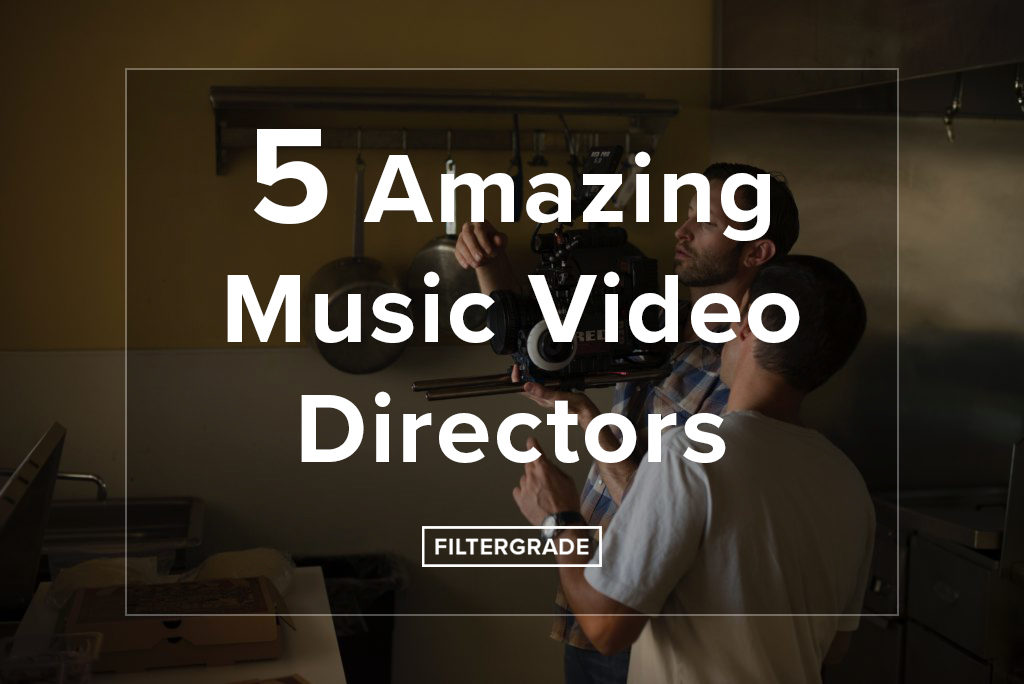 You’ve probably thought to yourself  “Wow, this music video is incredible”, at least once in your life. Amazed by the storyline and the visuals, you sat watching intently at how awesome and probably how time-consuming the video was to actually make. And you’re right! A lot of time and effort goes into producing great music videos. So who are the best of the best when it comes to orchestrating all of it? Let’s take a look at 5 amazing music video directors to help you get a feel for their work and some of their most notable videos.

What is a Music Video Director?

To simplify it, a director is someone who guides and controls the entire video (filming) process. They are in charge of making sure the direction of the video is running smoothly and ensuring the video’s artistry remains intact. They also supervise the video crew, actors and artists, and hold other responsibilities specific to the production. Moreover, it’s likely that you might not be familiar with directors. Although the artists are the centerpiece of videos, directors are equally, if not more, important. Listed are 5  Amazing Music Video Directors in the industry today.

Beginning our list is David Fincher. Not too many entertainers can lay claim to a Grammy, let alone two Grammy Awards. Yet, Fincher has accomplished just that – Twice! The Denver, Colorado native has worked on videos such as “Twice Upon a Time” (1983), “Return of the Jedi” (1983), and “Indian Jones and Temple of Doom” (1984). His music video background is often sidelined due to his great film productions.

His two Grammys come from working on “Love is Strong” by the Rolling Stones (1995) and, second, Justin Timberlake and Jay-Z’s “Suit & Tie”. Along with the double Grammy whammy he’s also earned three MTV Video Music Awards for Best Direction. Popular works from Fincher include; “We Don’t Have to Take Our Clothes Off”, by Jermaine Stewart; “Who is it” by Michael Jackson; and several Madonna projects like “Express Yourself”, “Oh Father”, “Vogue”, and “Bad Girl”.

His versatility in videos can be seen in other works such as Billy Idol’s “Cradle of Love” and “Only, by Nine Inch Nails”. Videos were directed 15 years apart but despite that, the immense creativity can still be found in both.

Next up we have Felix Gary Gray. Gray is an American director, producer, and actor. His notable influences in the music video world include works such as Ice Cube’s “Good Day”, Outkast’s “Ms. Jackson”, and other projects for artists like Queen Latifah, Cypress Hill, and Jay Z. He has directed well over a dozen videos.

Gray was born in New York City, raised in LA, his cultural impact in the black community has been recognized by many. As a result, Gray has garnered a plethora of awards such as; The Ivan Dixon Award of Achievement, received from the Black Hollywood Education and Resource Center; a Special Achievement Award by the African American Film Critics Association; an Artist Empowerment Award from the Artist Empowerment Coalition; and the Pioneer Director Award from the Pan-African Film and Arts Festival.

His work in the music industry has been minimal since his film career catapulted. After a series of successful film productions, Gray has worked predominantly on films. Despite that, he is still regarded as one of the best music video directors.

Third on our list is the youngest and yet as active as the rest, Melina Matsoukas. Matsoukas is an American-born music, film, television and commercial director. She holds two Grammy Awards for her work in “We Found Love”, by Rihanna, and the highly acclaimed “Formation”, for Beyonce.

She grew up in the Bronx, graduated from New York University’s Tisch School of Arts and completed her graduate work at the AFI Conservatory. Matsoukas has become one of the most notable music video directors in the business. Her projects include artists such as Ne-Yo, Kylie Minogue, Solange, Lady Gaga, Eve, Pharrell, Whitney Houston, Robin Thicke, and many more.

Not only does she hold a Grammy and other awards for her work on “Formation” and “We Found Love”, Matsoukas has also earned awards and nominations for several other projects including; “Pretty Hurts” by Beyonce, earning an MTV Music Award for Best Director nomination; Music Video Production Awards Best Direction of a New Artist for “Losing You” by Solange; and a UK Music Video Awards for her work on “Bleeding Love” by Leona Lewis.

Adam Spiegel, recognized in the entertainment industry as Spike Jonze, is an American music and film director. He is known for his involvement in BMX and Skateboarding. He began his directing interests as a child, filming when and where he could. Subsequently, his professional career began in 1992 working on projects with Wax, Chainsaw Kittens, and Sonic You. Additionally, he later added Weezer, Beastie Boys, Mc 900, Velocity Girl, and Marxman, amongst several others, to his rap sheet.

His list of Accolades is extensive, noted as one of the most decorated music video directors in America. In 1999 alone, he received 9 awards and over 10 nominations for his work on “Being John Malkovich”, which earned him an Independent Spirit Award for Best First Feature. Following his early success, in 2002, “Weapon of Choice”, by Fatboy Slim, earned him a Grammy for the Best Music Video.

Spike entered the industry as an extreme sports photographer/videographer. Today, Spike continues to use his love of directing to showcase his talents as he recently finished the video for Karen & Danger Mouse “Woman”.

Lastly, but definitely not least we have Harold “Hype” Williams, known as Hype Williams, who is an American music video director who was born in raised in Queens, New York. Hype’s relationship with the hip-hop and R&B scene began in 1991. He is mainly credited for his video collaborations with Kanye West and as a result, has achieved many accolades for his work. He earned a BET Award for Best Director on for “Gold Digger”; Busta Rhymes’ “Wooh Hah!! Got You All in Check”, earned him an NAACP Image Award; an MTV Video Music Award was given to him for Best Rap Video for the production of Will Smith’s “Getting Jiggy wit It”; Best Group Video from MTV with the production of TLC’s “No Scrubs”; and the Michael Jackson Video Vanguard Award by MTV for his work as a filmmaker.

Hype’s impressive credentials have touted him amongst the best Music Video directors and arguably one of the best African American directors. His collaborations include Slim Thug, Ne-Yo, LL Cool J, Beyonce, Aaliyah, Missy Elliot, and many more.

The music entertainment industry is very competitive. One common trend all great directors share is the flexibility to work on different projects. Even if it means extending into different genres, and collaborating with other artists and directors. Flexibility is key and these 5 amazing music directors have capitalized on that.