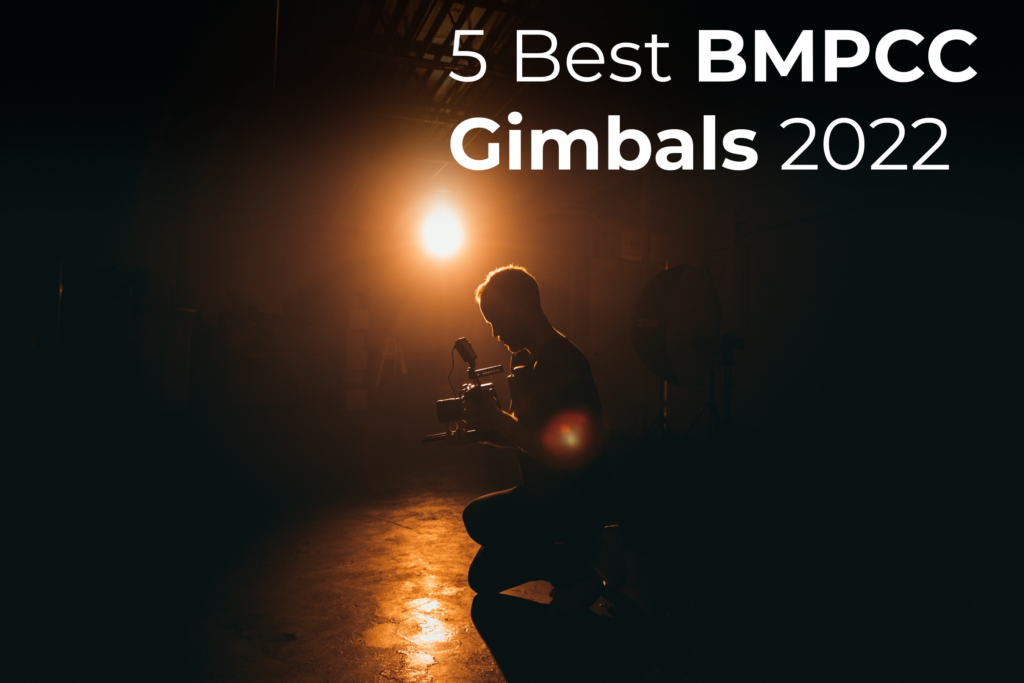 If you’re looking for a gimbal to stabilize your Blackmagic Pocket Cinema Camera (BMPCC) then you’ve come to the right place! A cinema camera as nice and as versatile as the Blackmagic deserves one of the best gimbals. So here are some of our favorites and what makes them great choices.

DJI is a well-known name in the gimbal world for a good reason. This is a 3-axis gimbal that ensures your BMPCC footage will be as stable as possible. It uses what DJI calls the Titan Stabilization Algorithm to increase stabilization, and it uses SuperSmooth mode to compensate for movements. It stabilizes up to 100mm lenses. You’ll be pretty comfortable using it, with its reasonable size and light weight, built-in OLED screen, and smooth grip. The fast-charging battery can run for around 12 hours, making it able to last through most shoots. Additionally, it can support 10 pounds of camera weight. The only downside might be its price, which comes at a blistering $849, much higher than other gimbals. But if you want the best of the best, the DJI RS 2 has a compelling feature set.

Okay, let’s get a little more reasonable and look at a DJI gimbal that won’t break the bank. Coming in at $499, the RSC 2 includes most of the same features of the more expensive variant. The battery lasts a bit longer ar 14 hours, but the max payload goes down to only 6.6 pounds for this model. Since a BMPCC 4K body only weighs around 1.5 pounds, this still gives plenty of room for large lenses and accessories. You’ll enjoy the same stabilization algorithm as the more expensive model, and you can fold this model to be more portable.

The Moza Air 2 is a popular gimbal for the BMPCC. It has a payload of 9 pounds, letting you use just about any camera and lens combo. Moza has revised its power supply, offering four individual batteries that make the gimbal last for around 16 hours. It has multiple inputs and outputs for powering different cameras and other accessories. It’s a heavy gimbal but is designed to be used one-handed, which could be a downside. It also features an OLED screen with a simple menu for setup. However, one of the best features is its set of time-lapse functions for different styles and speeds of time lapses. Its $499 price tag makes it reasonable and competitive with the above DJI RSC 2.

This gimbal includes a simple feature – an attachable handle so you can use the gimbal in a 2-handed mode. Additionally, the gimbal is fairly light but has a fairly high payload weight by comparison. It weighs 3.66 pounds but boasts a payload weight of 10.14 kilograms. It quotes a battery life of 12 hours. This gimbal also has a touchscreen panel, joystick, and wheel, allowing for easy adjustment of various settings in ways that make sense. The pricetag is a little higher at $699, but that’s because it includes a ton of accessories such as the handle, remote control, and follow focus. While overall this product seems great, there are many negative reviews online that reference issues with the motors and the mobile app, so you might be rolling the dice with this product despite its many great features.

The Crane-2S can easily handle cameras like the BMPCC with accessories attached. The motor control algorithm and motor power have heavy cameras in mind. Its FlexMount system is designed to simplify setup regardless of how many cameras you want to switch between. The gimbal features an easy vertical mount setup to easily record social media content. It includes a 0.96-inch OLED screen to browse settings. It includes various timelapse features such as panorama and long exposure timelapse. The gimbal has six modes like following and locking, so it’s incredibly versatile.