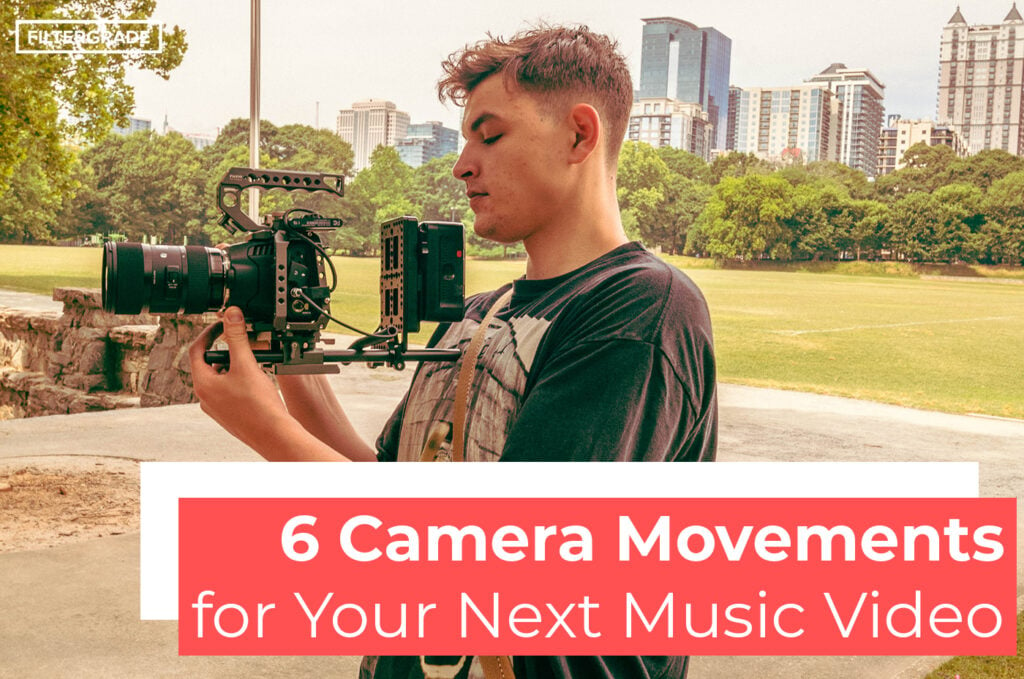 Shooting video, unlike photography, requires different movements and motions to help create different realities inside the film. Where shutter speed will play a massive role in the ‘motion’ of a photograph, the movements you use while filming your video will help you tell your story in a unique way.

In this article, we’ll be covering 6 ideas for camera movements to try out in your next music video or short film!

Panning is one of the most well-known camera movements in the game. From left to right, or vice versa, show your viewers what you’re seeing. These are great for establishing shots or wide shots to show the viewer your scene.

Tilt is nearly the same as panning; however, instead of moving your camera left/right, tilting is when you only move your camera up/down. Tilting is great for showing buildings, mountains, etc… to show the scale or size of what you’re filming.

The next camera movements on our list are called ‘Pedestal’ and ‘Truck.’ For this first movement, ‘Pedestal,’ you’ll keep your camera on one vertical axis, and move up or down to show your subject. This movement is similar to ‘Tilting’, but instead of tilting up or down, you will fix your camera so that it’s perpendicular from your subject, and move the whole camera up/down.

‘Trucking’ is nearly the same as ‘Pedestal’; however, instead of up/down, you’ll be moving side to side. Instead of the rounded out motion of panning, you’ll keep your camera fixed perpendicular to your subject and truck side to side, similar to driving a truck forward or backward and only looking out of the side window.

This is one of our favorite movements for music videos – the roll. Rolling can turn any dull scene for a music video into something interesting and engaging.

Many directors and cinematographers have found this rolling movement to be overused, but when it’s used properly it can really enhance a scene.

Also, something to note for this roll movement is the difference between shooting handheld, with a stabilizer, or with a crane. With a stabilizer or crane you will get smooth, crisp rolling motions that can make your production value go way up. Because of this, many filmmakers will avoid rolling movements unless they have a stabilizer or crane. I, on the other hand, advocate for trying all of these motions handheld. Obviously it won’t be perfectly smooth, but sometimes the handheld motion will help amplify the song that you are shooting for. It all just depends on your own preference.

Another well-known camera ‘movement’ is zooming in or out. This perspective goes all the way back to the start of motion picture films.

Think super 8 cameras – remember all of those old home videos you’ve seen with the moving border on the side – what’s one thing you always notice? Dad always zoomed in or out while capturing the family memories.

‘Why?’ you ask. These super 8 cameras were some of the first widely-used video cameras… and they just so happened to feature a zoom button/slider – something that was not so common back then.

Back then, when there were only a few buttons on your camera, you wanted to try them all out to see what they did. Nowadays there are so many different buttons and internal tools on cameras that sometimes we forget the basics.

Challenge yourself on your next project to shoot with a zoom in/out motion. I always find it interesting how challenging myself to move differently will make for such a different final video.

Another essential ‘movement’ for cinematic effects is actually a lens adjustment. For this method, you won’t need to move your camera, but instead, you’ll need to pull in/out of focus and then catch on sharp focus.

This ‘movement’ offers a life-like blur faded into focus just how the human eye would normally act.

Place an apple on a table in front of you. Now look directly at the table while the apple is in your peripheral vision. Start to move your eyes back and forth between the table and the apple. Notice the way your eyes focus in and out – this is what you should try to recreate with your camera for realism/naturalism.

10 of the Best Teleprompters for Video Professionals

How to Zoom In on Premiere Pro

The Best Cameras for Streaming

How to Find a Job as a Newbie Motion Designer

Top 10 Glitch Intros for After Effects