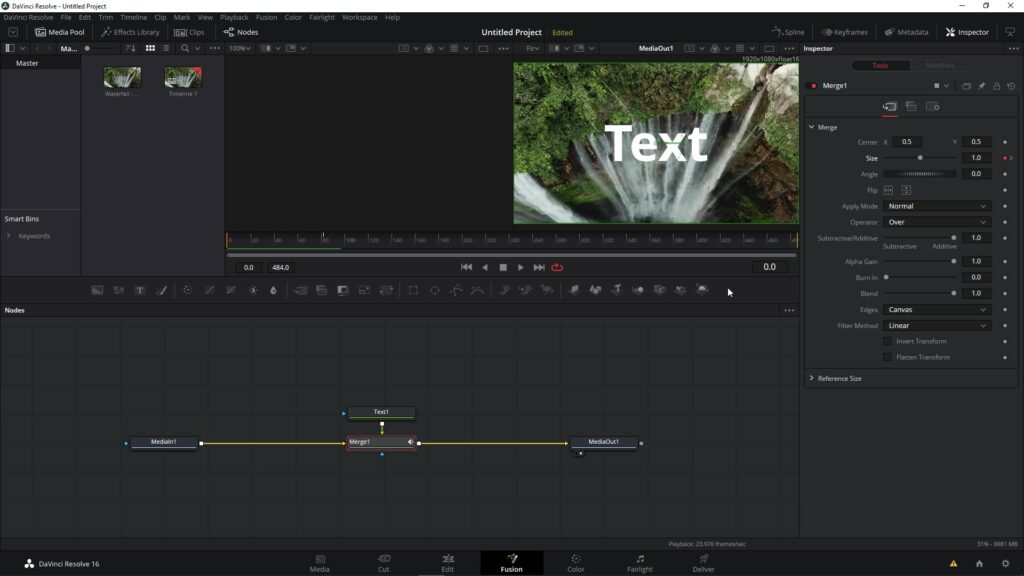 Today we’re expanding upon our existing DaVinci Resolve tutorials to show you how to create animations, all the way from the most basic animations all the way up to the tools you need to create advanced animations.

For those moving from Premiere Pro, you’ll be happy to know that basic animation controls are similar in Resolve, but unfortunately the basic implementation in Resolve is less intuitive. In Premiere Pro, you can just go to the effects control panel, but it’s slightly harder in Resolve. Resolve’s Edit panel is not really designed for motion graphics and animations, so getting it to do the things you want to do is going to be a little more difficult. If you’re serious about motion graphics and animation, we’d suggest using Premiere Pro and After Effects, or using Resolve’s Fusion panel, which we’ll talk about later in this video.

The most basic and common graphics in resolve are text titles. From the Edit panel, click on Effects Library, Titles, and drag a Text title onto your timeline. In the Inspector panel, you can adjust things like font type. But you can also start doing some animation.

In the Inspector window, look for Position. Move your playhead to where you want the animation to begin, and set a keyframe by clicking on the diamond symbol next to the property. Now that you’ve added a keyframe, the animation logo will appear in the very bottom right of the layer. Click on this to expand the viewer and see all of your keyframes. This will show all the keyframes on one line though, so expand this by clicking the arrow on the side. Now you’ll be able to see all of the animation properties that you’ve added, and no more. This is kind of like the effects control panel in Premiere Pro, except it only shows the properties that are being edited.

Move the play head somewhere else and change the property to a different number. So for example, create a second Position keyframe in a different position, then play it back. Your layer will move across the screen, and if you want to adjust it you can either change the numbers while your playhead is on the keyframe, or you can drag a keyframe to make an animation shorter or longer.

One thing that really sells an animation and makes it look natural is keyframing easing. This makes the animation ramp into and out of an animation. Objects in real life have to ramp up in speed, they don’t just start moving at a consistent speed. Unfortunately for Resolve users, this feature doesn’t work reliably. To add an ease to a keyframe, just select and right-click the keyframe, then select Ease In or Ease Out, whichever shows up. But as we can see when doing it on a Position keyframe, Resolve just doesn’t do it.

You can create an animation for zoom, rotation, opacity, and more. A more advanced animation will combine these different properties and use them in tandem.

Let’s try a zoom animation, and use eases on it. We’ll create our keyframes, then right-click to ease them. As we can see, this works just fine, and creates a smooth animation. You can actually have a little bit more control over the animation. Click on the graph symbol next to the keyframe symbol. Now you can see the animation curve. Select the nodes and you will also be able to adjust the curve slightly, to change how aggressively the speed ramps, and in what way. This will give you the finest control over your animation, while still keeping it simple. 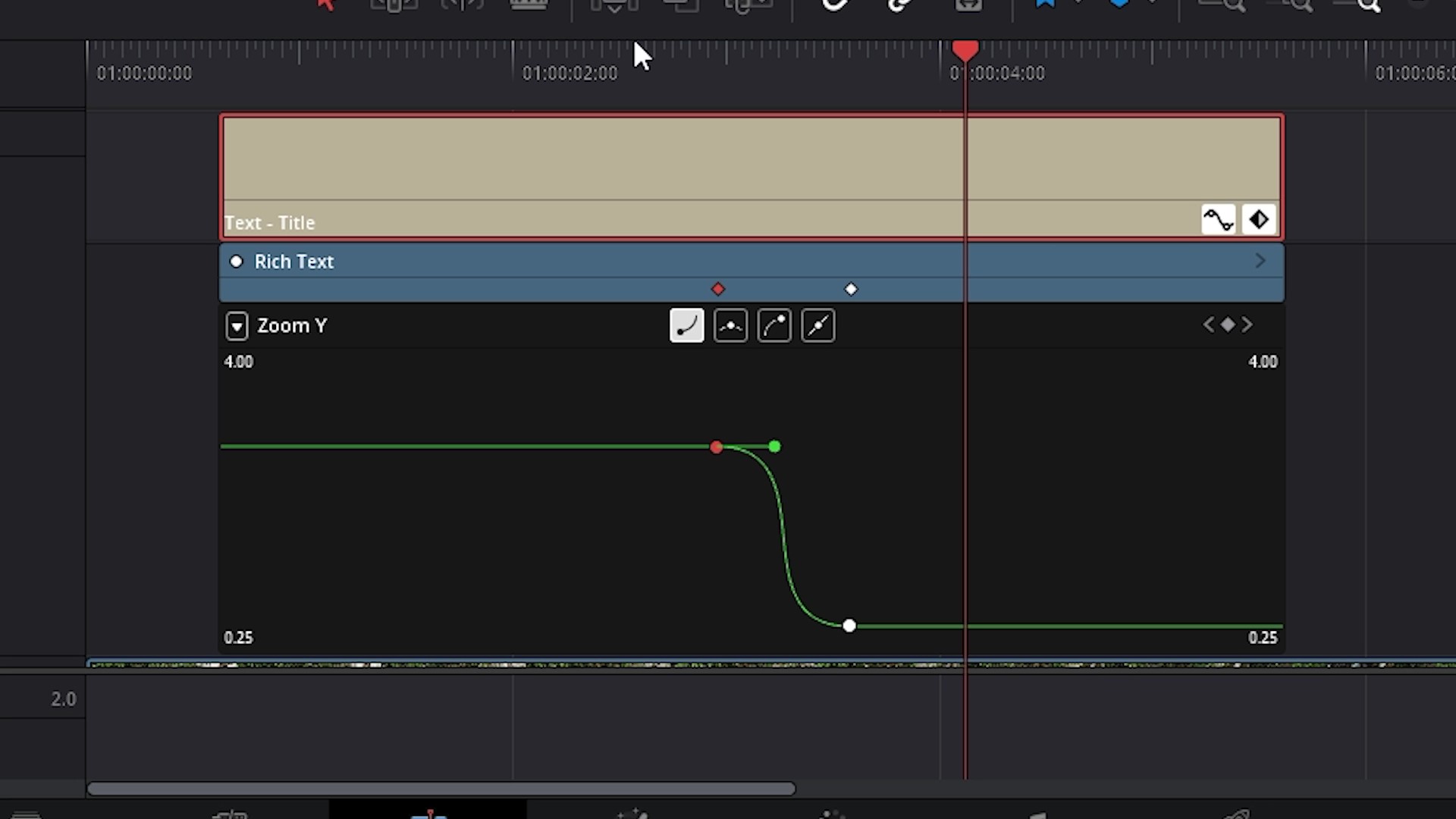 To move a keyframe, simply select it and drag it. If you want to delete a keyframe, select that keyframe and press the Delete key.

Moving on from keyframes, if you want to do a simple animation, you might just want to use a preset one. In the Effects Library, open up Video Transitions, and select any of them. Let’s just do a simple Cross Dissolve. This transition can also be achieved by creating an opacity keyframe animation, but using this preset is just easier. Simply drag the preset onto the side of the clip you want the transition to happen on, then you can drag it out to change the length. You can even click on the keyframe symbol to gain access to the curve chart and adjust the animation as you see fit.

So that is basic animation in Resolve. It doesn’t work quite as well as Premiere Pro, at least in its current form. But where Resolve shines in animation is their more advanced tool, called Fusion.

Fusion is one of the pages at the bottom of Resolve, and it’s where a lot of the advanced tools live. It’s a little bit using After Effects, except it all happens within Resolve itself.

With a clip selected in your timeline, click on Fusion. You’ll see your footage in a viewer window, as well as some nodes. Fusion does not use layers, it uses nodes. Rather than stacked layers, you are working with a set of instructions. Confused? Don’t worry, we’ll break it down.

A node is just an instruction. Think of it like a filter, that you can stack more filters on top of. By default, you’ll have two nodes, Media In and Media Out, which tells Resolve to bring IN the clip you selected, and then render it OUT – a fancy way of saying, these two nodes play your main video clip. 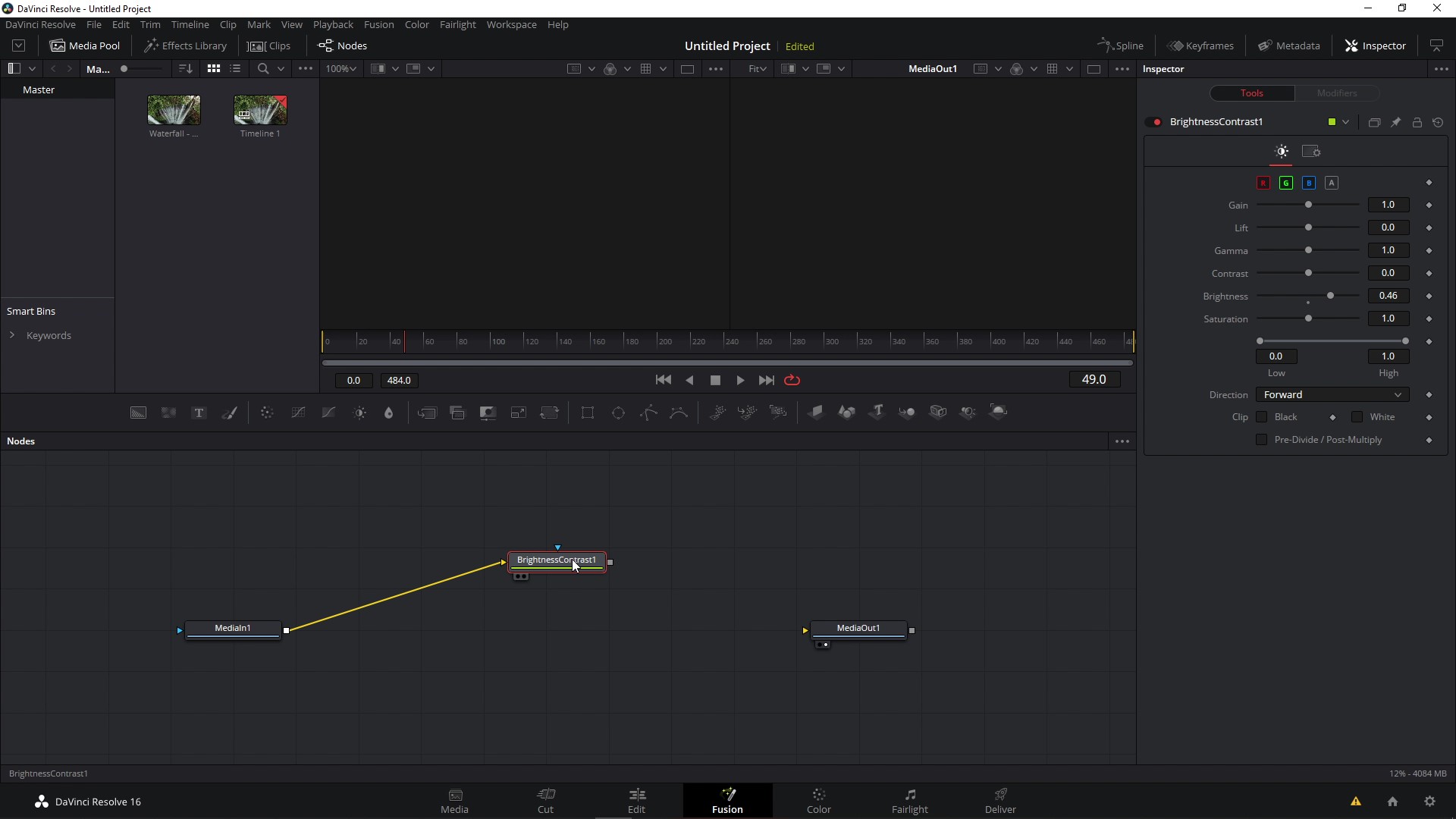 To add a node, click and drag something from the toolbar into the node window. Let’s do Brightness and Contrast. With that new node selected, you’ll see its settings in the Inspector window, but if you change the values, nothing on your image will change. That’s because we need to set up the nodes so that they can interact with each other. This new node isn’t connected to anything, so Fusion doesn’t know what you want to do with it. Hover your mouse over the line between your Media In and Media Out nodes, and click on the right side to remove the line. Now drag a line from the Media In node to the Brightness node, and then from the Brightness node to the Media Out node, and your effect should be applied. You drag out from the grey square symbol and drag into the yellow insert arrow, so it’s hard to do this wrong. The blue arrows are masks, but we don’t need to worry about that at the moment.

So, if you understood this basic explanation of nodes, the rest of this shouldn’t be too difficult for you. We’re just going to be building off of this basic structure.

Now let’s add some text. Since we don’t have layers, things are going to get a little weird. Drag the text tool into the node area, and type some text into the text box in the Inspector. To add it properly so that we can actually see it, we need to use a merge node. These nodes are used rather than layers in order to tell Fusion how things should be stacked. Go ahead and drag in a merge node. Remove the line from the Brightness node to the Media Out node. Then drag a line from the Brightness node to the yellow input on the merge node. Drag a line from the text node to the green input on the merge node. Green is above Yellow in the layer hierarchy, so this will place the text above the main footage in this case. You can also create a merge node simply by dragging a line between the grey square of two other nodes, which can save a lot of time.

So now that you know how to use basics, let’s get into animation!

Animation works in a similar way to the basic animation we started this video with. In the inspector, you’ll see attributes that can be keyframed. Click on the diamond symbol to set a keyframe for that attribute at that time. You can control the time right under the clip preview. Move to a different time and change the slider in order to create the animation. Now when you play back between those two points, you’ll see the chosen property animate.

To adjust the animation, open up the Spline tab. Select the checkboxes for the categories you’d like to edit, then select Zoom to Fit. Now the graph should make sense. You can drag each end of the animation in order to create more of a curve. To create a default ease in and ease out, just press F on your keyboard with the node selected. To set it back to default, just click on the

Now we’re going to grab the Rectangle tool to make a simple mask. Connect this to the text layer, then use keyframes to animate the height property. This will create a mask that opens up and reveals the text over time. And this is a great time to show the power of nodes over traditional layers. Drag a line from our rectangle mask onto the Media In node. Now that animated mask will apply to both the text AND the main video. You can do this with any node of course, and it’s great for applying the same effect to multiple things.

Fusion is your gateway to doing animation and motion graphics in DaVinci Resolve. There is a lot to unpack in Fusion, since it’s kind of like After Effects in terms of complexity, but hopefully this tutorial gets you started down a path of experimenting. Fusion’s tools are logically-based, so you can arrange and stack nodes in some creative ways, but also be confident that it always works in a predictable and easy to understand way. Let us know in the comments down below if you want to learn more about Resolve and specifically Fusion from us in the future.