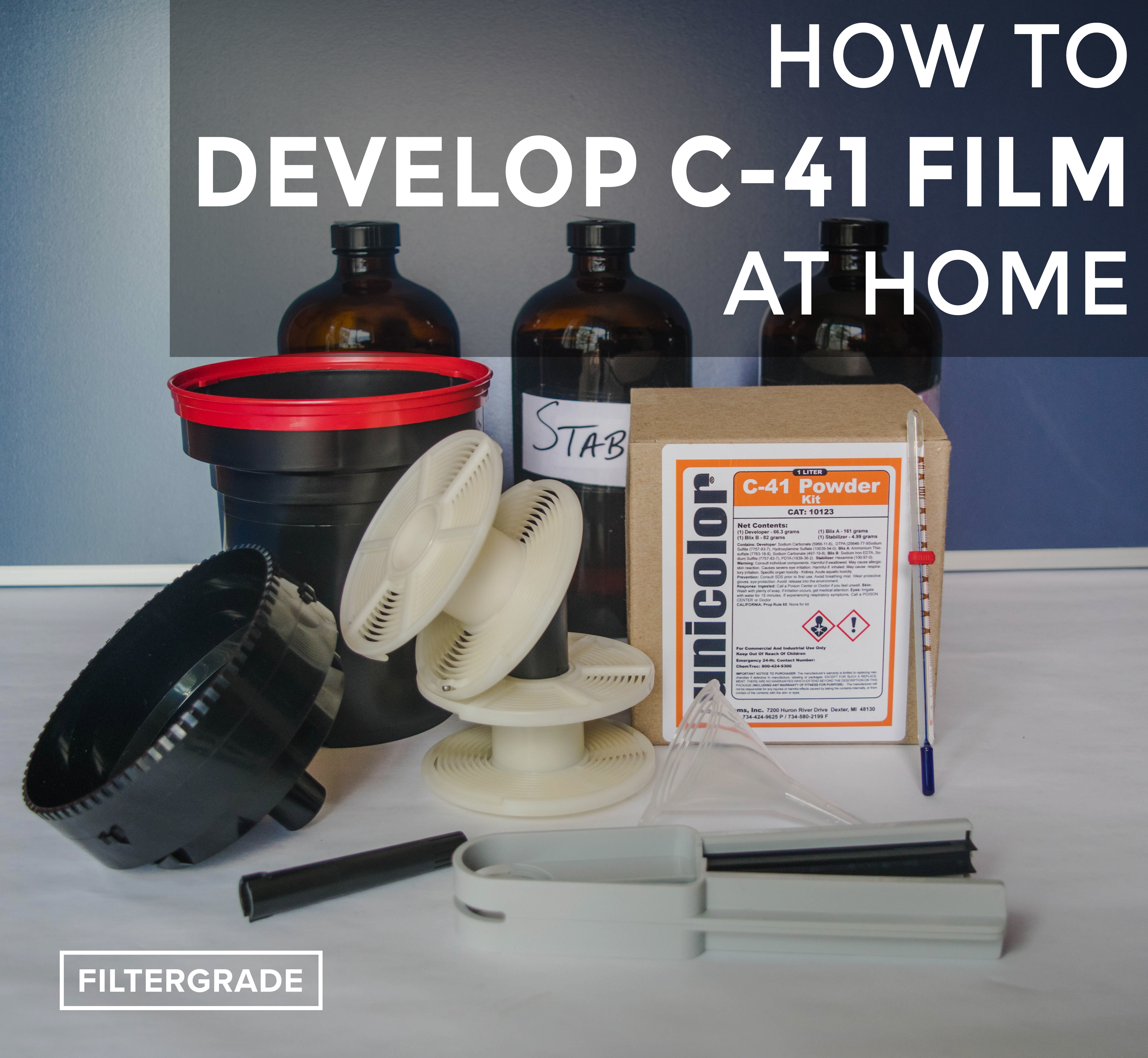 Today we’re going to be looking at developing film, specifically C-41 film. Most color films and some black and white films are C-41 film, so this process will apply to a lot of different kinds of film.

How to Develop Film

To get started before you can develop your film at home, you’re going to need some things. It may cost a bit upfront, but the investment will be worth it as long as you plan on using the equipment.

Let’s take a look at the equipment you’ll need. 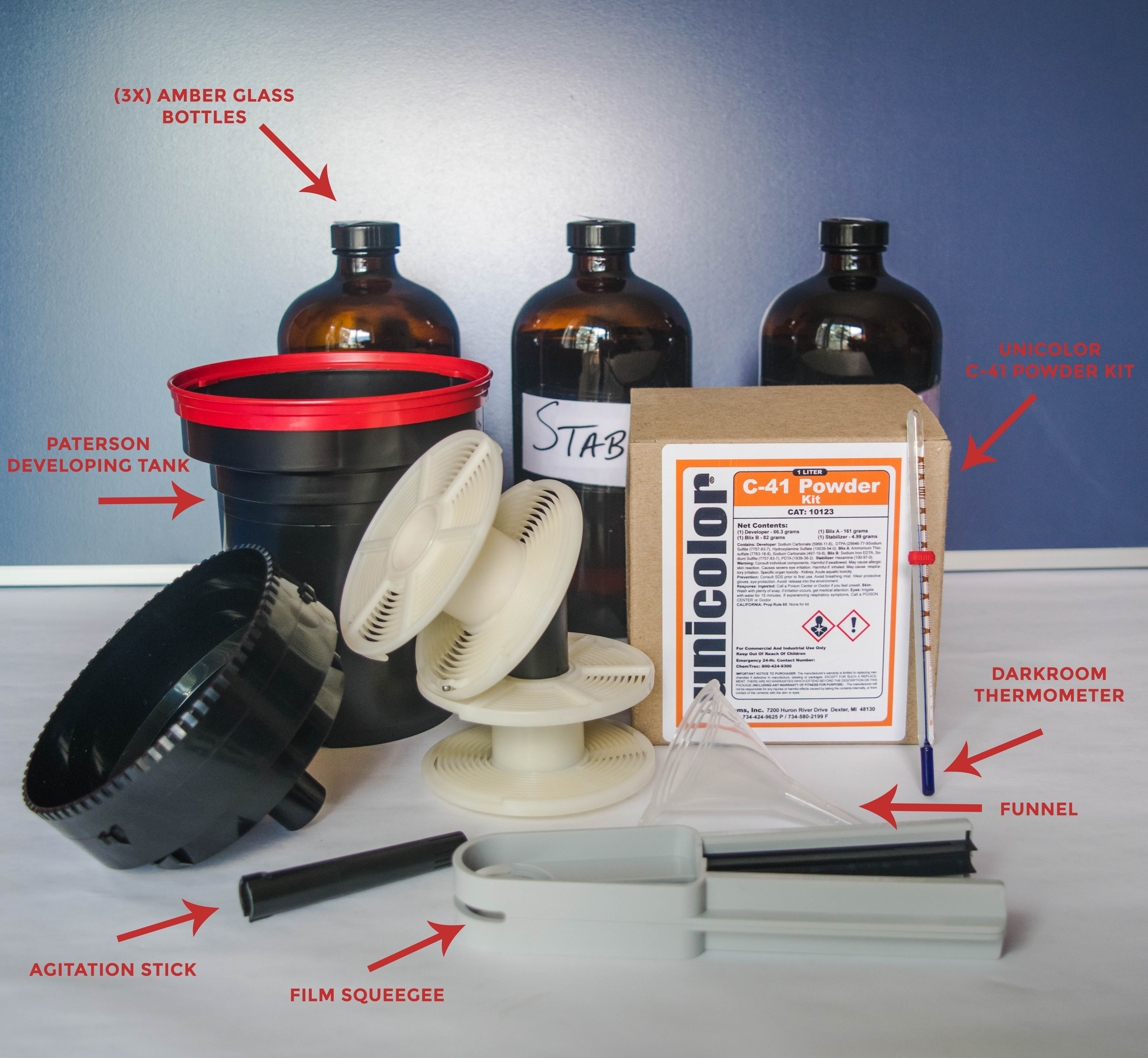 Now that you know what equipment you’ll need to develop your film at home, let’s get into the developing process, looking at all of the details from start to finish to help make sure your developing process is smooth and swift.

Before you even take the film out of your camera to get ready to develop, you’ll first need to mix your chemicals. For me, this is the most tedious part of developing film at home and it can get quite annoying if you develop a lot. With that being said, you still have to do it, and doing it precisely will make all the difference so pay close attention to detail. 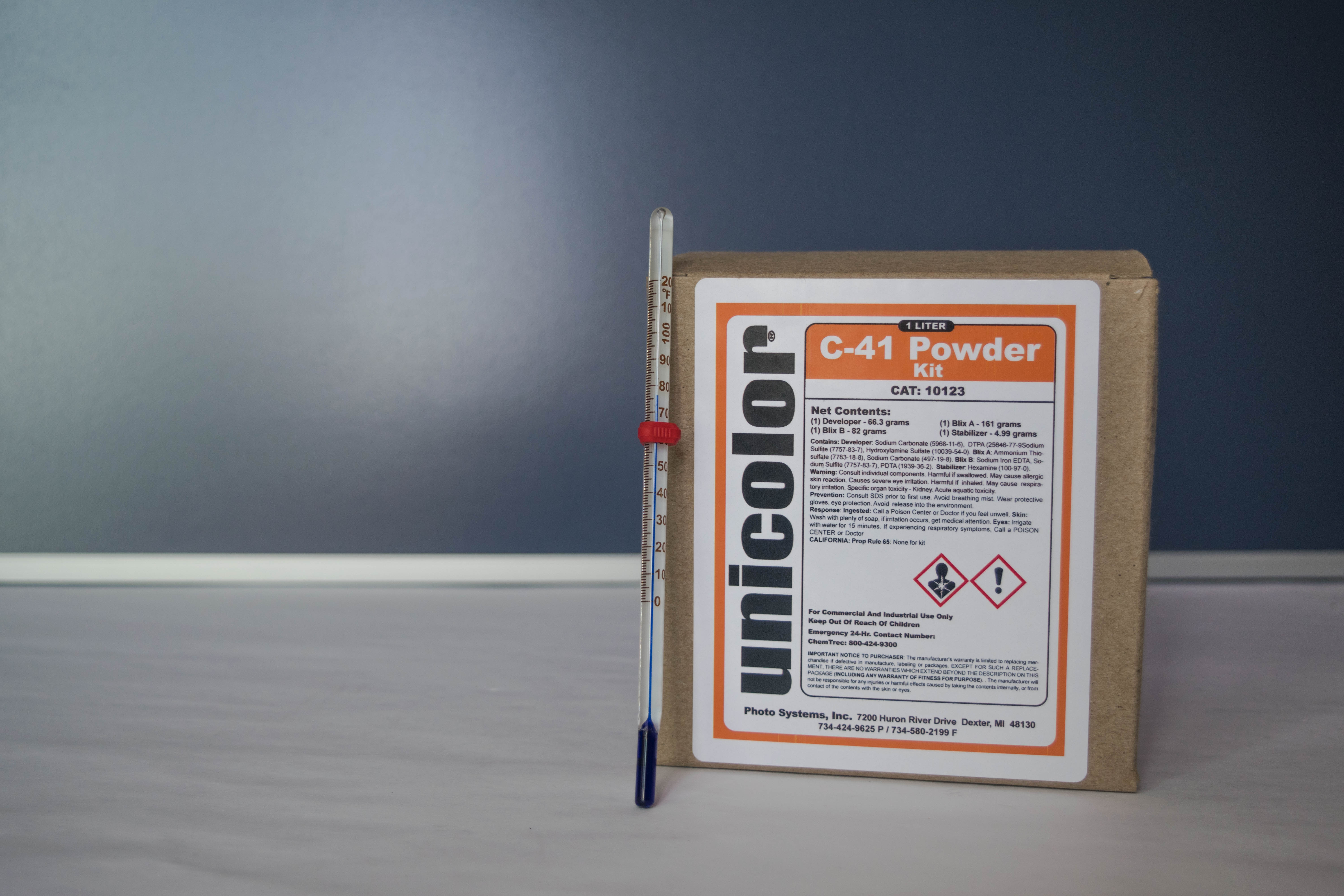 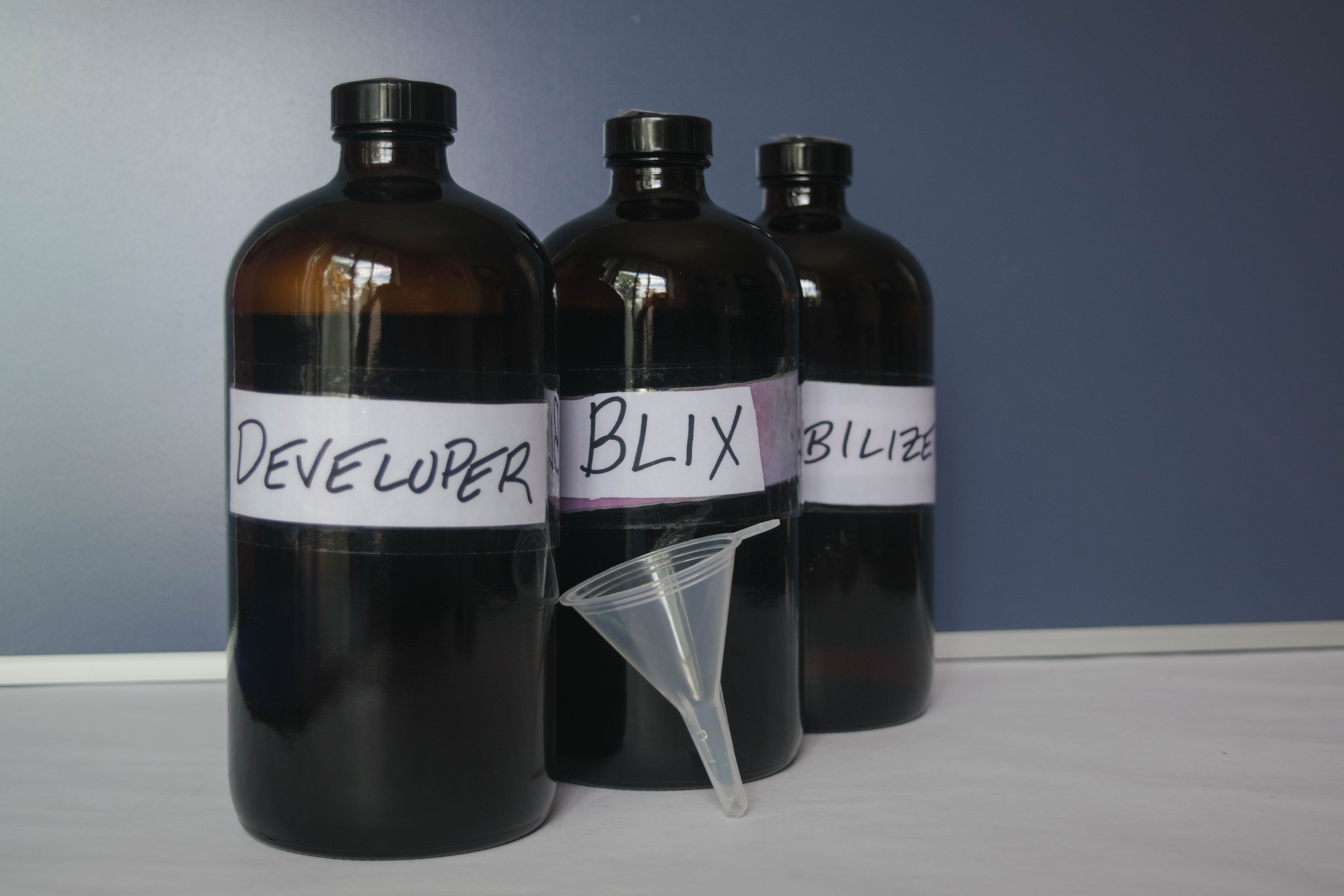 While mixing your chemicals you’ll need to have your darkroom thermometer, your amber glass bottles, the Unicolor C-41 Powder Kit, and a liquid measuring cup.

Starting with the developer, place 800 mL of water at 110°F into a clean glass (or plastic) container. While you’re stirring the hot water, add the Developer powder contents and stir for about a minute or until the solution is mixed through. After the solution is mixed, add 200 mL of water at 110°F to make it an even 1,000 mL. From here you can then transfer the chemicals into your amber glass bottle.

You will need these amber glass bottles for storing your chemicals because they are light sensitive and air tight. This is critical because you do not want any water or other fluids getting into your solution and you also will need to make sure that no light is able to be shining into the containers for a prolonged period of time so that you can retain quality

Next, grab another clean glass container and place 800 mL of water at 110°F into it. Begin stirring while you add in the packet marked Blix A. Once the packet is empty continue stirring and add in the packet marked Blix B. As you pour these powders into the water there will be an endothermic reaction so it is critical that you stir the solution while pouring it in. After the solution is thoroughly mixed through, add in 200 mL of water at 110°F and then transfer it into your amber bottle.

While transferring your chemicals into the amber bottles, it is important to make sure that they are marked ‘developer’, ‘D’, or whatever works for you, just as long as you know what solution is in each bottle.

Lastly, add 1,000 mL of water at room temperature into a clean glass container. From here you can add the pack of powder marked Stabilizer and stir thoroughly. Once you have transferred the chemicals into the amber bottle, let this sit at room temperature for your next use.

Now that your chemicals are ready, you are almost ready to start actually developing. First, you’ll need to get your film into your Paterson tank so you can begin developing.

For this step of the process, you’ll need a darkroom or a darkroom bag, your choice of film, a bottle opener, and the Paterson tank with lids and reels.

Before turning off the lights in your darkroom, set up your equipment in an orderly fashion so that you know where everything is and you work effectively. This will make it much easier on you so you aren’t feeling all around you to find everything like Velma without her glasses.

Once you have setup your equipment in the darkroom, kill the lights and cover up any light that might be coming into your homemade darkroom and grab your roll of film because it’s only uphill from here!

Grab your roll(s) of film and begin by popping the top off using your film cassette opener, or in many cases, just a bottle-opener. After the top comes off, slide the roll of film out of the canister and find the end of the film. Once you have the end of the roll, lead it into the grooves on the Paterson film reels. It may take a few tries, but once you have both edges of the film in the film track, begin cranking the reel so that the film begins winding around the spool. If you are having trouble with loading the film onto your reel, try cutting the edge of the film so that you have an even edge to place in the reel, rather than using the curved edge along the end of the film stock.

After the film has been taken up by the reel, cut or rip off the plastic spool at the end of your roll of film. If you have more rolls of film to add to other reels, continue to do so until you are finished loading your film onto the film reels.

Once the film is loaded into the reels, you’ll need to put them into your developing tank and place the light-tight lid on the container and turn clockwise. After this, I then place the air tight lid and head over the sink where I will begin developing my film. Once the light tight lid is sealed on your developing tank feel free to turn on a light and take a deep breathe. You’re done with the first step, and when you’re just learning to develop this process can be tough. Just know that it will get easier over time, as your hands will become familiar with working through the steps, even in the dark.

To begin your developing process, you need to ensure that everything is at the correct temperature before you start. Start by placing the Developer and Blix into a bucket of hot water and wait until they are at 102°F. Once they reach this temperature, you are about ready to go.

To make this easier for you to comprehend, I will list out the next steps with specific times and temperatures to help you get the best results:

Now that you’ve hung your film up to dry out, you’re done developing your film at home! Once the film is dry, go ahead and cut it into strips and get ready to scan your images so you can see the results in digital form.

Let’s take a look at some of the benefits of developing film at home.

Control is one of the biggest reasons photographers prefer to develop their own film. If you do it yourself, you have the option to make your photos give off a warm tone or a cooling effect. You also have the ability to bring your photos to pure clarity unlike a film lab thats may not have your best interest in their mind.

Regardless, developing film at home is very effective and beneficial so give it a try and tell us what you think!

We hope that you learned a lot from this article and begin developing your own film at home. :) If you have any questions or suggestions, feel free to leave a comment below.

To learn more about film photography, check out some of our other articles including: