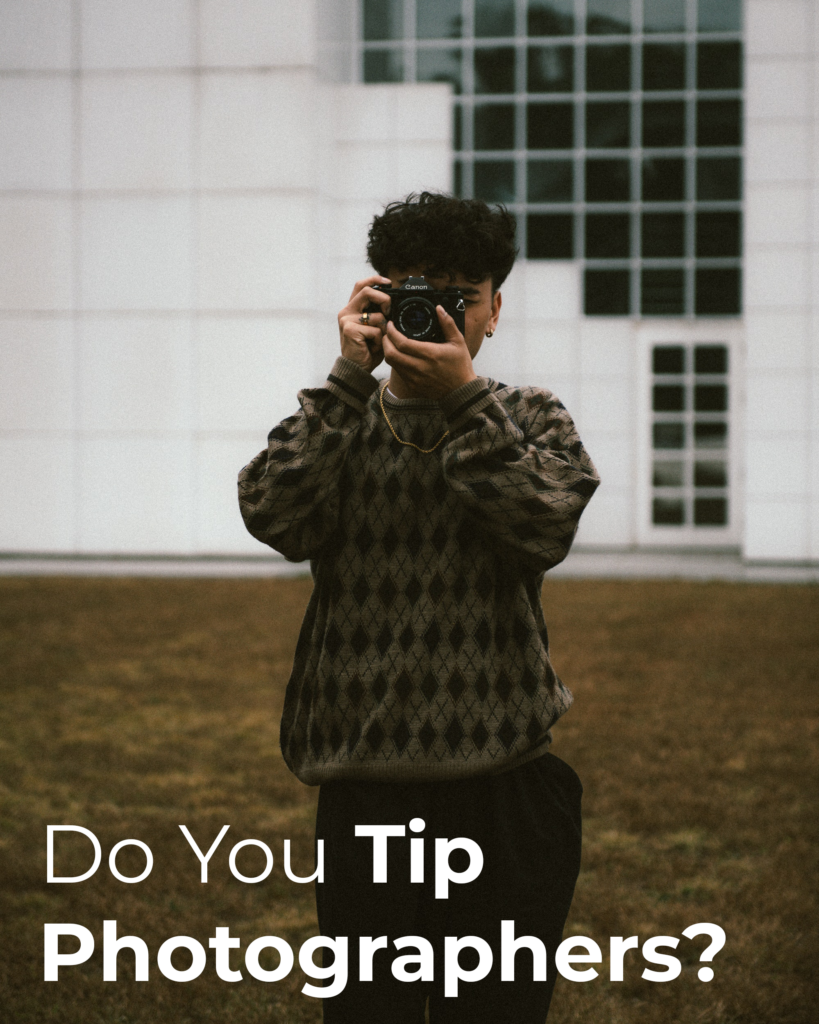 The world of tipping is a confusing social minefield. Why is it customary to tip baristas at coffee stands but not cashiers at the grocery store? It seems almost random when it comes to who society expects us to give tips to. There are some wider social issues here, such as bartenders not getting paid even minimum wage because they are expected to make up for it in tips. But today we’ll be discussing whether you should tip a photographer, and how to do so.

The Culture of Tips

Notably, this is all written from a United States perspective. The United States has one of the highest expected tip rates (at least in regards to restaurant wait staff), and European countries vary from no tips at all to very small tips as the norm. The question of “do you tip your photographer?” is being answered from the perspective and context of a society that expects tips for certain services. If your country doesn’t really do tips, then you probably won’t be tipping your photographer either.

What are Tips For?

Tips (also called gratuity) are generally a little extra money that you can give a service provider on top of the normal payment charged. It’s a way of showing your appreciation for outstanding service. In some contexts such as restaurants, tips are expected. You’ll commit a social faux pas if you fail to tip high enough. On the other end of the spectrum, tipping can be seen as insulting or can even be illegal. For example, if you attempt to tip a member of law enforcement, you may see yourself getting arrested for bribery! And if you leave a tip at a restaurant in Japan, you will have a very confused waiter chasing you down to give you your money back.

In theory, tips should be an extra reward for good service that allows for low-paid workers to gain a bit of autonomy over their employers. In practice, tipping (especially in restaurants) is often based on more than just service, and can be discriminatory. It can also lead to some employees being unhappy. Servers get tips, but there is no way to tip a cook. And if the day’s tips are lumped together and split evenly, individuals who earned a particularly large tip may feel like they got robbed of their windfall. Regardless of how tips are distributed, someone might be unhappy.

Despite the many ways that tipping complicates things, service workers in the US earn billions of dollars per year in tips. This shows that money is moving through the economy and ending up in the hands of those who are often making near minimum wage and don’t have the ability to negotiate higher wages.

Why Don’t We Tip Photographers?

If you ask someone who they would tip, photographers probably wouldn’t rank very highly. So why do so many people tip wait staff without question? It comes from the fact that we assume most professionals who work for themselves are working at a livable rate. Wait staff get paid at or near minimum wage in a lot of cases. And we know that tips can help significantly.

However, we don’t tip doctors, software developers, or accountants, because we presume that they have rates set that ensure they will make a healthy amount off of providing a service. After all, there usually isn’t some greedy owner taking most of the money. If they rely on tips, they should just change their rate instead. Photographers are the same. Photographers don’t need tips since they get paid appropriately for their services already.

What Kinds of Photographers Would You Tip?

There is no obvious social custom for tipping photographers. And really there aren’t many for any sort of artist. The closest equivalent may be leaving tips for street buskers, but the analogy falls apart quickly – you don’t generally hire street buskers for a private show. But you might hire a photographer for a private photoshoot.

If you get your photo taken in a department store, as part of a school or work photo, or randomly on the street then you would be forgiven for not thinking of tipping.

You would also be forgiven for not tipping your wedding photographer or your photographer for any sort of private photoshoot. In these situations, you should expect that the photographer has priced out their services appropriately. But if you feel that they went above and beyond to provide a great experience, few photographers would refuse your offer of a tip.

Photographers online seem to agree that tipping a photography company is completely unnecessary. But tipping independent photographers could be appreciated, as they get 100% of that money. Freelancers work hard and it’s always good to show them your appreciation.

Can You Tip Too Little?

In restaurants, you may get worried about tipping too little and being offensive. In photography, that doesn’t really exist. Since tips are rarely expected, even a small tip on top of the service fee will be appreciated.

What Could You Tip For?

Tipping for better-than-expected service is always appreciated, but what are some examples? When it comes to something more involved like a wedding photographer, there are several.

Basically, if you feel like the photographer gave you a deal, or did more than you expected, don’t be afraid to ask how to leave a tip.

So, Do You Tip Photographers?

To round it all out: Tipping your photographer is not mandatory, but it is always appreciated!

Should You Ask for Tips?

As a photographer, should you ask for tips? Well, according to the internet, you should not. In a Reddit thread asking whether you should tip photographers, the general consensus is that a photographer who says they accept tips will come across as tacky and unprofessional. In fact, it may deter a client from giving you a tip! If you work for yourself, you should set a rate that gets you paid what you are worth. If clients want to give you a tip for exceptional work, then they can choose to do so and ask you directly about how.