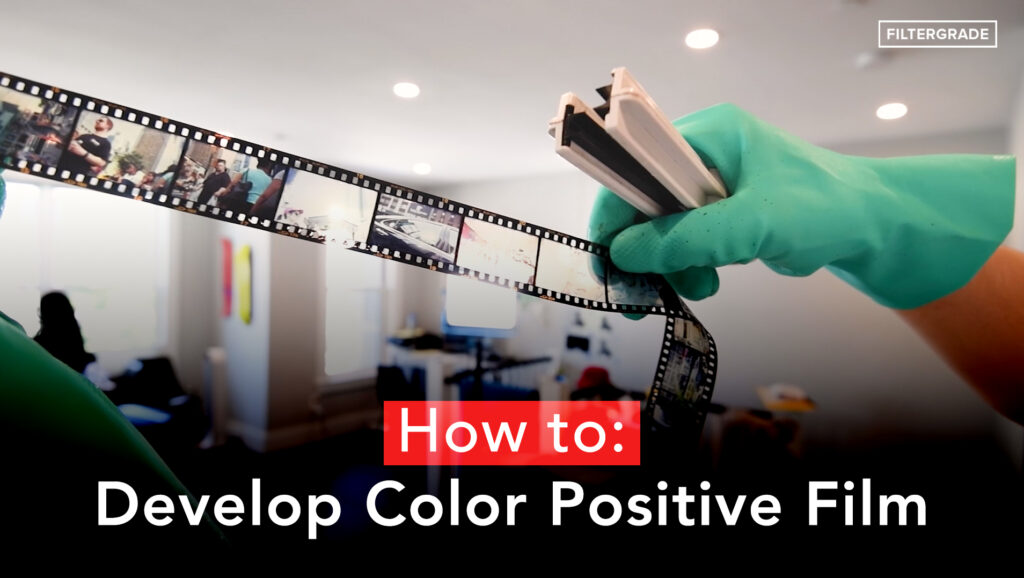 Now if you don’t know much about color positive (like how I was) then you’re probably thinking – ‘well, doesn’t all color film actually come out of the tank (physically)?’ Well, yes, but you can actually see color positive film without inverting the colors like color negative film. SO when you pull the film out of your tank, you will actually see visible photos with their natural colors. Check it out below:

When I saw that you can develop film and actually see the photos right out of the tank, it changed my whole mindset around developing. Especially because I have already learned color negative and black and white negative developing. It made me feel like I really gained some knowledge, now being able to develop three different kinds of film!

Materials You Need to Develop E6 Film At Home

Before you can actually develop color positive film (or any film), you’ll need the right equipment, and the right chemicals. Below I’ve put together a list of some things you’ll need to start developing and some additional items you might want to have just to make the process a little bit easier.

Lastly, before you get started, you’ll need to set the temperature of all of your chemicals to 105° F (41° C). You can do this by leaving your chemical bottles in a bucket with water set as hot as you can go.

So… now your chemicals are at the correct temperature, and your film is in your developing tank – let’s get started.

To get the full picture, you’re going to want to check out our video demo with Matt, but continue below to learn the step-by-step process! Plus, check out our E-6 Process Guide below the video to make it even easier when you start processing!

The very first step, as you can see in our guide above, is to wash your film (with running water) for 60 seconds. Now is a good time to put on your rubber gloves and your protective eyewear if you have them!

Next, you’re going to start the developing process. Turn off the water and pour out all of the water that’s in your tank still. Then you can pour your developer into the tank until full.

Once the developer (set to 105°F) is in your tank, you’ll be developing for 6.5 minutes. *NOTE* for this process, using Arista’s E6 Chemicals, you will have to add 15 seconds to the developing time after every 2 rolls*.

During your developing time, you should invert your developing tank a handful of times every 30 sec to make sure all of the film is evenly coated, and that the chemicals don’t settle at the bottom. See our video to watch what an inversion cycle looks like.

As you approach the end of your developing time, turn your water on and set the temperature to 105°F (to remain consistent) so that it’s ready for when your finished.

Once your developing time is up, pour the chemicals back into your developer bottle and put this bottle to the side to avoid confusion.

After your developer is put to the side, go ahead and place the developing tank under the water set to 105°F. Once your tank is filled with water, dump all of it out. Do this again 7-10 more times to make sure all of the chemicals are out of the tank.

Now that your tank is clean again, we can start the color developing process! This step will take 4.5 minutes, and you’ll be performing the same inversion cycles as you did with the first developing step. *NOTE: no time added to color developing stage no matter how many rolls*

Go ahead and pour your chemicals in and continue processing for 4.5 minutes. As you approach the end of your color developing time, set the water to 105°F again. Now pour your color developer back into its respective bottle once your time is up, and set this bottle to the side again to avoid confusion.

Next, repeat the same 7-10 water cycles to make sure your developing tank is clean.

The last main step (with chemicals) for this E6 Process will be the BLIX stage. This is the final bleaching process, and it will be a 10 minute step.

Start by pouring out any remaining water in your developer tank and then fill it with your Blix. Once full, put the lid on and process for the next 10 minutes. Be sure to use the same inversion cycles as in previous steps!

Now that you’re getting the hang of this, you’re probably already setting your water to 105°F when you’re about to finish with this 10 minute step. Go ahead and pour your Blix back into its bottle when you’re done.

Finally, you’re almost there. For the final wash process, I wash my film at 105°F for 5 minutes, letting the water run and dumping it out many times to ensure the film is fully cleaned from any remaining chemicals.

We really hope that you enjoyed this E6 Processing tutorial. If you learned from it, be sure to share with another film friend :)

Also, be sure to keep up with Matt’s work for more developing, film cameras, and Super 8!

Scanning Methods with the Epson V550

How to Rent Camera Equipment