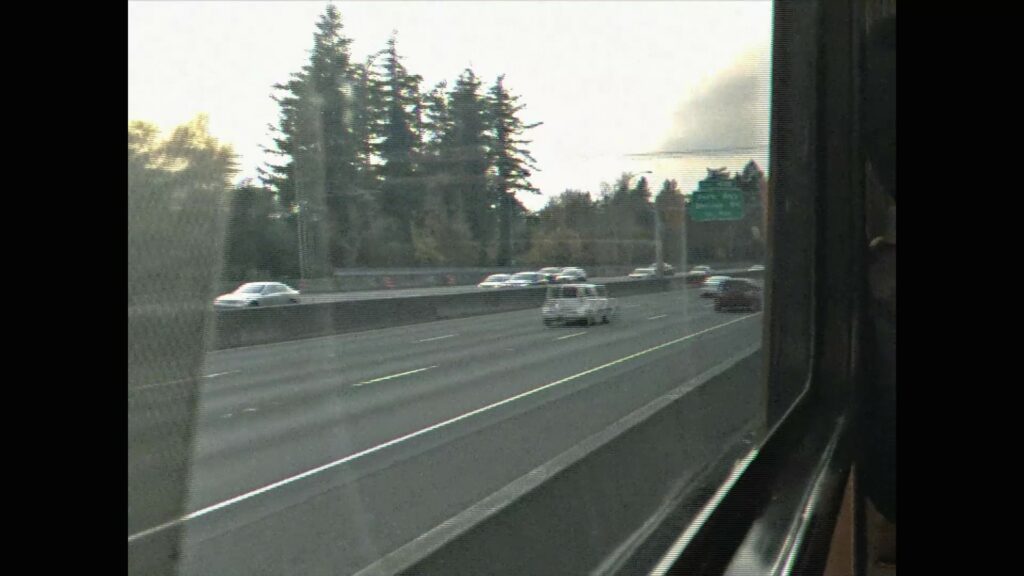 In this guide, we’re using After Effects to turn modern footage into Super 8 style footage and VHS style footage. These two vintage styles look great and can be accomplished pretty easily with the features in After Effects. Today we’ll be using color grading, pre-compositions, creating chromatic aberration, and adding film grain. Let’s get into it!

The first look we’re going to achieve is a vintage film look similar to a Super 8 camera. First of all, we’re going to need that signature 4:3 aspect ratio. We can work with a 1440×1080 composition for this. While we’re here, set the frame rate to 18, because this is what Super 8 films had. This is going to be a bit choppy, but it will look authentic. If you don’t want to apply this to your entire project, you can also use the Posterize Time effect to set an adjustment layer or a video layer to 18 frames per second.

Now drop in your main footage and arrange it in this cropped view so that you can still see everything you need to see. 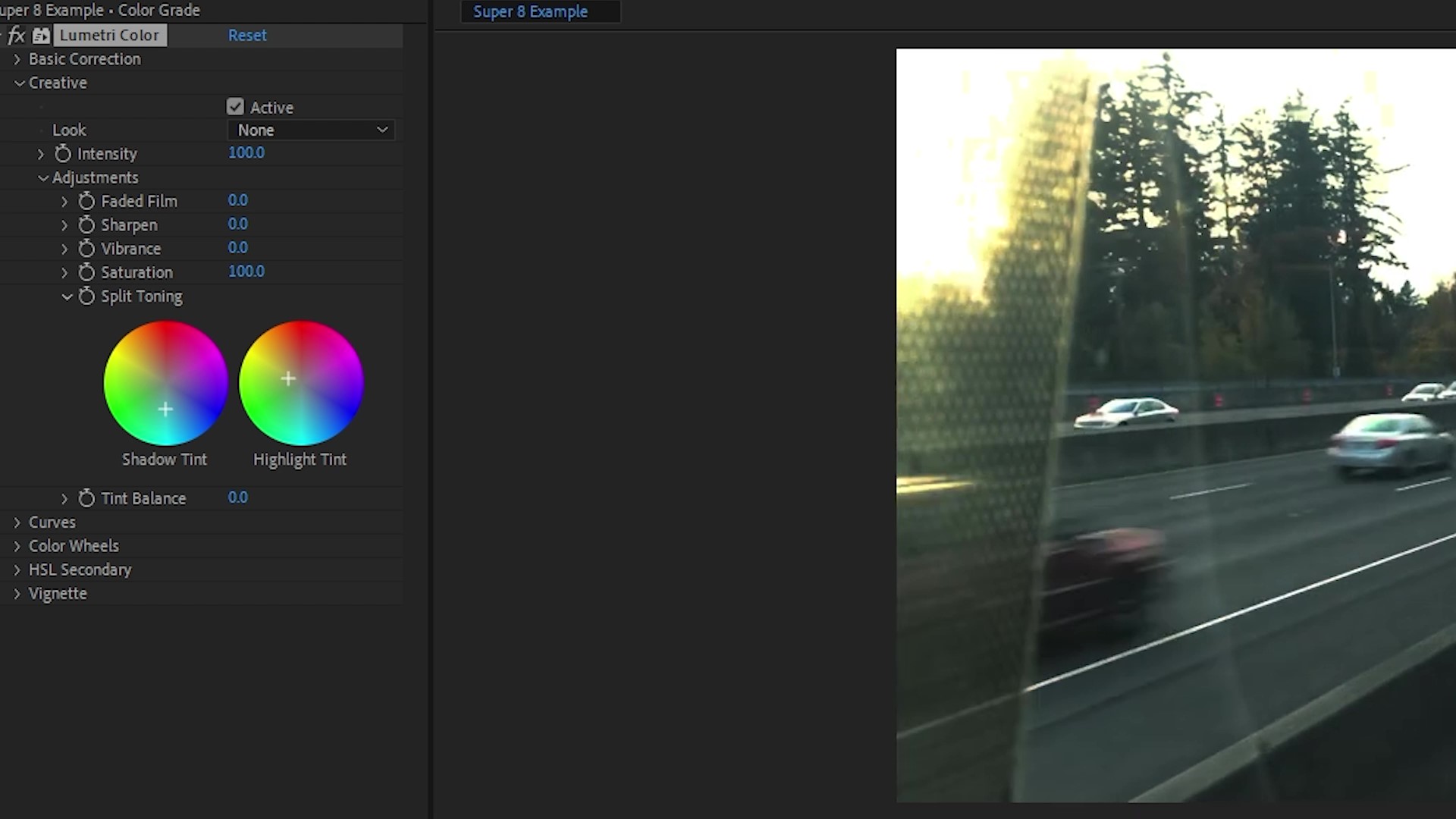 We’ll start with our color grade. Search for and add Lumetri Color to your clip. Super 8 film had a very flat look, so we’re going to recreate that feel. In the Basic Correction tab, push down highlights quite a bit and slightly lower shadows.

Now moving into the Creative tab, we’re going to emulate the blue-green shadows and yellow-range highlights that Super 8 was known for. Don’t go too intense here, but find a place that looks good on your footage. If the color grade isn’t quite looking right to you, there are a number of vintage Kodak and Fuji LUTs that come with After Effects. These might not technically be LUTs inspired by 8mm footage, but they will approximate the vintage look pretty well.

The next effect we’ll add is film grain. Search the Effects & Presets panel for Add Grain, and drag that onto your clip. There are a variety of camera types to choose from, but you’ll have good results no matter which one you prefer to use. You may need to adjust the intensity of the grain, but all of the other settings should be fine at their defaults.

The last effect to add on is blur. Super 8 film has a soft look to it, and modern digital cameras are far too sharp and crisp. Drag Gaussian Blur onto the layer and set it to between 2 and 10. This is really going to depend on the footage, so play around with what looks best.

Now unfortunately, there is no good way to easily create the iconic Super 8 film mattes and flares that surround actual Super 8 footage. There are some great pre-made assets you can find online for free. Today I’m using a pack that I found on The Creative Herd called Super 8mm Overlay Assets. Just drop on the overlay above everything else. For burns or other effects, you may need to change the blending mode, probably to Screen.

If you’d like to make your own simple frame, you can do that too. Create a black solid layer. Then above that, create a black rectangle. Now we’re going to dive into the transform settings for that rectangle and make the edges round. Somewhere between 100 and 200 should be good. Now change the Track Matte mode of the black solid to Alpha Inverted, and you should get a nice rounded frame that looks reminiscent of old film.

And there is your Super 8 film look. Once you’re done you’ll probably want to play around with the color and contrast until it looks sufficiently old.

Next we’re going to go a little bit more modern, but still vintage, and recreate a VHS film look. This was still the era of 4:3 aspect ratio, so when making your composition, make sure to set it to something like 1440×1080.

Drop in your main footage. One of the most noticeable things about VHS footage is that objects are both a bit blurry but also have sharp edges, so we’re going to add some blur and sharpen effects. Let’s start by creating an adjustment layer for these effects. The first effect is Fast Box Blur. We used Gaussian Blur on the Super 8 example to get a nice smooth blur, we don’t necessarily want a smooth blur for our VHS look. Keep the radius pretty low, you won’t need a very high setting here. You want to get a little bit of blur but still be able to see what’s happening in your footage. Next up we’ll be adding the Unsharp Mask effect. This is going to do exactly what we need by creating a sharp edge around individual objects. Push the amount up to around 100, then adjust the radius until it looks good. Somewhere between 10 and 50 will probably look best. 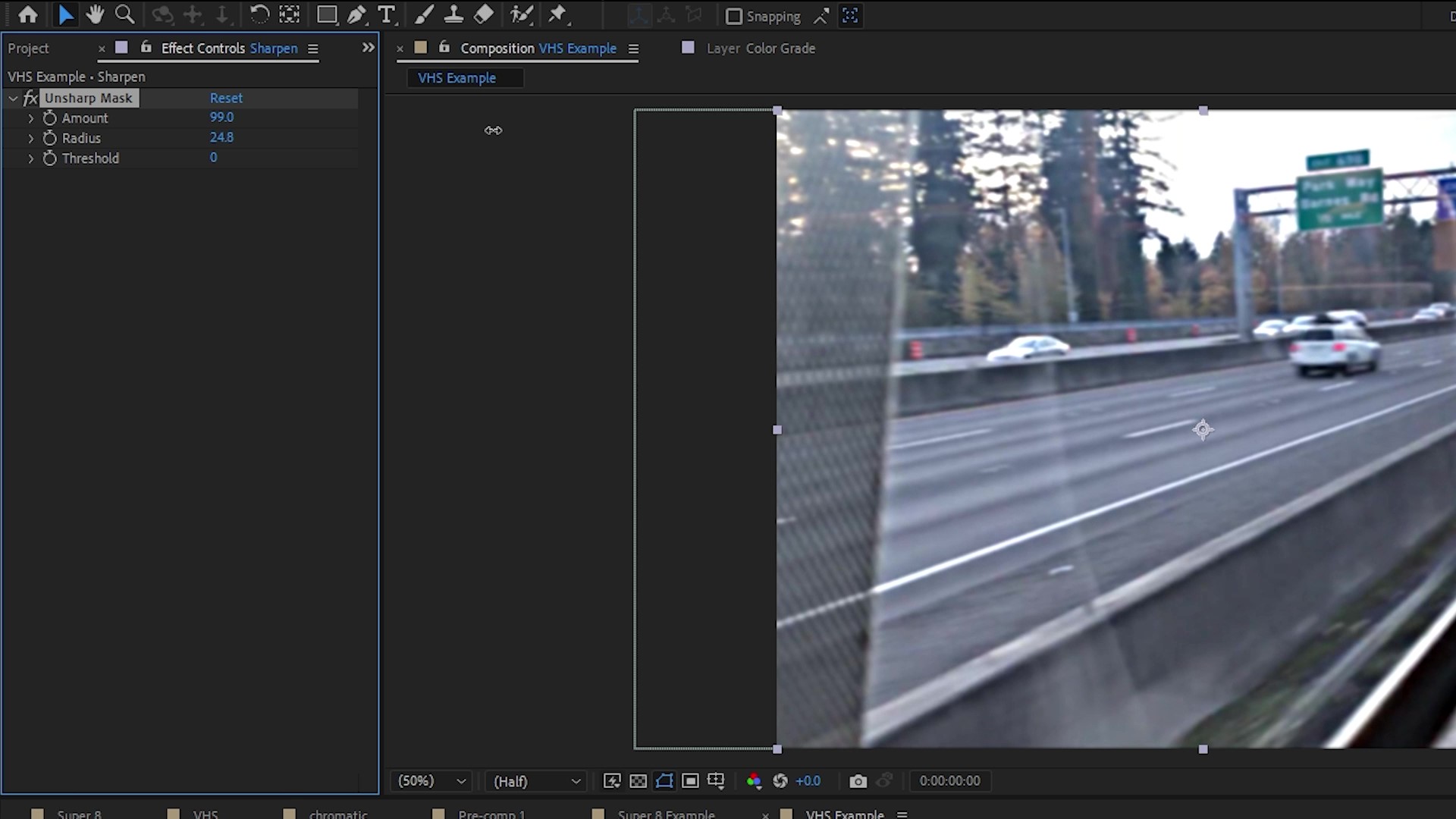 Another key to the VHS look is chromatic aberration, but for the best look you won’t want to apply it to everything. We’re going to borrow a lesson from our Glitch Effects tutorial, and separate the video into its three RGB channels. Duplicate the video layer three times, above the original layer. Apply the Set Channels effect to one of them. Set it so that green and blue are off and only red is on. Apply this effect to the other two layers, but set one to green and one to blue. Then set the blend mode for all three layers to Add and precompose them. Now we’re going to make another duplicate of your original footage and apply the effect Find Edges to it, then invert Find Edges so that the edges are white. Move the Find Edges layer above chromatic aberration pre-composition, then set the Track Matte of the pre-comp to Luma Matte.

To make the chromatic aberration visible, open up the pre-composition for it and nudge each of the layers to the left or right by a few pixels, until you can see all three colors.

To really sell the VHS look, we need to add interlacing. For those who don’t know, interlacing was how video was displayed, by alternating on and off between horizontal bars on the TV screen. This is why paused VHS footage is going to have noticeable lines.

First, make a duplicate layer of your base footage, then pre-compose it. This is going to be our interlacing pre-comp. We’re next going to add the Venetian Blinds transition to our pre-comp. Hide the original layer in order to see these bars. Set the transition completion to 50%, and you’ll see that we have a set of vertical bars. Set it to 90 degrees and we have something that’s looking pretty close to interlacing. You’ll want to adjust the width way down though. Somewhere around 5 should look good. Now move the Interlace pre-comp to the top layer. Nudge the interlace pre-comp one frame to the left so that it’s one frame off at all times, then make sure your project is set to 30 frames per second.

Finally we can mess with color. Create a new adjustment layer on top of everything and apply Lumetri color to it. VHS footage was quite flat, so lower the highlights and raise the shadows slightly. Next, open the Creative tab and slightly pull down the vibrance to create a less saturated look. Add a little dash of blue-green to the shadows. Finally, apply the Add Grain effect and pick a small amount of grain that looks good. VHS shouldn’t have as much grain as Super 8 film, but should still have some.

Now you should have a pretty convincing-looking VHS effect. You may need to adjust the contrast and color further, so look up references of actual VHS footage if you see a look you want to imitate.

Thanks for reading or watching this FilterGrade video. If you want to see any more After Effects tutorials or vintage film look tutorials, let us know down in the comments below!

Related: How to Create a Retro Grainy Film Effect in Photoshop