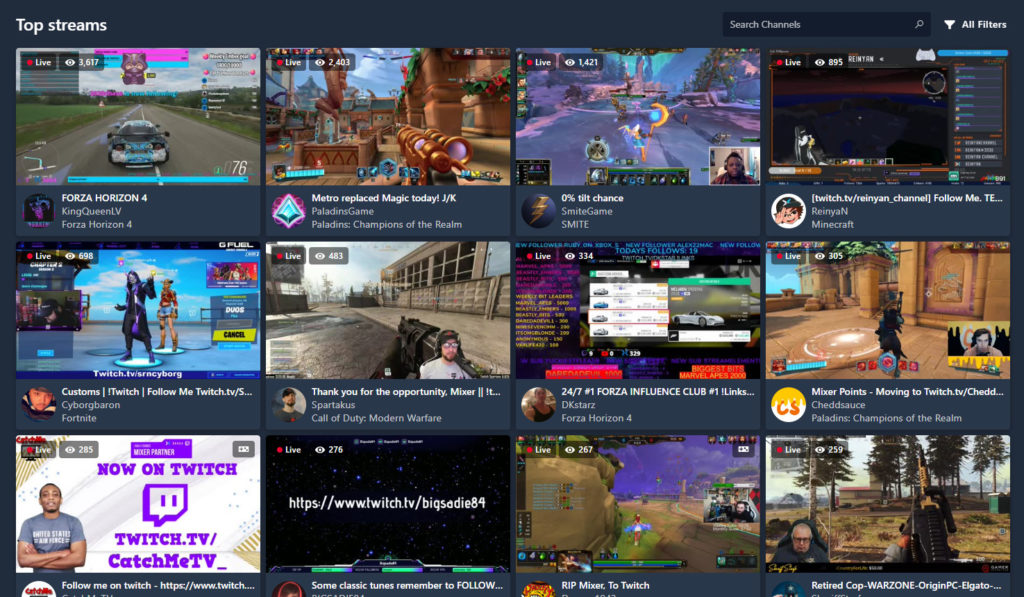 Microsoft’s live streaming service Mixer launched to a fair bit of disinterest, with Twitch and YouTube dominating the live streaming scene, especially for gaming. That all changed when they signed a massive exclusivity contract with Tyler “Ninja” Blevins, the biggest Twitch streamer at the time. But now, Mixer is shutting down. The internet collectively decided that Mixer was a failure, and now its streamers are left wondering what to do next.

In this article, we’ll cover what we know about Mixer’s shutdown at this point, as well as how aspiring streamers can restart themselves on other platforms.

Related: The Top 10 Highest Paid Streamers in the World

Mixer’s demise isn’t surprising to anyone, but the timing is. This decision came seemingly out of nowhere, with software updates and business decisions coming through the pipeline in the week prior.

Mixer announced their shutdown while many streamers were live, leaving them to cope with the news as viewers in their chat shared it with them.

Microsoft isn’t just leaving their streamers with nothing, though. The compensation is that they are moving users to Facebook Gaming and partnered streamers will remain partnered as they move to Facebook.

The Impact of Mixer

While Mixer was doomed from the start with both Twitch and YouTube dominating livestreaming, it made its mark on the scene. It proved to the world that streamers can be worth millions of dollars to these companies. The contract with Ninja wowed people in and out of the gaming sphere. It didn’t matter that Ninja was never able to bring in the same audience on Mixer as he did on Twitch, because it opened the doors for other streamers to receive exclusivity contracts from platforms like Mixer. With actual competition against Twitch, companies were more willing than ever to spend money on their biggest entertainers.

After all of the news about these deals, the streaming world has changed – it is now more like national sports organizations.

With Mixer being shut down, Microsoft is funneling its users over to Facebook Gaming. The platform has received some traction, but has all of the negative connotations that Facebook brings with it.

This means that many Mixer streamers are looking at Twitch and other services rather than moving over to Facebook. Mixer’s biggest faces, Ninja and Shroud, are still deciding where to move to, but seeing them return to Twitch would not be surprising. However, many streamers are stuck between a rock and a hard place. Facebook has a bevy of privacy issues including a lack of user anonymity that Mixer and Twitch provide, and Twitch has a history of inaction against sexism, racism, and sexual harassment. This makes the decision extremely difficult for many streamers.

The Community Has Been Supportive

Streamers and creators have been nothing but supportive to smaller Mixer streamers since the shutdown was announced. Twitter users have created threads asking for Mixer streamers to drop their new Twitch, Facebook, or YouTube links. Ninja and his wife Jessica Blevins spent their last hours on Mixer supporting fellow streamers on the platform.

Myself and @Ninja spent a few hours tonight showing love and support to Mixer streamers and will continue to! We love you guys.

Others have created a new tool that exports all of one’s Mixer followers so they can keep their community in some way. This tool, Goodbye Mixer, is sure to help creators who are wondering what to do next.

How to Get Started with Streaming

If you’re looking to start your livestreaming career, we’ve compiled some quick steps to get started with Twitch, YouTube, and Facebook Gaming.

And while this video is primarily aimed at setting up your Twitch stream, it applies to any streaming service, so check this out if you want to get into the nitty-gritty of setting up your stream elements using OBS.

How to Get Started on Twitch

Read next: Fast Guide to Streaming on Twitch