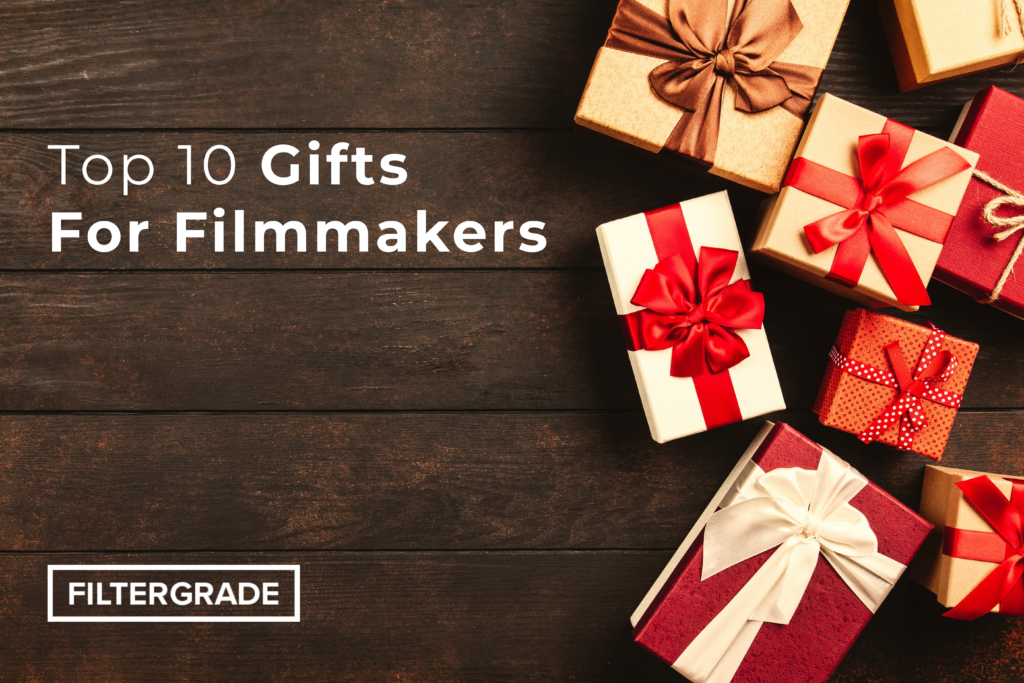 I have an uncle-in-law who is an avid golfer. When my wife and I think of gifts for him, our impulse is to go for some sort of golf equipment. But we know absolutely nothing about golf. And if we did get him something for golfing it would probably be something lower-quality than what he wants or something he already has. When it comes to gifts for filmmakers, you can use the same thought process. The ideal gifts for filmmakers probably have nothing to do with filmmaking at all. But if you must get something thematic, then we’ve assembled a great list of the top 10 gifts for filmmakers!

While a filmmaker might have a great collection of books from famous directors, a great gift is a coffee table book for one of their favorite films. These books are usually large hardcover books full of concept art and behind-the-scenes photos from films. This would make a great addition to the collection of a filmmaker in your life, along with their wall of movie posters (let’s be honest, they probably have one of those!).

If your filmmaker is still relatively new to the craft and could use some more education, consider signing them up for courses on Masterclass. There are some fantastic courses from famous directors, such as David Lynch Teaches Creativity and Filmmaking and Aaron Sorkin Teaches Screenwriting. Masterclass starts at $15/month so is a relatively affordable gift.

Sure, it’s kind of cheesy, and might remind you of your dad’s lame fishing shirts, but there are some great witty movie-making shirts available. For example, check out this Fix It On Set shirt. It’s a funny joke about filmmaking, referencing the “Fix it in post” joke (the joke is about fixing all filmmaking mistakes in editing rather than doing it right on set).

Filmmakers always need more storage, whether its for their computer or their cameras. There are various storage devices to pick from and it depends on the use. SD cards for cameras are good for photographers and amateur filmmakers. Fast cards no smaller than 64GB will probably be appreciated! An external SSD of 1TB or 2TB can be handy for carrying around some footage or a draft of a film. Some cameras like ones made by BlackMagic use 2.5-inch SSD drives, so large-capacity drives could make good gifts for a BlackMagic user. While the filmmaker in your life probably has a ton of storage already, no one would turn down more!

Not enough filmmakers have this handy tool! A color chart is a simple tool that has various colors and grey tones used to get accurate color and white balance while filming and editing. Color is huge in post-production, and a gift like this can be incredibly valuable for the filmmaker in your life. The X-Rite ColorChecker is probably the most popular consumer option, and a great choice when finding gifts for the filmmakers in your life.

Some filmmakers are insanely organized. Some throw all of their gear into the back of their car’s trunk and call it good. If you know a filmmaker who lands in the second category, consider buying them a camera bag. For the most part, it doesn’t matter what camera someone has. Some of their gear will fit in a camera bag! Look for one that is weatherproof, has shoulder straps, and has divided sections on the inside (preferably adjustable ones!). This makes transportation so much easier and helps protect expensive film gear.

Gaff tape will be simultaneously a funny gift and a great gift. It is used frequently on set to tape down wires or mark areas on set, and it’s used because it doesn’t leave a residue. Giving this gift is sort of like buying someone duct tape a gift. It’s not the most exciting thing in the world, but you can guarantee it will get used.

If you know a camera user who is running around using onboard audio, or a less-than-optimal audio solution for their filming, then camera-mounted microphones make great gifts for filmmakers. There are many options out there, but Rode is the go-to brand for this kind of hardware. Having a camera-mounted microphone means that a filmmaker can capture higher-quality audio directly with their camera. This won’t always be ideal for a production with a full set. But it may help when filming documentaries, single-camera productions, events, or lower-budget productions.

If you really don’t know what else to get a filmmaker, you can always get a gift card! While an Amazon gift card is always a safe bet, there are a few websites that are more specific to filmmaking. Consider purchasing a gift card from Adorama or B&H Photo.

Bonus: What NOT to Get a Filmmaker