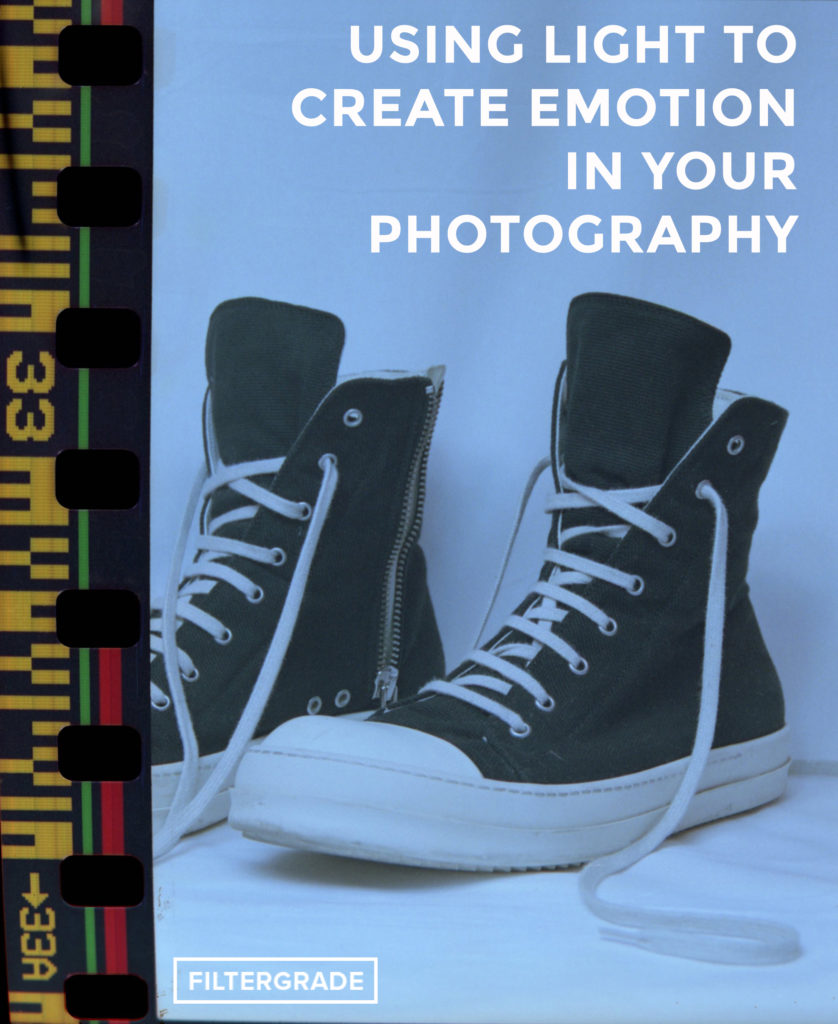 Shooting film for a project, for work, or really for any matter where you need accurate photos is tough if you don’t have tons of experience. You won’t be able to see your mistakes right away if you are making any and once you realize that the lighting was off or your settings weren’t perfect, it’s far too late.

Learning what your camera will produce will help you to learn what steps you need to take in order to get the shot you’re looking for.

Today we’re going to be looking at the many variables to take into account while shooting film photography in a studio. For some, lighting may be an issue, whereas for others, they may have the right light, but not the correct camera settings.

To help you better understand camera settings and lighting, we’re going to be shooting some Fuji Superia 400 and Kodak Ektar 100 still life photos. With variations in F/Stop, shutter speed, ISO, and lighting, we’ll be showing you what settings will produce what effects.

Camera settings will vary between photographers depending on how someone wants to capture an image, depending on their personal style, and even the environment around them. Regardless of who you are or what you are shooting though, there are no limitations to playing with camera settings to effect the image you’re going to capture.

No matter what you are shooting, there are many different ways you can capture it. Whether you’re going for a dark, moody look or a bright, airy feel, this will all depend on your camera settings, especially while shooting with film.

Altaring the ISO/ASA is a simple way to adjust the light settings within your camera. A general rule of thumb to know is that the higher the ISO is, the more sensitive your camera will be to light. 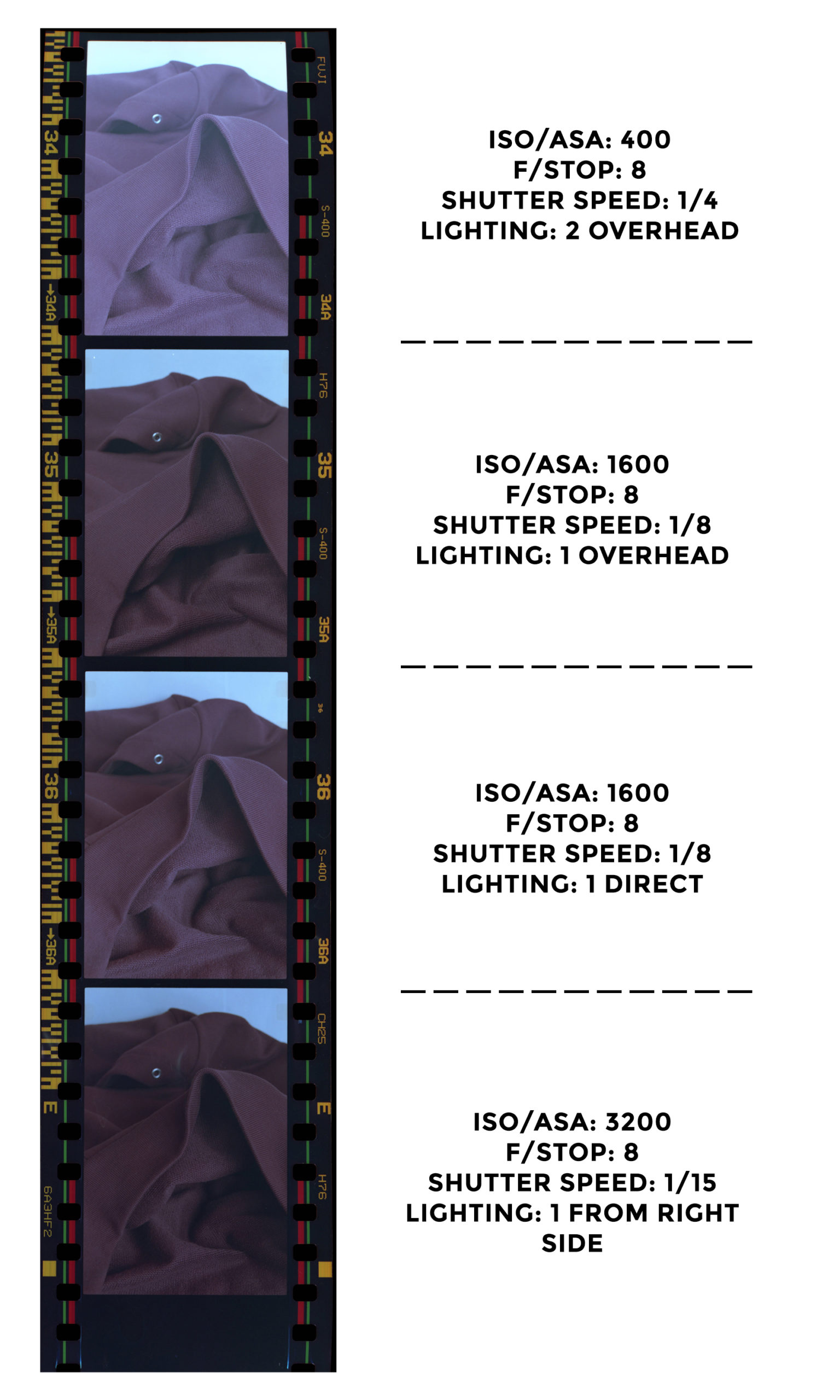 While adjusting the ISO, we were able to take a look at the different visual effects this has on the image. For example, in the image above, you can see that how ISO was able to affect the images.

Most film cameras will have a light meter so selecting your shutter speed is usually not too hard, but if you don’t want to shoot based off your light sensor’s reading then knowing how the shutter speed works is critical.

Simply put, the shutter speed dictates how fast or slow your shutter will be open and letting light in for.

For example, if your shutter speed is 1/1000 that means your shutter will only be open and exposing the film to light for a 1/1000 fraction of a second (very fast). However, if you are shooting at 1/15 then your shutter will be open much longer, allowing more light to be exposed to the film.

Let’s take a look an example of this. Below you can see how a slower shutter speed will allow for a darker image. While shooting in bright lights, use this to your advantage to allow more or less light.

Now, why does this matter?

The shutter speed is important to know when shooting because it will precept whether or not your photo will come out visible, or if it will be too dark/too bright. If you are shooting in dim light and you only have the shutter open for 1/1000 second your photo may come out too dark because not enough light was let in to the shutter. The same thing if you are shooting in bright light and you have your shutter open for too long – you may find that your photos are over-exposed or too bright.

Aperture is another setting you need to be thinking about before you take your shot. The f-stop plays a role in focusing your image. Many lenses range from f/1.8 to f/22 with variations on each end. Lenses that have an f-stop of 1.8 are used for capturing a small focus point with intense clarity. At f/1.8 your lens will be very widely opened and allowing a lot of light in. At  f/22 your lens will be minimally opened only allowing a small amount of light in, but the whole image will be in focus rather than just one point.

To analyze aperture, we conducted a study using multiple objects in the next set of frames.

As you can see, the general focus in the images decreases as you decrease the f/stop (lower the aperture, less the whole image is in focus). This is why the sweatshirt and the lamp are fully blurred in the photo on the right (shot @ 3.5), whereas on the left most photo you are able to see more of the sweatshirt and lamp, although still not in 100% focus.

When shooting, photographers utilize the aperture for different styles of shooting. For example, portrait photographers tend to be shoot in f/1.4-f/2.8 to capture a highly detailed subject with a heavily blurred background to draw your focus into the main object.

On the other end of the spectrum, astrology photographers tend to shoot in f/18-f/22 in order to have full, crisp images. Learning how to distinguish what you want to be in focus and what you don’t will take time, but utilizing this as a creative tool can be a great benefit once you perfect your photography.

Here’s what I like to call the ‘x-factor.’ Lighting is the x-factor because it can easily make or break your shot. Camera settings can be played with and there are many different options, but if you don’t have enough light, or you have too much light then you’re going to have a tough time getting the perfect shots.

To show you some examples of studio lighting, let’s take a look at some photos using a variety of setups using the Cowboystudio Full Spectrum studio lights. These lights are really durable, super bright and they’re relatively inexpensive if you are just looking to learn about lighting. Below we are able to observe how light can play a role in how your photo will turn out. For example, the photo on the left (frame 31) is using two studio lights to a lit scene overall; however, the two frames right of that are only using one light. See the differences in light below.

Although not a vast difference, you can still examine what your subject will look like with a direct light and with an overhead light.

Check out the test shots below to see some examples of how the variation in light setup can have a large effect on how the image turns out and what the image is actually saying.

Using this example, we are able to see the relationship correlation between ISO/Aperture/Shutter Speed. By playing with these settings you are able to produce a variety of images.

Now that you have examined a few studies of light, rather than thinking about the difference in shadows, highlights, and colors, push yourself to think about how each story is told differently because of the way the lights are set up.

We hope that this study of light has helped you to learn how lighting and camera settings can affect your final product. For more on photo lighting and analog photography, check out these articles as well: