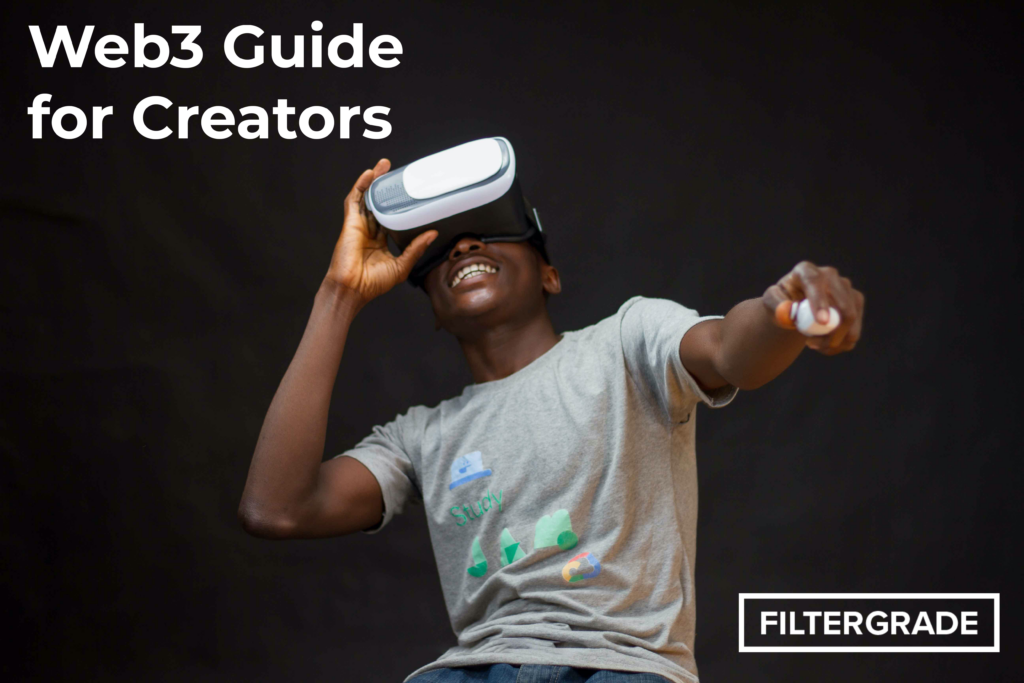 You may have heard about Web3 recently. It’s a hot topic among those interesting in Cryptocurrency, Blockchain, and similar concepts. With NFTs seeming to be a wild craze in 2022, Web3 surely will have some impact on creators and artists. In this article, we will explain what Web3 is, what it’s trying to accomplish, and what specifically it means for creators.

The Current Status of Web3

You can breathe a sigh of relief at the fact that you don’t have to worry about Web3 quite yet. Currently, it doesn’t exist. Web3 is named after Web1 and Web2, which refer to stages of the internet. Web1 was the era of static webpages, while Web2 is our current era dominated by dynamic and user-created content. Web3 takes the spirit of Web2 a step further. It seeks to democratize content and shift the power away from “Big Tech” like Google and Meta, and into the hands of the common user.

In order to shift to Web3, proponents suggest using the blockchain. This would ensure that content is harder to copy and steal, as there would be a public record of who owns the content thanks to blockchain technology. Those who are in favor of Web3 claim that it will be decentralized and harvest less personal data than the current internet. Meanwhile, critics argue that the centralization will only shift to different companies instead, and actually pose a larger risk to data due to the fact that Web3 would have less regulation. So, there is still a lot of debate about whether Web3 is good or not. Ultimately, the vision for it is still a bit fuzzy, even coming from its strongest supporters.

You may see the term Web 3.0 floating around, as some people are using this to describe the concept. However, there is an existing concept called Web 3.0, also called the Semantic Web. This is a project that aims to make internet data more machine-readable and does not require the blockchain. So, it is distinctly different than Web3, but does hold enough similarities that it often gets confused.

The Future for Web3

Web3 may have a future. Investors are excited about its potential. They have already put millions of dollars into companies trying to make Web3 a reality. Andreeson Horowitz is one of the biggest names investing in it. However, the companies working on Web3 are highly focused on activities that favor cryptocurrency and cryptocurrency trading. This is great for anyone interested in those activities. But for those who aren’t, Web3 does not provide much value now, or seemingly in the near future.

There is also a large public backlash to Web3. Investors seem excited, but the general public does not feel the same. Plenty of major tech companies such as Discord and Square Enix have attempted to make NFTs, but have backed down after overwhelming public outrage. The public has slammed these companies. People generally see NFTs and other crypto activities as scams and easy money-making schemes for the businesses that create and sell them. With so much public backlash over Web3 concepts, is there any hope for companies to push for Web3? And if they do, will there be enough engaged users to make it worth the investment?

Take it with a grain of salt, as these leaders are part of the “Big Tech” that Web3 claims to take power from, but tech leader Jack Dorsey (Twitter) and Elon Musk (Tesla, SpaceX) have publicly decried Web3. These tech leaders have denounced Web3 as just a buzzword and a scam. Jack Dorsey has argued that the power in Web3 will be in the hands of investors and venture capitalists, and not the common people, as promised. And for now, it is just a buzzword and may need more time to be developed. In the future, Web3 may hold more potential, but it is still too early to know for sure as it is only used on a small scale.

NFTs (non-fungible tokens) have unlocked a new way for artists to make money off of their work. We have a whole breakdown of the NFT art situation, so be sure to read that as a primer if you don’t know much about NFTs.

The technology that the blockchain and NFTs offer is the ability for artists to sell their work digitally with additional benefits. Artists can create limited runs of their art, and each piece will be digitally verifiable with the blockchain as being original. Yes, of course you can always right-click and save-as on an image, much in the same way that you can print out a piece of traditional art and put it on your wall. Having an original of a piece of art is a special feeling that invokes exclusivity. Before the blockchain, having a unique piece of art in a digital form didn’t make much sense. Now, those unique art pieces can be unique, even if someone makes a million copies – none of them will actually be the original.

Additionally, artists can program royalties into their art. Since NFTs are frequently bought and sold for higher amounts, this can be incredibly valuable. Essentially artists will get a certain percentage of the money from each sale. This turns what is normally a one-time transaction (selling an art piece) into a recurring source of income.

Web3 will continue the current trend of NFTs. Artists will have even more opportunities to create and sell their art. In addition to the current way we understand art, the advent of virtual spaces such as the Metaverse could result in a higher demand for unique digital products. NFTs will certainly be an important part of these digital spaces. Users will want to show off the cool collectibles they’ve acquired, in the same way that people love showing off their prized possessions in real life. There could be a demand for custom avatars, worlds, and other in-universe items.

However, NFTs are a controversial topic. They are being treated less as works of art and more as investment opportunities. Investors are buying art that most of the general public sees as low-effort. Other times, the artwork is even stolen and sold as an NFT with no verification of ownership. Proof of ownership will theoretically result in less stolen content. But it is still a major issue that Web3’s proponents have failed to solve.

This all begs the question of whether people actually care about supporting artists, or if the recent NFT craze is a passing trend. Web3 has the potential to empower creators to make more money off of their art. But it will only last into the long term if the general public adopts NFT art and if NFT collectors care about art rather than just investments.

DAOs, or decentralized autonomous organizations are another key to creators succeeding in Web3. At its core, a DAO is an entity with no central leadership, and is thus governed by the community. All decisions that this group makes are democratically determined. In regards to creators, this may manifest in the form of a freelancer network where contactors can pool portions of their earnings to pay for software subscriptions. DAOs use smart contracts to enforce and automatically trigger certain actions. Another example is developers entering a DAO to work on tasks involving open-source projects and then getting paid for the work that they do.

When it comes to influencers and creators that have an audience, a DAO can be an excellent way to replace a pledge platform like Patreon. Access to this exclusive group can be granted through a token (like an NFT) from the creator. This token ownership will turn a fan into a stakeholder. The creator can provide all of the benefits they currently do through pledge platforms, but keep more of the money. They also won’t be at the whims of the tech company that controls the platform.

However, the benefit under this platform becomes selling the access token when its price goes. This makes DAOs of this type suffer from the same issue as NFT art – will people purchase them because they appreciate and want to support art, or because they are making a financial investment?

This type of decentralized organization holds some advantage to creators who want to be in control of as much as possible. There is no need to trust a third-party service or manager. Instead, the group can make decisions as a unit and rely on the contract and code.

While freelancers and creators can benefit from DAOs, its primary uses can be seen in terms of investing. With a DAO, a group of people can all invest evenly and share the risk and profit without fear of a principle with disproportionate power acting in ways that the group doesn’t approve of.

The early iteration of the DAO resulted in a bug that let a hacker steal $60 million worth of Eterium from the collective. While current DAO systems are different than this original, problematic one, it is still a cause for concern. Especially when smart contracts are involved. What makes smart contracts great is that they are difficult to alter. This also makes it so that it’s difficult to patch broken code!

Will Web3 Take Off?

Many are convinced that Web3 will be the next evolution of the internet, while others argue that it isn’t truly an evolution or will inherently not work. Regardless of its longevity, NFTs and DAOs show that the vision fo Web3 can happen on a small scale, if nothing else.

There are two main roadblocks to the goals of Web3: