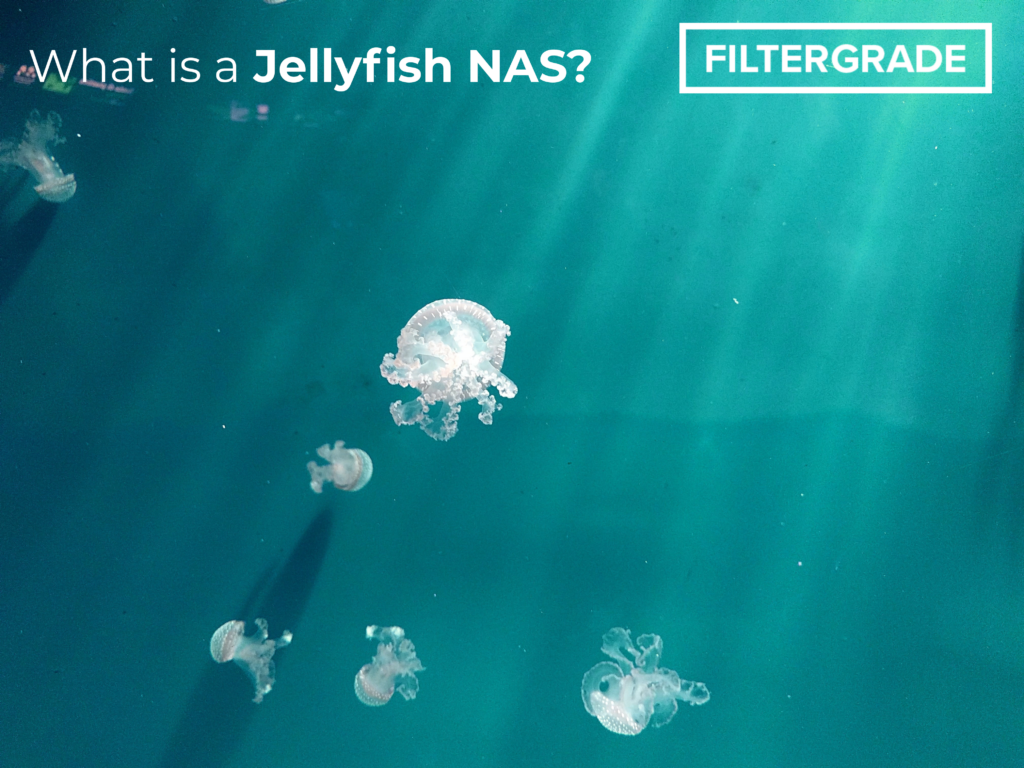 What is a NAS?

If you already know what a NAS is, feel free to move on to the next section. If you’re new to storage solutions, don’t skip this! Network-attached storage solutions combine aspects of local storage and cloud storage to create something convenient, expandable, and relatively easy to use. NAS systems are often on-site machines, meaning that they are located within your office or house.

The difference between them and any other external hard drive is that they are not physically attached to the computer you’re using. This is where the cloud aspect comes into play. A NAS system connects to your internet network and is accessible by other devices on that network. You can store and access files just like any other storage drive. While the technology is different, the implementation is very user-friendly, as it mostly acts like a regular storage drive when set up properly.

Also as opposed to other hard drives that may be in your computer, NAS systems tend to have many, many terabytes of storage for keeping large files safe for a long period of time. They also use special software to leverage those drives for more speed and reliability.

And of course, the main advantage of a NAS is that multiple devices can access it at once and everything is stored in a central location.

What is the Jellyfish NAS?

The Jellyfish is a video-centric NAS created by LumaForge. The downside of many NAS solutions is that they’re not made for frequently accessing files at high speeds. They tend to be backup servers. But when it comes to video editing, production teams need something with speed in addition to reliability. That is where the power of the Jellyfish comes in.

LumaForge claims that their solution is fast enough that editors can even work with 8K footage without any performance loss. They accomplish this through a set of impressive specs. The base model is a single-CPU system with 128GB of RAM, up to a 10GbE ethernet connection, and a read speed of 3200MB/s. By comparison, a normal spinning hard drive can read at around 100MB/s or so and a Gen3 NVME solid-state drive can read around 2000MB/s or so. This means you shouldn’t have any performance issues when playing back large files from the NAS, even when multiple editors are using it.

What Makes the Jellyfish Fast?

The Jellyfish uses regular spinning hard drives (although of a higher reliability and longevity than the ones in most home computers), which should mean their speed is limited to around 100MB/s, right? That would be the case in a normal PC, but the Jellyfish utilizes powerful storage technologies to get more speed out of these slower drives and accelerate read speeds to 3200MB/s for the base model and up to 4600MB/s for the higher-end models. The products available for purchase can ship with up to 240TB of raw storage, and that is split up across many individual drives. Through the software configuration, data is spread across multiple drives, resulting in a combined speed that is much higher.

Think of it this way – if you had to carry a 400-pound container somewhere, it might take you a long time because it’s so heavy. But if you could get a few friends to help and each carry 50 pounds, you’ll all be able to transport it much faster. That’s what the Jellyfish (and other multi-drive NAS solutions) does with its drives. It uses a technology called RAID, which leverages the power of multiple drives to make an overall faster system, as well as to duplicate data. In a system with RAID applied, multiple drives can fail without you losing any data thanks to how the system duplicates files and spreads them across the drives. This also lets the end user see the full storage amount rather than seeing dozens of smaller individual drives.

Do You Need to Be an IT Expert to Use a Jellyfish?

The nice thing about the LumaForge Jellyfish as well as NAS solutions from brands like Synology is that the hard parts are out of the user’s hands. For the most part, Jellyfish users don’t need any more tech experience than they already have if they’re using a computer to store and access files.

You can always make your own server and set it up yourself, but not every production team has an IT expert capable of doing that. If you’re a group of editors that needs a solution that’s completely ready to go and easy to use, the Jellyfish just might be the NAS for you.

If the Jellyfish was just an easy-to-use storage server, we wouldn’t be writing about it. What makes it great is that it was designed by video editors, for video editors. It has built-in software that is made to aid with the production process.

First is Kyno, which is software that lets you filter through your media library using metadata, custom tags, and ratings. Best of all, it integrates directly with major editing software so files you’ve already tagged will have their metadata imported.

Jellyfish Media Engine can create proxies of all of your footage, making editing speeds even faster. The great part about this is that the transcoding process can be offloaded to the powerful hardware of the Jellyfish, rather than bogging down an editing machine. It’s also great for when an editor needs to work remotely. They can access the web version of Media Engine and generate proxies, without having to worry about limited internet speeds for transcoding.

Additionally, the Jellyfish software is compatible with Windows, Mac, and Linux, as well as all major video, effects, and sound editing programs.

What Hardware is in the Jellyfish?

LumaForge has aimed the Jellyfish at people who are not particularly knowledgable about servers. And that is made even more clear by the lack of technical details on their website. After some digging, I was able to find an article on Mixing Light from 2018 with an overview of the Jellyfish.

For those who are technically inclined, read on.

At least at the time of writing of the article on Mixing Light, the Jellyfish Mobile shipped with an 8-core / 16-thread Intel Xeon E52620 v4 CPU. This launched for around $400 and can be found for less than that these days. Considering this was as of 2018, it’s possible a different CPU is used now. Like mentioned before, the Jellyfish Mobile comes with up to 128GB of RAM. This would set you back around $700, depending on brand and type.

Through some sleuthing, a user by the name of usul on the Level1Techs forum has determined that the storage drives are HGST drives. HGST has various enterprise-grade drives, but a 32TB configuration should cost less than $1000 to acquire yourself. The motherboard could be any compatible server motherboard, but it appears to be a product from ASRock Rack, specifically the EPC612D4U-2T8R. It’s unclear how much this cost on release, but it appears that similar motherboards go for between $500-$1000 on eBay.

The case is a modified Lian Li PC-M25. This case has 5 drive bays, making it great for a small server. The product is discontinued but retailed for $169 at release. Finding a case with that many drive bays is more difficult but not impossible today.

The power supply appears to be an off-the-shelf power supply that could be had for around $100 depending on the features you go for. This can vary a fair bit.

Lastly, the Jellyfish has two SSD drives. One is presumably for the operating system and software, and the other is a 1TB cache. This would add a couple hundred dollars or so.

The operating system, CentOS, is also free and open source. Presumably, the OS works very well with the intended use of the Jellyfish. If you ended up building your own, you could install CentOS yourself, or another free NAS operating system such as TrueNAS.

Is the Jellyfish Worth it?

To get the lowest configuration of the Jellyfish, you end up spending around $10,000. That gives you 32TB (23TB usable after RAID is set up) and two 10GbE ports for connectivity. And it only goes up from there. It’s not hard to spend $40,000 on your Jellyfish. Competitors like Synology will end up costing less in many cases.

Custom-made servers can be great and they can cost a lot less than an off-the-shelf or custom solution. The downside is that you need a knowledgeable IT expert to manage the server. The Jellyfish is about as close to “set it and forget it” as you can get. It has a super-quick setup, an interface designed for non-IT people to use, and video-specific apps built in that are guaranteed to work well with the product. Even if it seems like you’re overpaying for what the Jellyfish is, many businesses just want a solution that does the job without causing a headache when things go wrong. Much like a Mac laptop, the tech inside is less important to creatives than how easy the technology is to use for their needs – and people are willing to pay a premium for that ease of use.

The fact that LumaForge offers its products in a portable form is also great. Not every production team has a server rack or a place to deal with a loud server. And sometimes you do need to be on the move. The Jellyfish Mobile may be a compelling enough offer for some people with specific needs.

Earlier we broke down all of the parts in the Jellyfish Mobile. If you went for the $10,000 32TB model, you would end up spending less than $4,000 if you built it yourself. On the surface, buying from LumaForge sounds like an easy way to lose $6000. But it’s a little more complicated than that. That $6000 pays for a server that is:

It’s a little bit like paying for an IT team to do it for you. So if you’re an IT expert already and you like DIY, go ahead and build your own. If the word “server” scares you and you want something off-the-shelf that works well for video production and storage, consider buying a Jellyfish!

Not quite ready to make the jump to something this complicated but still want storage? Check out our article on the best free cloud storage solutions. Or if storing video is something you’re interested in, you can read more about how to manage large video projects.