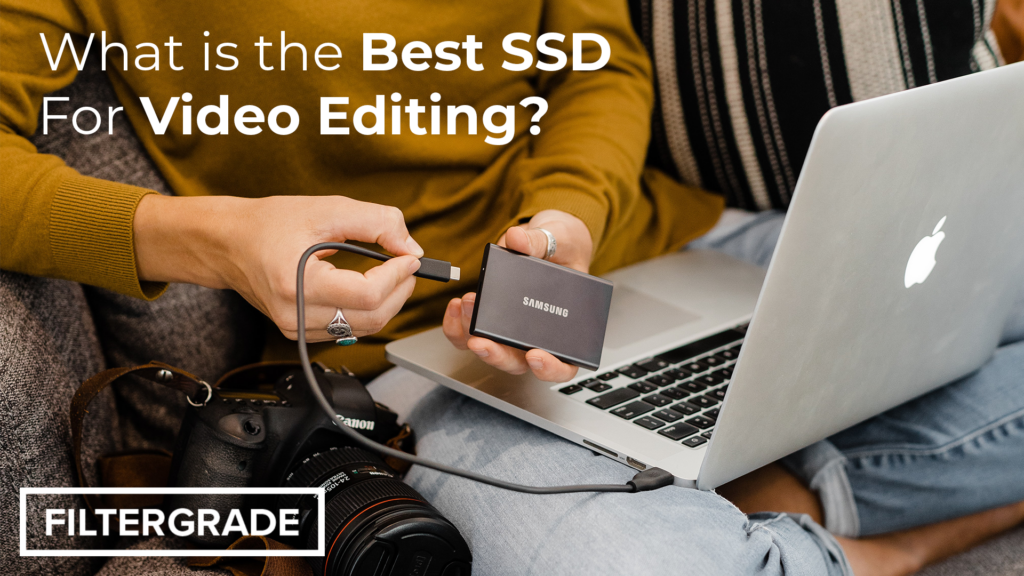 If you’re a video editor, then you want to be able to produce your work as fast as possible and not be limited by your hardware. As the world of fast storage devices evolves, it’s clear that you need an SSD for intense video editing. These super-fast drives can decrease how long it takes to load projects and scrub through timelines. But are they worth the money? And what is the best SSD for video editing?

What is an SSD?

SSD stands for solid-state drive. These large-capacity computer storage devices are faster and more compact than traditional hard drives. They can make your computer start up quickly and open programs faster, without breaking the bank. While they are more expensive than a normal hard drive, it’s not a significant amount, and it can make a big difference. There are so many levels of detail this description can get into, but suffice to say that an SSD is a fast storage device that you should at a minimum have as your boot drive, that your operating system is installed on. Traditional hard drives still work great for mass storage, as well.

Do SSDs help you edit faster?

We said that traditional hard drives work great for mass storage, still. But what about all of your footage that you’re actively editing? SSDs can have data transfer speeds significantly faster (like 10 to 40 times faster depending on the drives you compare), but does this speed matter when you’re working with footage stored on it? At normal playback speeds, you’re unlikely to experience any issues even with 4K videos. In fact, you can probably even play back the footage at 2x or 4x speed just fine.

Here is where an SSD’s higher speeds will come into play:

So, does it affect editing? Kind of. While scrubbing through complex timelines, an SSD may be superior to a hard drive. But most editing tasks such as cutting and applying effects shouldn’t change much. That being said, if you’re a professional editor, you want to save as much time as you can!

How Fast of an SSD Do You Need?

There are some blazing-fast SSDs out there that have theoretical transfer rates of thousands of megabytes per second. And there have been advancements in technology that allow for even faster speeds.

The required read speed for your footage depends on a lot of factors, but it’s unlikely to be more than 1000MB/s, and most SSDs can transfer at higher rates than that. Luckily for consumers, that is a bit of a non-issue. Slower drives are not necessarily less expensive than fast ones, and it’s easy to get a drive capable of 2000+ MB/s for a reasonable price.

Depending on your computer setup, you may be debating between internal and external SSDs. If you have a desktop computer with room for expansion and appropriate connectors, then you should buy an internal SSD. This way you will always have the drive connected and you can utilize its speeds with a direct connection.

If you’re on a laptop, or don’t have any way to add an SSD to your computer, you can purchase an external SSD. These may be slightly more expensive due to the enclosure, but the difference is not a deal-breaker. The drives inside are no different than the options for internal drives. External drives will use a USB 3 or USB-C connector, both of which are plenty fast for video editing but could be a bottleneck for the drive if you’re using a slow port. The main advantage of course is that external drives are portable. There is no wrong answer in terms of performance, and you should pick the option that makes the most sense for your lifestyle.

The Best SSD for Video Editing

Picking the best SSD for video editing depends on a few factors, so we’ve picked a great option for an internal drive and for an external drive.

The Samsung 970 EVO Plus is a tried and true SSD that is beloved by gamers, editors, and average users. It’s fast, reliable, and reasonably priced. It has a read speed of 3500 MB/s and a write speed of 3300 MB/s, which is plenty of speed to edit videos, even if they’re 4K or 8K videos. It uses PCIe Gen 3.0 technology; and if you don’t know what that means, that’s okay. It is essentially a technology that sets the speed limit for transfer speeds. PCIe Gen 4.0 is currently the fastest standard. But its speeds are far faster than is actually needed, and the prices are higher than Gen 3.0 drives.

This Samsung drive is available in up to 2TB of storage, which is a good amount for storing a few projects that you’re working on. It costs between $200 – $220 at the time of writing, making it just over $100 per terabyte, which is a competitive price.

If you have a motherboard that can support a Gen 4.0 drive, and you have a bit of extra money to spend, you can go for the Samsung 980 PRO. It has read speeds of 7000 MB/s, making it more than enough to handle large video files. This is a good drive to buy if you don’t want to worry about your drive being the bottleneck in your project. It costs around $290 for the 2TB version, making it a bit more expensive than the Gen 3.0 version. This makes it technically a better SSD for video editing, but if we’re going for the best bang for your buck then the 970 EVO seems like the clear choice!

Note: Internal drives require specific connectors that may or may not be present on your computer. For these Samsung drives we’ve selected, you will need to have an open NVME M.2 port on your motherboard. In the case of the 980 PRO, that connector will need to be Gen 4.0 compatible to take advantage of its speeds.

The SanDisk Extreme Pro is a portable SSD is the best SSD for video editing on the go. It has a rugged drop-proof case and a carabiner clip so you can attach it to a belt of a backpack. There are two versions of this product, but we’ve opted to recommend the PRO version. This has read and write speeds of up to 2000 MB/s, as opposed to the previous generation which only has about 1000 MB/s read and write speeds. 1000 MB/s is still good, but runs the risk of being too low for your video files.

At $300 for a 2TB drive, it’s a solid price for a drive that is both fast and portable, but obviously compared to the internal drive, you’re paying a lot more for your speeds. This is the drive you buy when you absolutely need to be on the go, or are editing off of a laptop.

It has some nice features for traveling editors and videographers.

One Reply to “What is the Best SSD for Video Editing?”