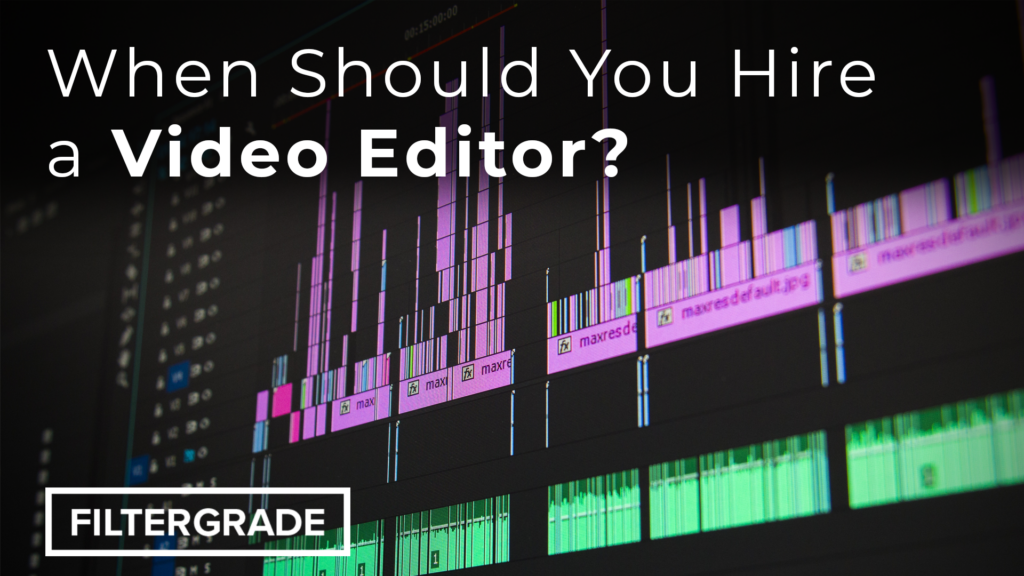 Whether you create vlogs, let’s plays, do-it-yourself videos, or any conceivable kind of YouTube content, you’ve probably groaned when it comes time to edit your footage. Editing isn’t for everyone, and a lot of people prefer the process of filming the video and starring in it, rather than putting the final pieces together. Editing can also take a long time, which is extra painful if your video took a long time to film. In this article we’re going to cover when you should hire a video editor, and best practices for hiring and working with one.

Hire an Editor When You Don’t Have the Skills

Getting behind a camera and editing footage are two completely different skill sets. If you can’t edit to save your life, and don’t want to learn, then you may want to hire a video editor. If you’re just looking for basic edits and not doing anything super crazy with animations or special effects, you may get some enjoyment out of learning to video edit, however. It can be a lot of fun, and may save you money in the long run.

However, you may have the following problem…

Hire an Editor When You Have No Time

You’re probably thinking about hiring a video editor if you feel like you don’t have the time to edit yourself. You have to think about the value of your time and money. If editing is eating into your important free time, then it might be worthwhile to hire a video editor so you can have your life back.

However, there is one factor to consider before making this decision…

Hire an Editor When You Can Afford Them

According to ZipRecruiter, the average hourly rate for YouTube video editors in the US is $23 per hour. Meanwhile, Upwork collects data about all video editing, and cites anywhere from $20 to $100 per hour depending on skill level. How much you should pay your editor depends on several factors, which we’ll talk about more later.

Video editors don’t always bill hourly. Sometimes they charge a flat rate for certain types of videos. Depending on complexity, a normal YouTube video edit could cost anywhere from $50 to several hundred dollars. One rule of thumb that editors use is to charge based on the final run-time of the video, so a three-and-a-half-minute video would cost 3.5 times their hourly rate.

So, you should hire an editor if you need to free up your valuable. But you can’t do this unless you have the funds to pay them fairly. How much is your time worth? Is your free time worth $20 per hour? $50 per hour? These are the kinds of questions you need to ask yourself so that you don’t get put off when an editor rejects your proposed rate.

If you’re making money from ads or sponsorships on YouTube, this revenue can make hiring a video editor feel a lot better. If you’re losing money on your channel, you should probably hit the grind again and continue editing your own content.

How to Determine a Fair Rate for an Editor

Every video project is going to be different, and it may take some self-reflection to decide what is fair pay for your editor. This is also why the aforementioned rule about charging based on the final runtime of the video doesn’t always work. Say there are two video clients that an editor is working with, and both want a 15-minute final product. The first video is going to be cut down from 20 minutes of footage, and all it really needs is to cut out pauses and mistakes, and perhaps have an intro slapped onto the front. This will probably take 30 minutes or less for even a beginner editor.

Meanwhile, client #2 may have 3 hours of footage that needs to be condensed into 15 minutes, and it requires music, animations, effects, and a lot of thought into crafting a narrative. These are two vastly different projects. It’s important for the client (you) to know the difference between a cheap touch-up job (like the first example) and a massive production (the second example) that could easily take 10+ hours to complete.

Understand What You’re Paying For

There’s a reason why beginners at a craft charge less than an expert. If you’re working with an expert, you pay for that expert skill, and access to advanced editing techniques. This also helps when picking an editor. If your edits involve mostly simple cutting and effects, you can hire a video editor with a lower rate and skill level. Hiring a longtime editor for a simple video is overkill, and you’ll overpay for the work.

For the non-editors out there, it’s also important to know what goes into an edit. It’s not just editing.

If you didn’t send your footage with markers to highlight the parts you want cut out, expect the editor to take roughly half of the runtime of the footage to do a first pass identifying the best clips to use. For example, expect a 3-hour clip to take 1.5 hours to go through and pull out clips. Editors sometimes use audio waveforms to visually identify cuts, or they’ll watch the entire thing at double-speed. Even with markers or notes, it will take some time, but doing so will greatly speed up the process.

Finding music, animated graphics and titles, and additional effects also takes time. Depending on how much is needed, it could take a few minutes, or an hour or more. Picking out music and assets like this upfront will save a lot of time in editing, and you won’t have to approve or deny your editor’s choices. Second-round edits will also take some time, although certainly not as much as the main edit.

You Get What You Pay For

You know this already: you get what you pay for. An editor with a low rate might not know advanced editing techniques or be able to accomplish simple tasks quickly. What a $100/hour edit does in one hour might take a $25/hour editor four hours to accomplish. If you need a fast turnaround, which would you rather have, despite spending the same amount of money at the end of the project?

How to Make Life Easier for Your Editor

Pros and Cons of Hiring and Editor

Hiring an editor has some upsides and downsides that you’ll run into. Finding a good editor that you work well with will negate most of the cons, but it can be hard to find a great editor.

Should You Hire a Video Editor?

There comes a point where every content creator needs to hire a team and outsource some tasks. Editing is one of the first tasks that a lot of people outsource since it can be so time-consuming. If you have the money to pay an editor what they’re worth and need to reclaim some of your time to film more videos, hiring an editor will be a worthwhile pursuit. Have fun being more productive!