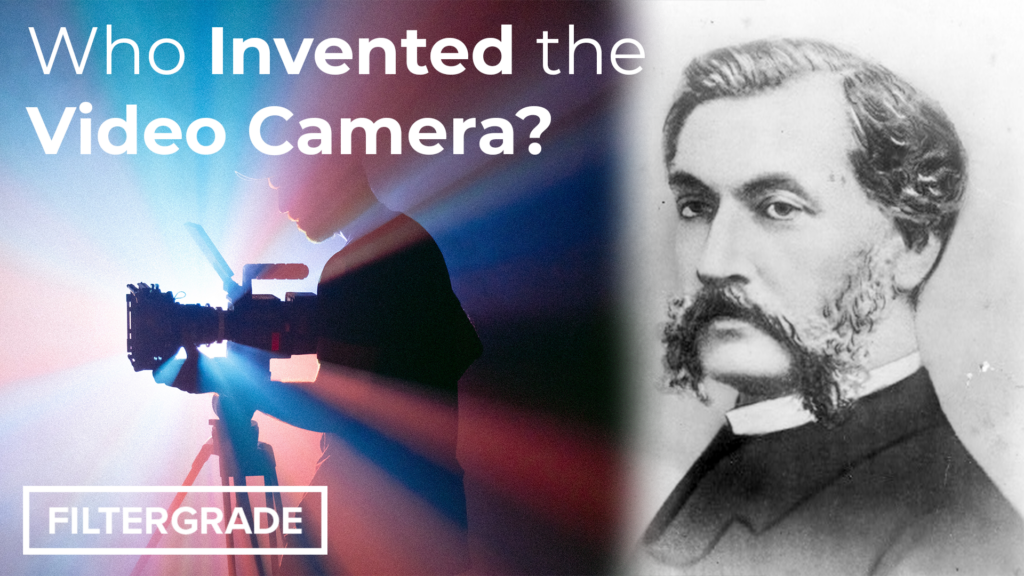 The creation of the first video camera is generally attributed to Louis Le Prince, in 1888. He is responsible for the oldest video that exists, titled Roundhay Garden Scene. It’s simply a video of people walking through a garden, but it marks a major breakthrough in technology. But the story of the first video camera is strangely rife with controversy and intrigue. In this article, we’ll be diving into the early video cameras and the historical figures behind them.

In 1888, Thomas Edison created plans for a camera that would record moving images and capture them on a cylinder. But despite Edison’s desire to be first, he was not. In the same year, a French artist by the name of Louis Le Prince invented and used a video camera of his own design, which recorded to paper film. The test footage is called Roundhay Garden Scene, and just shows a group of people walking around in a garden. The original was only 52 frames long, but only 20 have survived. These 20 frames were gathered and preserved by the National Science Museum in 1930.

Le Prince is confirmed to have filmed one more test, but he mysteriously disappeared before he could demonstrate his camera to a United States audience. Numerous conspiracy theories exists around his disappearnce. The most popular is that Thomas Edison had him killed, so that he could be the first person to unveil the video camera. There is no hard evidence for this theory, despite the motive. Experts agree that it is most likely that Le Prince committed suicide in 1890 as a result of his crushing debts.

In the same year of his death, Thomas Edison’s team experimented with recording film to a strip of celluloid film. Le Prince’s family tried to defend his legacy, and in 1898 some of Le Prince’s footage was shown as evidence that Edison did not invent motion picture recording. If the court sided with Edison, he would get royalties for all uses of film moving forward. The court did side with Edison, but this result was overturned in the following year. Despite this, Edison reissues his patents and controlled the motion picture industry for many years. Le Prince’s legacy and his credit died with him, and Edison’s name has since become associated with early film.

While Le Prince’s camera bears a resemblance to modern cameras, being single lens and with paper film, there were plenty of less conventional early motion picture cameras.

The earliest and most outlandish video camera is the chronophotographic gun. It was invested by the French scientist Étienne-Jules Marey in 1882, just a few years before Le Prince’s invention. As the name suggests, it looks like a gun, complete with stock, barrel, rotating drum, and trigger. It was inspired by an even earlier device called the photo revolver or Janssen revolver, invented by French astronomer Pierre Jules César Janssen in 1874. Not quite a video camera, this device was capable of capturing 48 still frames in a 72 second period. By contrast, the chronophotographic gun was able to capture 12 frames per second.

Despite these facts, the chronophotographic gun was not a movie camera, and was not trying to be one. The resulting image was 12 frames overlayed onto the same film, creating something akin to a double-exposure photo (well, a 12-exposure photo perhaps). These images and others like them were used to study motion, generally of humans and animals, and greatly helped scientists of the time.

While clearly Thomas Edison did not invent the first movie camera, he is certainly known for it. As is true for a lot of Thomas Edison’s inventions, the movie camera attributed to him was actually invented by someone Edison employed. This man was the Scottish inventor William Kennedy Dickson. After several attempts in different directions, Edison ended up encountering Étienne-Jules Marey and his chronophotographic gun. He advised Dickson to pursue the idea of using rolls of film, inspired by Marey’s approach. Dickson worked with the Eastman company (yes, the Kodak one) to develop a celluloid film that would work with the device. Eventually, he settled on 35mm film, which has stood the test of time and is still a standard for filmmaking today.

After Dickson perfected this invention, Edison patented it and took credit for the invention of the first movie camera. In reality, it was not the first and he did not invent it. But he was the first person to receive a patent and he supplied the funding and resources to invent it through his company.

Despite the breakthrough in camera technology, it would be some time before movie projectors as we know them existed. The early recordings from Edison’s camera had to viewed through a peephole.

Technically, there is a difference between a movie camera and a video camera. Movie cameras capture to film, and video cameras capture images electronically. The earlier attempt at a video camera was the Phonovision. This was a proof of concept experiment created by John Logie Baird, a Scottish inventor. These experiments were considered a failure in terms of the general public being able to use the technology. Playing back the recordings was essentially impossible, and only played at five frames per second.

The video camera tube was the next leap forward. This technology, based on the cathode ray tubes used in televisions, would dominate television cameras from the 30s up until the 80s.

In the 80s and 90s, video camera tube technology was overtaken by charge-coupled device and CMOS-based sensors. This technology was lower-resolution at first, so was mostly relegated to consumer devices. Eventually, as we know, electronic and digital cameras overtook older technologies. All consumer cameras are digital now Aand many cameras used for television and movies are technically “video cameras”, yet offer a lot of quality. Many filmmakers still use film cameras to maintain the filmic look, but there are no shortage of movies shot on digital cameras, due to their ease of use. In fact, in 2017, 92% of films were shot digitally.

One Reply to “Who Invented the Video Camera?”