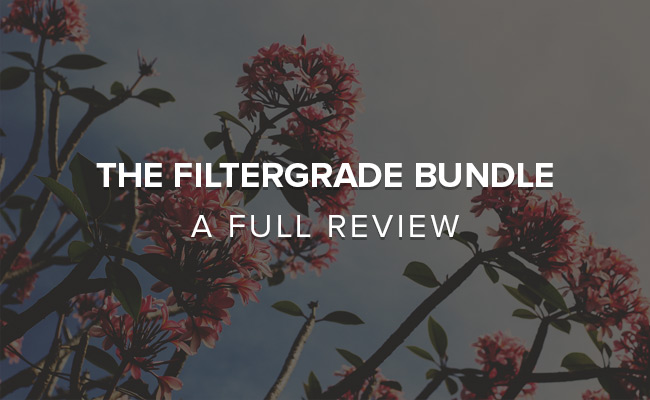 I get a fair amount of questions about different aspects and features of the FilterGrade Bundle, so I figured I’d write a full review detailing all included styles of effects, features of the bundle, and a few testimonials.

If you’ve been thinking about buying the FilterGrade Photoshop Actions Bundle for a while, or are just stumbling across it today, I suggest running through this post, as it will give you a much better idea of what is included.

Already convinced you’ll love it? Go straight to the Bundle.

Let’s start with some of the included Photoshop actions, shall we?

The first two series of actions in the bundle are the Retro Series. The retro series each include 20 beautiful retro and vintage photography effects. The perfect adjustments for photos that include a hint of vintage. 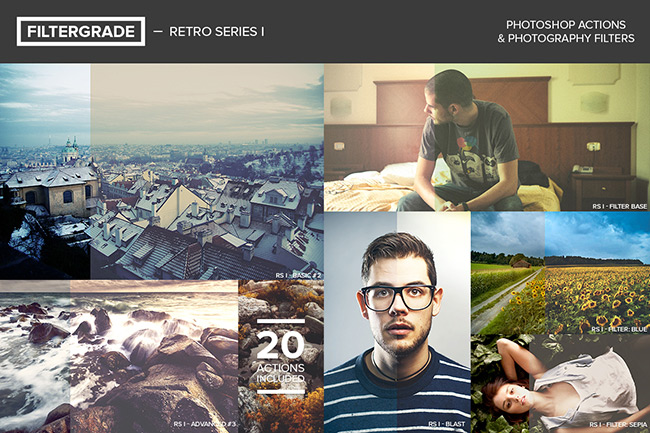 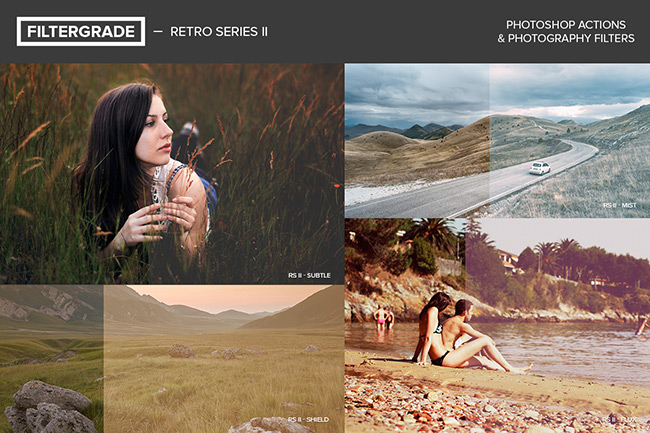 Above are the main previews for each series of Photoshop actions.

These effects look beautiful on a wide range of photos and can be adjusted for a more subtle or a more harsh effect. If vintage and retro is your thing, these effects work wonderfully.

Below are a few more previews of individual effects included in the Retro Series.

The next two series in the bundle are the light leaks. These are probably some of my favorite effects in the whole bundle. I’m obsessed with light leaks, and I think they really add to that “vintage” look in a photo or design.

Not to mention these are some of the most advanced Photoshop actions of their kind and run smoothly without error, even on top of other actions, making it easy to combine and adjust effects. 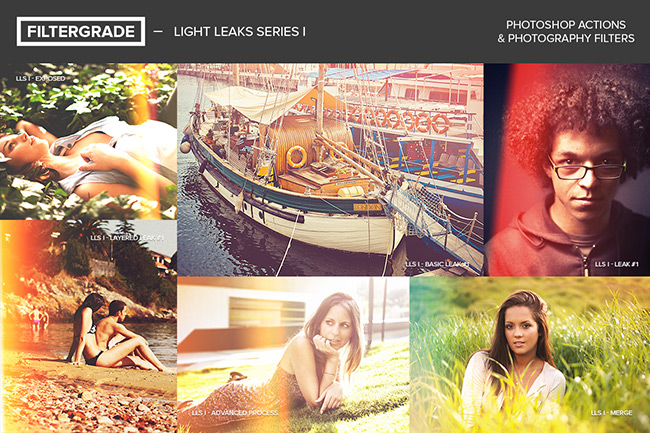 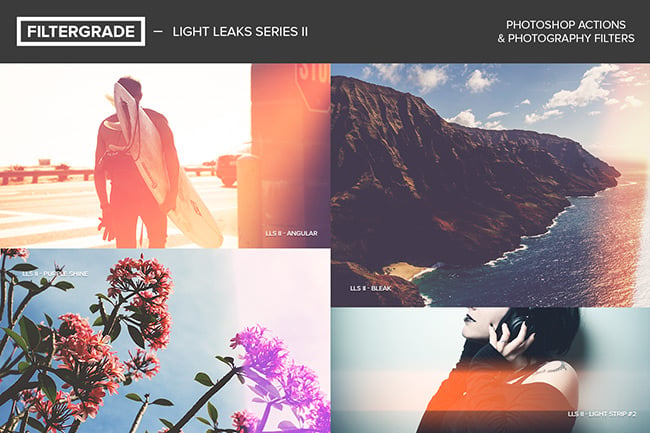 Above are the main previews for each series of Photoshop actions.

If you plan to use the Light Leak Photoshop actions, you have to be willing to adjust the opacity, erase or mask some of the effect, and work with the action to make it look good. Due to the nature of light leaks, this is a slight sacrifice you have to make.

However; the effects work well on most photos, so don’t be afraid to experiment with them and get comfortable testing.

The next two series in the bundle are the Film Series Photoshop Actions. In total are 40 hand-crafted effects made to emulate realistic film and cinema style photography effects. 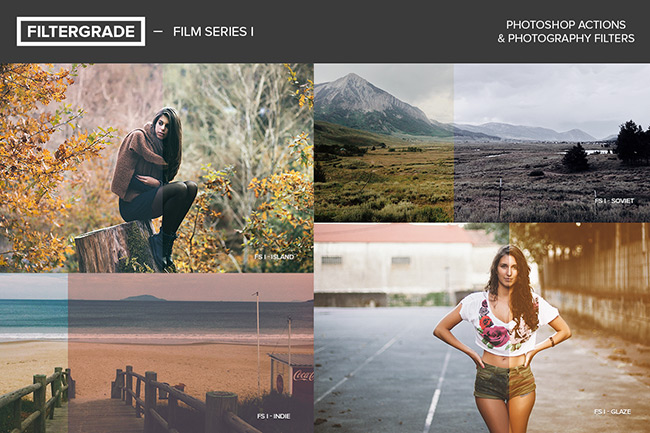 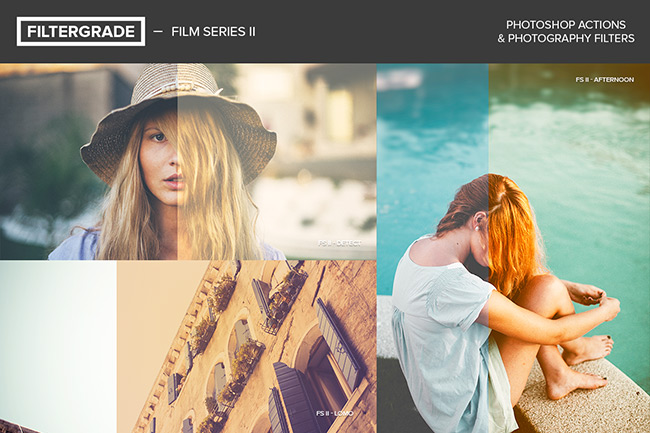 From harsh effects meant to represent Soviet Russia and War times to subtle vintage tints and burns, the Film Series is one of the most versatile sets included in the bundle.

Below are a few more previews of the effects included.

The next three series included are all categorized as subtle effects. The first being the Chill Series, the next being the Light + Seasonal Series, and the final being the Fashion + Blush Series.

These three sets of effects are perfect for chill summer photos, DIY and craft type photos and blog posts, and fashion related content. 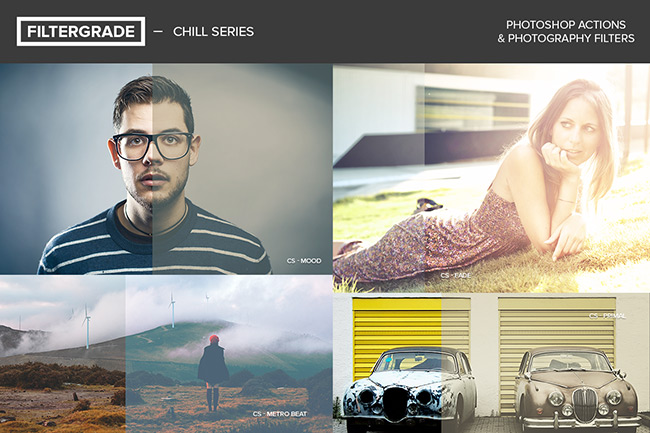 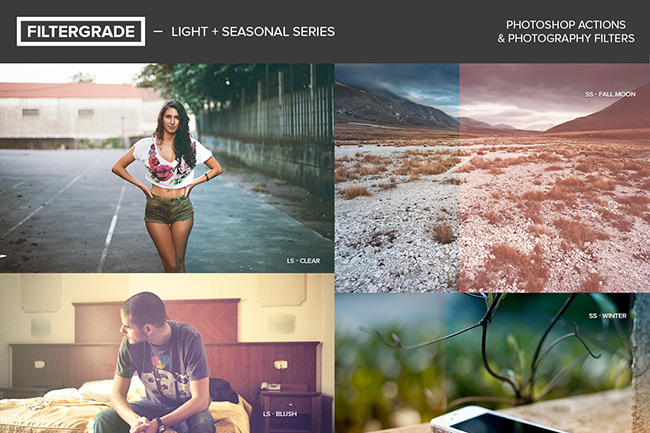 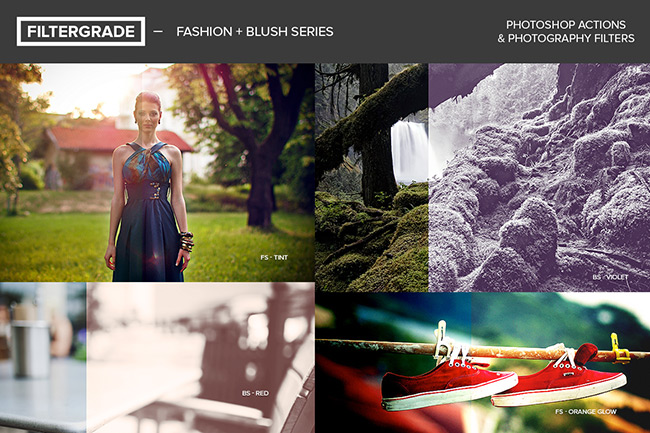 These particular sets are much more stylistic and could be used as fine art photography actions. The first two series can be used for subtle and simple adjustments, while the third is perfect for heavy adjustments and tints.

The next series included is our Black & White Series. Filled with 20 beautiful black and white Photoshop actions, this is one of the crowd favorites. Black and white effects are great for a variety of projects. 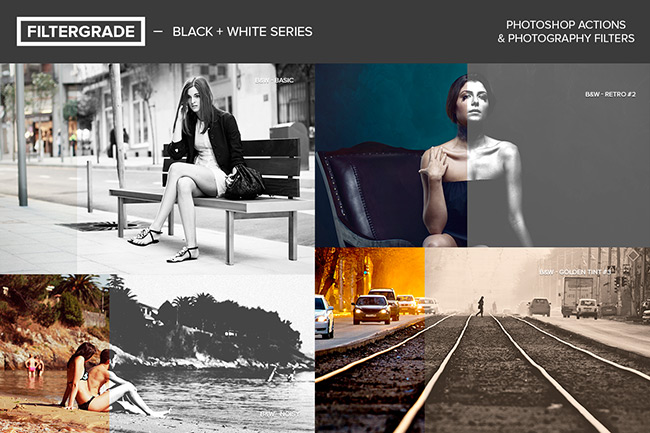 You may be wondering how we can create 20 Black and White photo effects. I wondered that myself, until I started working. Included are various tints, tones, and adjustments. There are retro and vintage variations, sharp and blurred variations, and even yellow/orange tinted versions to suit everyone’s needs.

The final series included in the bundle is the Photo Retouch Series. This is a really useful set of 20 retouch and photo adjustment Photoshop actions. Used primarily for light tweaks this pack is perfect for the subtle adjustments and light increases/decreases in an image. 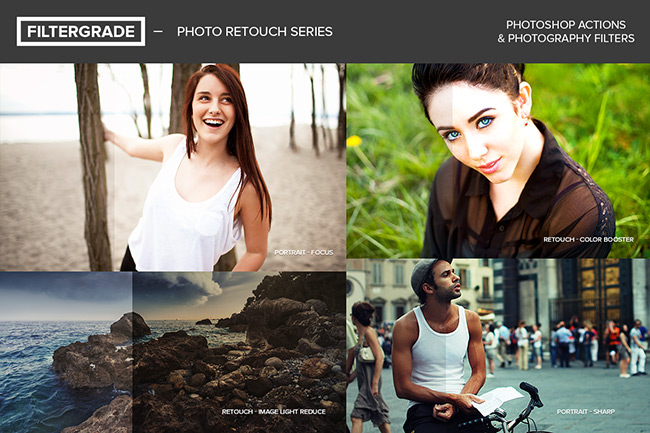 As you might see above, another great asset included in our Retouching Series are 10 handy actions for portraits and people-focused photos. There are intense HDR effects, image sharpeners, and more.

Next in this review, preview, or whatever you’d like to call it, I will go over some of the features and specs of the FilterGrade Bundle.

By now you are probably wondering what is included. Here is the list.

The Photoshop Actions Bundle is compatible with Adobe Photoshop.

It has been tested in CS3, but about 20% of the actions came back with errors or problems.

When you download the bundle, all 220 actions are in one group. Upon install you’ll see them clearly labelled to fit each series. 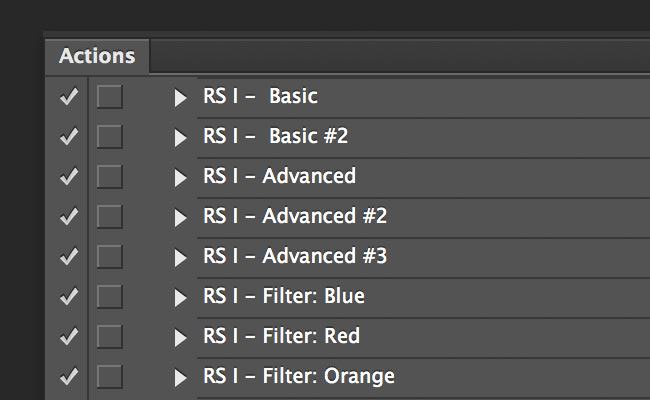 The first part of the name signifies the series. So RS I = Retro Series I. The rest of each action is named after the desired effect.

After some testing and trial & error, we’ve been able to significantly speed up our actions. They run smoothly and without error. 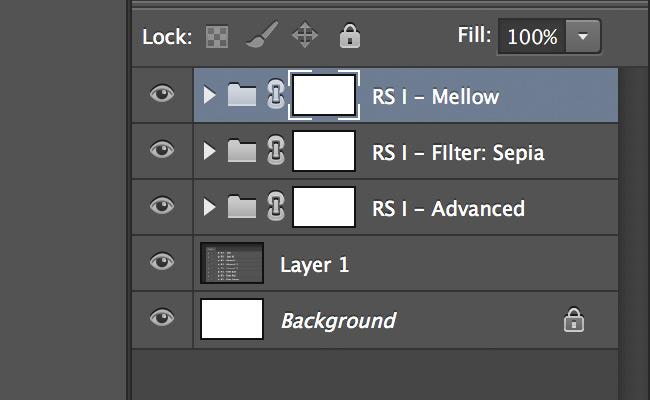 Possibly the best, and my favorite feature of our latest update is that all actions are now “stackable”. This basically means you can play as many actions on top of each other without error as they are all stackable.

This significantly speeds up workflow and makes it easy to add retro effects and light leaks in seconds. Check out this image we posted on our Instagram recently, edited with the Retro Series and Light Leaks Series in under 5 minutes.

Play All is another great feature we’ve thrown in to our latest update. After installing the bundle, you’ll see 11 actions labelled “Play All – X Series”, fill in X with whichever series you choose. 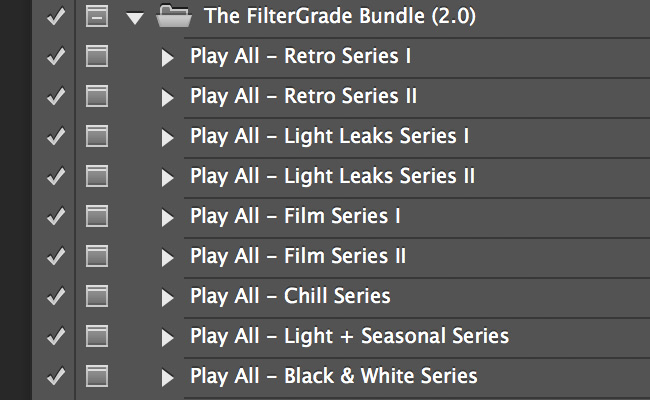 You then click this, and it plays all of those effects so you don’t have to do it one by one.

After doing so, you can easily click on and off each effect, combine them, and work until you find a desired solution.

The final feature included in each and every Photoshop action by FilterGrade is a handy layer mask added to the effect.

This means after the action is played you can erase or lower the intensity of an effect with the mask. This makes it really easy to adjust light leaks, effects that are too intense, or anything.

After all the features, here are the benefits I, and hundreds of other photographers, have found from using the bundle.

To finish out this preview and review of the bundle I thought I would include a few testimonials from happy customers.

“What a great bundle! Thanks for doing all the work for me! :)”

“Love these, adds a punch to what may have been some very dull photographs!”

“I am in love with all of them, thank you very much for these lovely actions ;-)”

“Just got this product yesterday and it’s awesome! I’m really enjoying it and it’s giving that effect I’ve always liked in photographs. Thank you!”

This concludes the preview/review of the FilterGrade Photoshop Actions Bundle.

It is probably the best deal on our site, and includes such a wide variety of actions and effects, you’ll never get sick of it.

Updates and support are free, and we’re always here to help be it over email, skype, or some other form of communication. :)