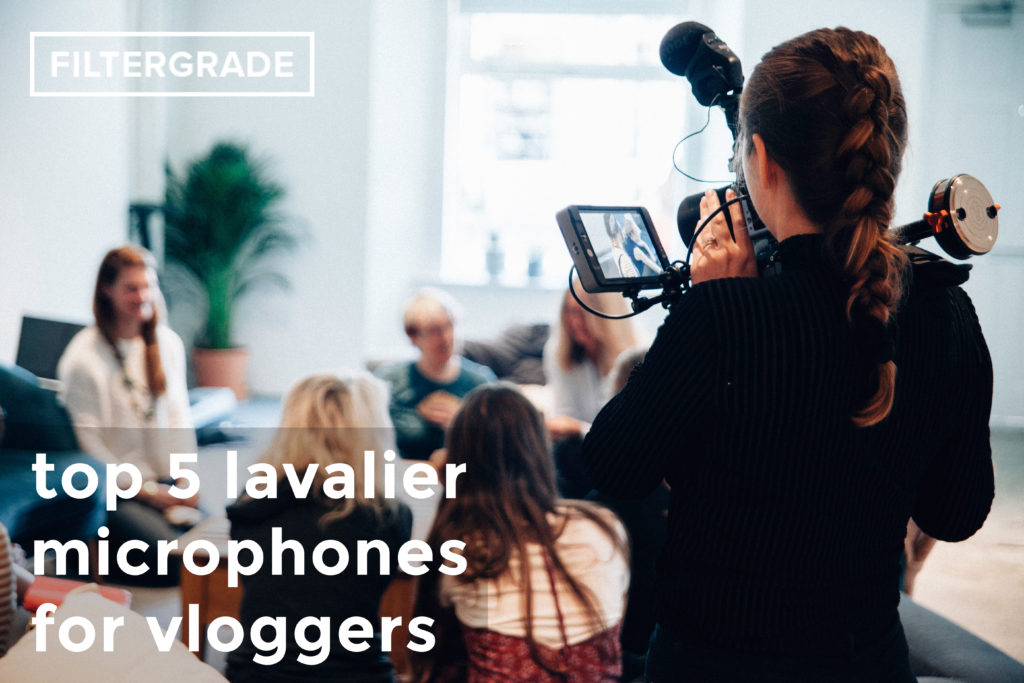 The world of vlogging is taking off right now – 2019 is the year for videos so if you want to start your own vlogging channel or give your vlogs that extra push, you’ll need to make sure you can be heard clearly if you want to be successful. We know that many successful vloggers out there have a desire to do this job full time, so this list is going to help ensure that you pick out the best equipment to allow you to capture crisp, clear sound!

Without the proper gear, you won’t be able to provide the quality that most people who are watching vlogs expect. Today we are going to talk about some lavalier microphones for recording audio with the best vlogging abilities in the market. Let’s take a look at the top five lavalier mics for vloggers!

The first model we will talk about is the Rode VideoMic Pro, which is a condenser mic which is one of the best microphones for vlogging. The Rode combines its shotgun style with an added “Rycote Lyre” shock mount which enables the mic to be stable and enables the mic to be isolated from any rumble that vibration can cause. A good example of this is if you’re a travel vlogger, there are a lot of ambient audio from people or environments – with this mic you can minimize that issue.

Now we will take a look at the Zoom H1, stated to be one of the best vlogging microphones who need something that is handheld and works for a lower price-point. The Zoom H1 is a good pocket-sized handheld recorder which is totally versatile. The H1 takes a single AA battery, which gives the record up to 10 hours – which is pretty good for one battery and can be switched out in case you need even longer. The Zoom has a pair of pro-quality XY stereo condensers built-in, which means you don’t have to plugin your own mic, but it does come with a 1/8” input on side if you do.

Up next we have a lavalier mic with a bit higher quality than some of the previous mics, which makes it one of the best vlogging microphones for smartphones, tablets or cameras who want the mic on their body. The smartLav+ is designed with a multi-level capsule to pick up sounds from all directions, and also has a foam pop filter which helps eliminate vocal plosives or rubbing noises that you might get when interviewing people or talking yourself. Good things comes in small packages with this mic, it still has a frequency response of 20Hz to 20kHz, along with a max SPL 110db which is pretty great considering it is 0.01 lbs.

Now that we are getting near the end of our guide, we have a more budget-friendly TASCAM DR-05, a stereo recorder with built-in omnidirectional microphones. The DR-05 fits in the palm of your head, which makes it easy to take it anywhere without an issue. The TASCAM is capable of recording in MP3 formats of up to 320 kbps. With the pair of multi-direction microphones enables you to get clear recordings, while also being able to handle sounds pressures up to 125dB – the DR-5 is one of the best vlogging microphones for live event recording like parades, festivals, or even concerts.

To wrap things up, we have the Zoom iQ6 – a XY stereo recording mic that is multi-level best microphones for vlogging specifically made for iOS devices. The Zoom is designed with a lightning connector, so all you have to do is just plug the lightning connector into your Apple device and TA-DA! Just that easy! The X/Y recording configuration is designed for covering a wide area while still being able to capture the desired sound sources in the center with clarity, making this mic, the Zoom iQ6 ideal for live stereo recordings or really any type of vlogging you’ll be doing on your iPhone or tablet.