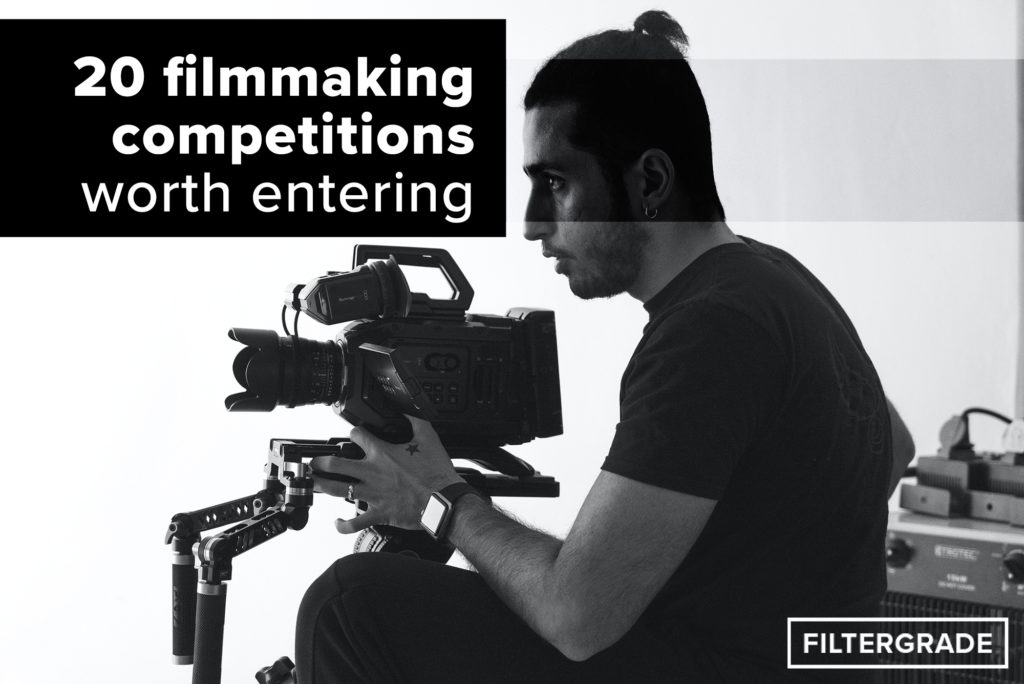 The red carpets, the photographers, the fame… There is a lot of excitement that goes on at film festivals and as someone looking to make a name for themselves in a highly competitive industry they are a must. But, with some of these competitions having a hefty entry fee and only a small percentage of entries making the cut, which ones are worth the time and money? While some competitions quickly come to mind there are plenty of others that don’t get as much media coverage that are definitely worth the investment. Below, you’ll find the 20 best filmmaking competitions worth entering that can potentially launch your career.

Submissions can be short and feature-length documentaries, narratives, television pilots, and VR/AR projects. Nearly 10,000 submissions are sent in every year with only about 2% of the films selected for debut. Even with the small percentage of getting a debut this is one of the top documentary festivals around. The entry fee is between 40-$110 and well worth it.

The Tribeca Film Festival tends to bring the largest audience  making it possible for independent films to get noticed. Entry Fees run from $60 to $500 and submission can be short or feature length films, TV programs, innovative projects which includes VR projects, games. 360 films and more, new online works, and a creative category for advertising and entertainment submissions.

This festival is centered around independent filmmakers. You can submit a film as a feature-length, documentary, or experimental. Entry fees run from $25 to $85 dollars

This is a truly unique film festival that encourages low-budget films that push the limits. The festival is hosted in Park City, Utah and entry fees range from $40 to $110.

You can enter this festival for between $50 to $85. The Austin Film Festival has premiered a number of Academy Award Winning nominations and winners. Though the festival can be more writer focused it is one of most filmmaker’s favorite festivals to attend.

The SXSW is a diverse festival held in Austin, Texas. It favors innovative entries from emerging filmmakers. Films can fall under a number of categories such as narrative features, short films, documentary, visions, Midnighters, global and VR/AR/ MR. Submission fees range from $40 to $110.

Held in Telluride, Colorado, this film festival is an all in one experience. Only world premiers entries are accepted at this festival making it one of the more prestigious on the list.  The entry fees run from $45 to $95 per entry but are well worth it when you consider many of Hollywood’s elite filmmakers premier their new films here.

This is probably one of the biggest and well-known film festivals around the world. This isn’t your typical festival and competition to get selected is of the highest level. Even though few entries are accepted the $50 to $400 entry is well worth the chance as being selected puts you in an elite category of filmmakers.

This is one of the largest festivals in the world and features at least 14 different categories. Many of the films that make their world premiere here have gone on to be oscar and academy award winners.

The Raindance Film Festival is held in London and is the ideal setting for unknown filmmakers. It is one of the best documentary festivals to enter but also accepts submission in the short film, music video, VR/AR, and web series categories.

Being selected for the Venice International Film Festival tends to lead to great success in the United States. It only chooses the best 100 submissions to debut but well worth the chance to be recognized as a top filmmaker in the world.

The Nashville Film Festival has been running for over 50 years and showcases over 200 films from 30 different countries. Winning films in the narrative, documentary short, and animated categories are eligible for Academy Award consideration.

The Portland Festival is a laid back event but that doesn’t make it less aspiring. The festival has strict quality expectations from submissions in various categories including; narrative feature and short, documentary features and shoes, and advertising. But, there are no premiere restrictions so you can submit a film that has already debuted elsewhere.

The DC Short International Film Festival is one of the largest festivals that is held In Washington D.C.. Over 100 countries have participants that make a submission and feature 30 showcases. Submission must be under 40 minutes long to be considered. They also host an online festival. Submission fees are low starting at just $40!

This film festival takes place in Palm Springs, CA in the United States. It has only been running for about 10 years. It is one of the largest documentary and animation festivals in the US. International entries are accepted in both short and feature-length categories. Those who win the qualifying awards for Academy Awards in the documentary short category. Additionally, filmmakers have the opportunity to score funding to complete their feature films through the American Documentary Film Fund.

Held in Canada this film festival doesn’t get as much hype as the other on this list, but is well worth the $35 to $80 entry fee. It is one of the few festivals where submissions are Oscar-qualifying.

Held in Indianapolis IN, the Heartland International Film Festival features over 130 independent feature films. Cash prizes go up to $20,000 dollars with the top winner eligible for Academy Award Qualifying in the short film category. There are plenty of categories to submit your films to such as narrative feature, documentary feature, social impact with additional categories for films to be judged in such as Best Premiere Award and Best International Feature Film Oscar contender. With so many categories and awards the small entry is well worth it.

This is one of the few festivals that can boost your film to Academy Award qualifying in all three accredited categories for Narrative Short, Documentary Short, and Animated short. Nearly 400 filmmakers participate in the festival each year. It hands out some pretty impressive prize package

This festival is unique but is considered one of the top documentary festivals in the world. You can submit feature-length or short documentary films. The festival takes place in the United States in Maine each year.

This film festival gives short filmmakers an ideal setting to advance their careers. Each submission goes through a series of screening and if your film is chosen and then wins it becomes Academy Award qualifying. Each submission must be under 40 minutes.