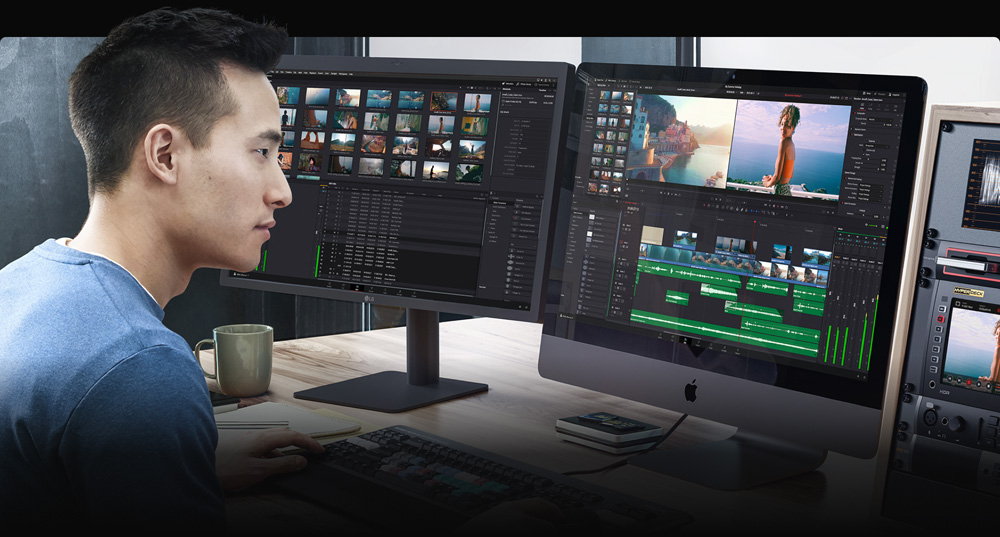 So you want to be a YouTuber, huh? More than likely, your videos will need editing, whether you have to cut out a mistake, add a title card, or add a complex special effects scene. Picking a video editing program can be difficult with so many great options out there.

So we’ve taken notes on what programs YouTubers use to edit their videos, as well as the best features and pros and cons of each! After reading, you’ll be able to feel confident when you choose editing software to build your YouTube career.

Looking for popular LUTs, video templates, and transitions to edit with? View the Video Editing category →

Adobe Premiere Pro is an incredibly popular yet polarizing video editing software. It is unquestionably the industry standard for both YouTube editing and professional editing. It’s popular for editing Hollywood movies as well. That being said, the subscription model is a major point of contention even for users of the software. Unlike other software that can be had for a one-time purchase, Adobe Premiere Pro has a never-ending subscription. It costs $20.99 per month, or $52.99 per month if you purchase the entire Creative Cloud suite. If you use multiple Adobe programs, this $600+ per year price tag may not be too painful for what you’re getting, however.

In terms of YouTube editing, Premiere Pro has a lot of built-in effects and templates that will make your editing experience easy and consistent. The interfaces are relatively easy to work with, despite there being an overwhelming level of complexity underneath. If you’re brand new to editing, you have two choices: Start with Premiere Pro so you have that knowledge as you grow, or start with something more simple. Premiere Pro is used by larger YouTube channels with massive teams for a reason. It supports 8K footage, collaborative editing across users, and integration with VFX software like Adobe After Effects. But it might be overkill for a newcomer. Even if it is overkill, its popularity means that there are countless tutorials from Adobe and from users about how to use the software’s extensive list of features.

Final Cut Pro is a popular editing software for Mac users, and that’s because it only works on MacOS! This is unfortunate for Windows users because it’s actually a great editing tool. It’s an Apple-specific upgrade to iMovie. It’s used not only for YouTube videos but also for television and movie production. Over time it has gained useful features common in Premiere Pro like multicam editing and external monitor support – oh yeah, and you can use your iPad as a second display!

When it comes to YouTube editing, Final Cut Pro has all the features you could need for titles, effects, and color grading. It is very similar to Premiere Pro in terms of what you can create. For YouTube specifically, you’ll have no problem crafting gorgeous stories or applying popular effects. This is another industry standard. So if you’re a Mac user and would rather pay a one-time fee, then Final Cut Pro is a fantastic choice. You will have plenty of tutorials and guides to choose from in order to master the software. Much like Premiere Pro, Final Cut Pro is brimming with features and may be overkill for many newcomers to the YouTube scene.

DaVinci Resolve by Blackmagic rivals Final Cut Pro and Premiere Pro in terms of features, so the fact that it’s free is absolutely insane. However, it is not for the faint of heart. As a piece of editing software, it is not the most friendly for new editors, and is incredibly complex. Its claim to fame is its amazing color grading tools. But it has many of the standard editing tools you would need to make a YouTube video.

The timeline editor is pretty standard, as are the tools used, meaning the skills you learn in Resolve can be translated to another editing tool if you ever find the need to switch to something more mainstream. If you’re worried about missing out on the advanced features of Adobe After Effects and its easy integration with Premiere Pro, Blackmagic has you covered! Included in Resolve is a tool called Fusion, which houses all of the advanced effects. While you’re certainly not going to accomplish much in After Effects without a tutorial, Fusion is a whole new beast. It is a powerful tool, but deeply complex and technical, using a node-based system that may not be intuitive to many users. But, all of this is a fairly moot point if you’re just looking to do fairly basic YouTube video edits, and not produce a feature film.

So obviously not every YouTube is editing on software that costs hundreds of dollars. Sure, the established ones are shelling out that kind of money, but many new YouTubers can’t afford that, or can’t justify that cost. Meanwhile, DaVinci Resolve may be free, but comes with a steep learning curve.

So, for someone who needs editing software that doesn’t break the bank, but also doesn’t break the brain, we recommend Wondershare Filmora X. It comes in at a one-time cost of $69.99, making it quite affordable. The entire editing process has been simplified but still maintains key features. For example, Filmora has color grading features, but they are limited and simplified so that a newcomer can easily grasp the concept. This makes it a great choice for beginner editors who are intimidated by what more advanced software has to offer. With Filmora, you’ll be editing before you know it. It’s designed to help new users ramp up quickly, at the cost of reduced flexibility.

On top of that, it’s lacking some of the more advanced features that bring up the price of Premiere Pro and Final Cut Pro. If you’re sticking to YouTube editing rather than professional editing and VFX work, Filmora will do everything you need it to do!

Other Editing Software to Consider

In addition to the top-tier software we mentioned here, there are plenty of other editing softwares out there. These all have their merits, but we found them to be lacking in some way compared to others. A lot of these fall into the Under-$100 category, where we feel Wondershare Filmora X wins out over the competition. You can consider these other software options, but we would definitely suggest choosing from the other software we recommended.

If cost is not a big concern, and you want the best of the best in terms of features, compatibility, and professional knowledge, Adobe Premiere Pro is our recommendation.

What if you have time but not money? Then we recommend DaVinci Resolve for its sheer depth of features along with its unbeatable price tag.

If you’re new to editing and don’t want to invest a significant amount of money on expensive software or time on complex software, we recommend Wondershare Filmora X.

View next: 10 Small YouTuber Tips for Growing Your Audience

One Reply to “What do YouTubers Use to Edit Their Videos?”