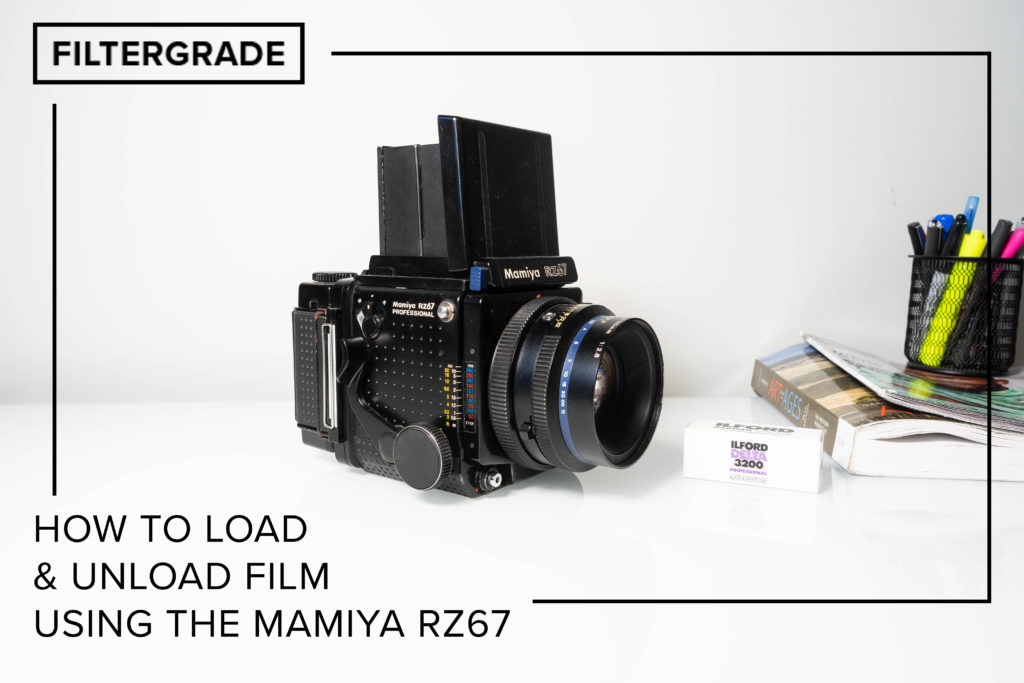 Learning how to load film into your Mamiya RZ67 is one of the first, and most important things you will need to learn to if you want to start using your camera. It can be a bit intimidating at first – in part because the sheer size of the camera, but also just beginner’s nerves. No need to worry though because we’re going to walk you through the whole process, and then we’re going to show you how to unload your film as well.

Learn How to Load and Unload Film with the Mamiya RZ67 in our instructional video here!

How to Load Film Into the Mamiya RZ67 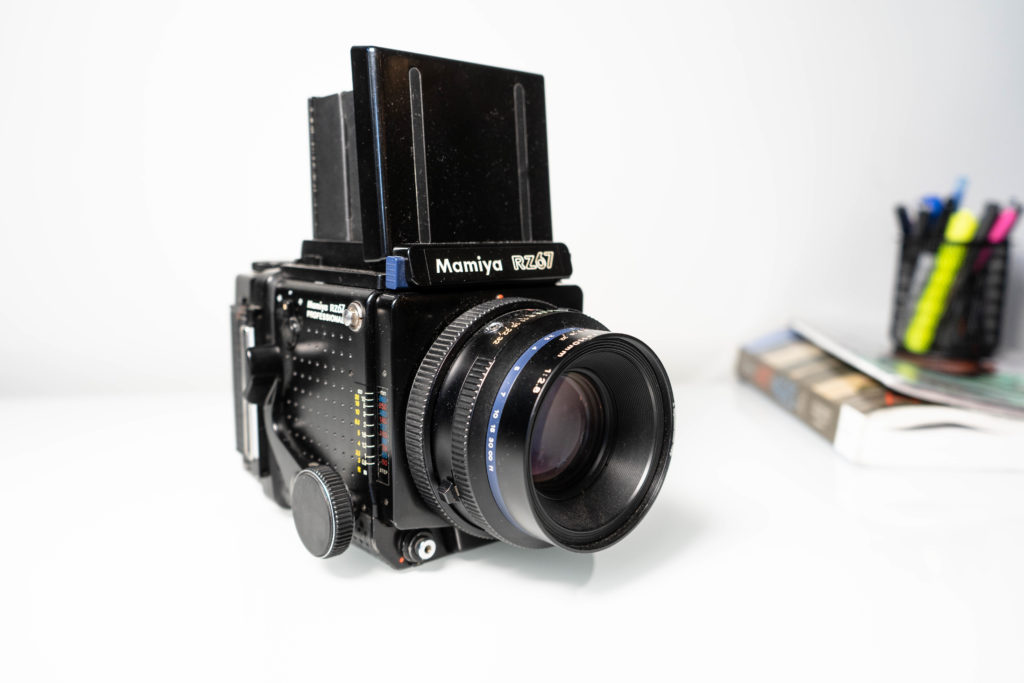 Getting to know your camera is one of the first steps of becoming a photographer. How well you understand your camera will play a role in how you take your photos (composition), how the photos actually come out, and also it can affect the way you think of using your camera (where and when). 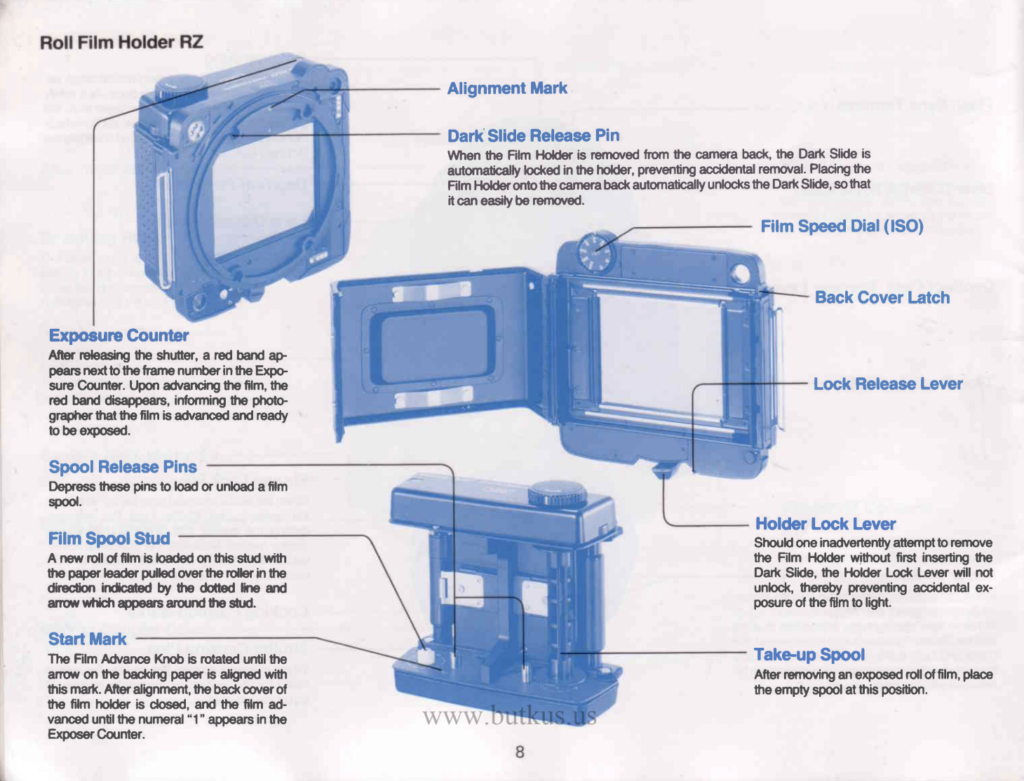 To start, we’ll need to take the Film Back off of the camera. The film back is the main compartment at the back of the camera that can be removed using the Lock Release Lever located underneath the base of the film back. *Note – if the Dark Slide is not placed in the film back, then the Holder Lock Lever will not allow you to unlock the lock release lever.

Once you have the film back separate from the body of the camera we can get started.

Start by unlatching the top and bottom Back Cover Latches, respectively. This will cause the back cover to open up, revealing the Film Spool. Once the film spool is visible, feel free to remove it from the main film back compartment and take a look at the various pieces. Make sure that the (empty) Take Up Spool is located securely on the right side. Once the film back looks like this, you are ready to begin loading the film.

Go ahead and grab your film

and take all of the wrapping off. Place the film upside down with the film facing out into the Film Spool Stud by pressing down on the Spool Release Pin. After this begin to pull the film out slowly and load it by wrapping it around the back and lead the film strip into the take up spool. Work the end of the film so that the paper can fit into the take up spool’s slit and then begin to crank the Film Advance Knob until the start line on the film aligns with the start line of the film spool indicator.

How to Unload Film From the Mamiya RZ67

Now that you’ve learned to load your Mamiya RZ67, you’ve (hopefully) gone out and shot your first roll of film! The next step that you’ll need to know before seeing your photos will be to unload the film from your camera. This will be very similar to loading your film, but in a reverse manner so it should be relatively easy to follow along to. 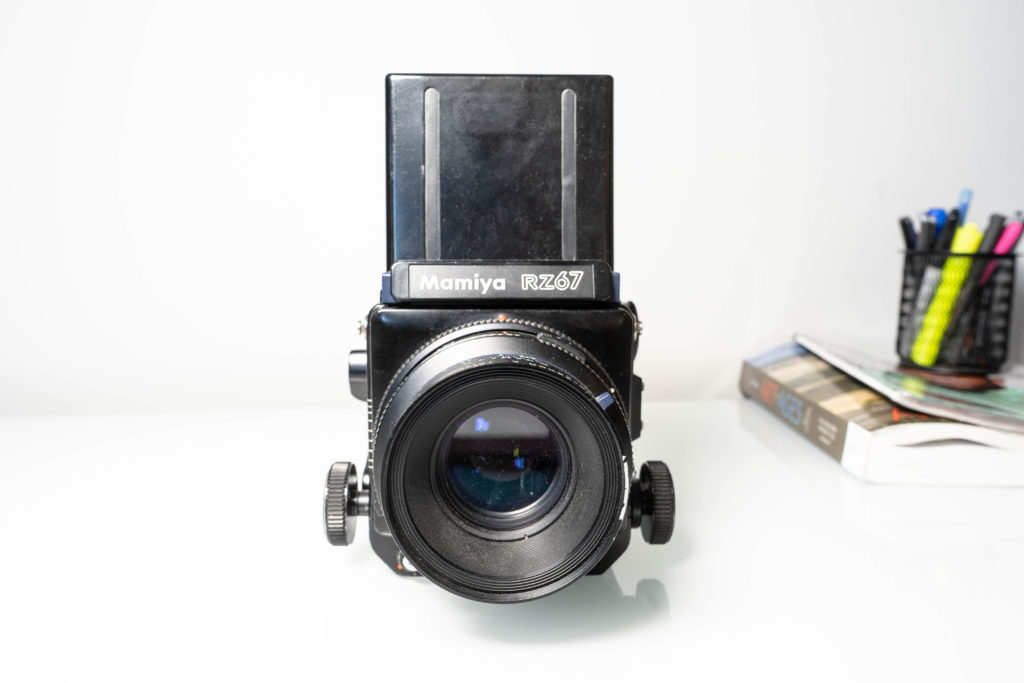 Once you have taken the last photo of your roll the film frame counter will show a ’10’ with a bit of a red slide covering it – this indicates the last shot has just been taken. After this happens, you are ready to unload the film. *Note – to check to see if it is your last frame, also try taking another photo.*

Start by using the cocking lever to fully forward the film off of the Film Spool and on to the Take Up Spool to ensure that you will not expose any of your images when you unload the film. Now that you have gotten all of your film onto the take up spool, you are free to unlock the back cover latches to find your film wound up on the take up spool in the film back.

After you open the film back and you can see your roll of film, go ahead and press down on the Spool Release Pin and carefully grab your roll of film so that it does not unroll. Most rolls with provide a piece of liner so that you can seal the film shut until you are ready to develop.

And that’s it! Go ahead and close up your camera back and reattach it, and then you are all down with loading and unloading your Mamiya RZ67!

Feel free to let us know if you had any troubles, or if this tutorial helped you get started with the Mamiya RZ67!