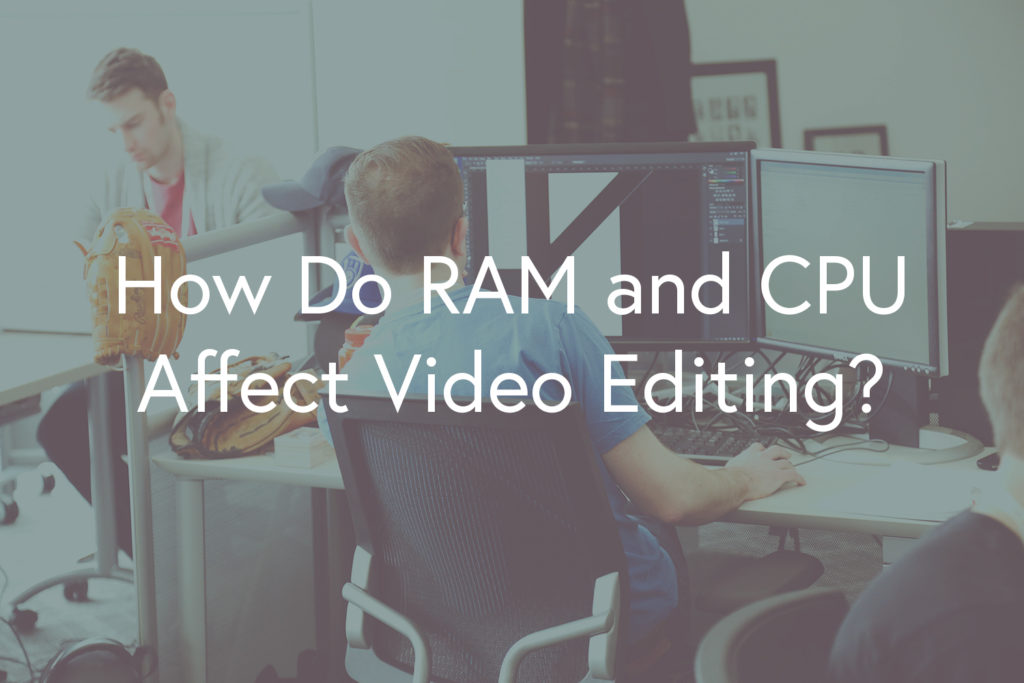 Computers are made up of many components, and some of them are particularly important for video editing! We’re going to cover the two most critical components – RAM and CPU. These two PC parts often determine how fast videos process and render and how well they play back.

Higher performing parts will give you smoother playback and faster render times. Find out how much RAM you’ll need for professional video editing. After reading this, you’ll know why your parts perform like they do so you can know where you may need to upgrade in the future. Image used in cover photo from StockSnap.io.

What Does a CPU DO?

CPU stands for Central Processing Unit, and that is a descriptive name. CPUs are essentially the brain of your computer that received tasks and processes them. Editing a file, rendering a video, and downloading updates all filter through the CPU to handle them directly or to divvy up tasks to other components that can handle them.

They use cores and threads to process tasks. A CPU core can handle one complex task, so the more cores you have, the more tasks your computer can process at once. Threads are virtual cores, which is a somewhat confusing concept. Essentially, threads help process instructions from programs for the cores to handle. They hold information, and allow the CPU to run tasks more efficiently. Most modern processors use simultaneous multithreading or hyperthreading, which splits cores into twice as many virtual cores. Certain applications can make use of more cores and threads to make programs run faster.

What Does a CPU Do for Video Editing?

When it comes to video editing, your CPU does a lot of the heavy lifting. It generates previews during the editing process so that you can see what you’re working on in real-time. It also encodes and exports videos, and how good your processor is determines how long your render times will be.

How to Pick a CPU for Video Editing

In a very general sense, you can tell how good a CPU will be for video editing and rendering based on how many cores and threads it has. There are exceptions of course, as newer technology is almost always more efficient than older technology, regardless of cores.

Based on the Puget Systems test referenced above, a 6-core CPU will be the sweet spot for getting into video editing in 2020, but a CPU with more cores won’t hurt. Depending on your budget, you should prioritize something with 6 cores minimum, and up to 8, 12, or 16 if you’re serious about editing and rendering.

If you want the best of the best, shop around in the newest two generations of processors from Intel or AMD, get something with multithreading, and don’t settle for less than 6 cores.

What Does RAM Do?

While CPUs are easy enough to understand, the function of RAM is often a bit harder to grasp, but it is an important aspect of any computer. RAM, or Random Access Memory, processes quick requests from applications that are currently running. It allows your computer to access multiple programs at once in a fast and efficient way. When you open a file or program, the operating system sends information from your storage drive to the RAM to process it.

What Does RAM Do for Video Editing?

RAM can do a lot for video editing. The higher resolution video you’re working with, the more RAM you need. RAM is also used in caching preview files for playback.

Since RAM is always working on something, you need to consider what else you’re running while editing. Additional open programs and web browser tabs will utilize some portion of RAM, meaning there is less to divvy up to your video editing program. On top of that, running your operating system also uses a significant chunk of RAM. Once you add everything up, your video editing program might not have a lot to work with if you’re only using a little bit of RAM in your system.

How Much RAM Do You Need for Video Editing?

In general, any brand of RAM will work for your video editing computer. The amount of RAM depends on your needs. 16GB is the minimum a video editor needs. If you are going to be working with 4K or higher resolutions, you should opt for 32GB or even 64GB. Some professionals may need even more.

While it is almost always cheaper to build something yourself (check out our article on building a 4K video editing PC for under $1000), there are great pre-built computers our there. This one from CyberPowerPC features a modern 8-core processor, 32GB of RAM, and a powerful RTX 2070 Super graphics card that you could keep to handle any 3D effects task you throw at it (and any game), or sell to then buy something less expensive and more reasonable for video editing.

2 Replies to “How Do RAM and CPU Affect Video Editing?”