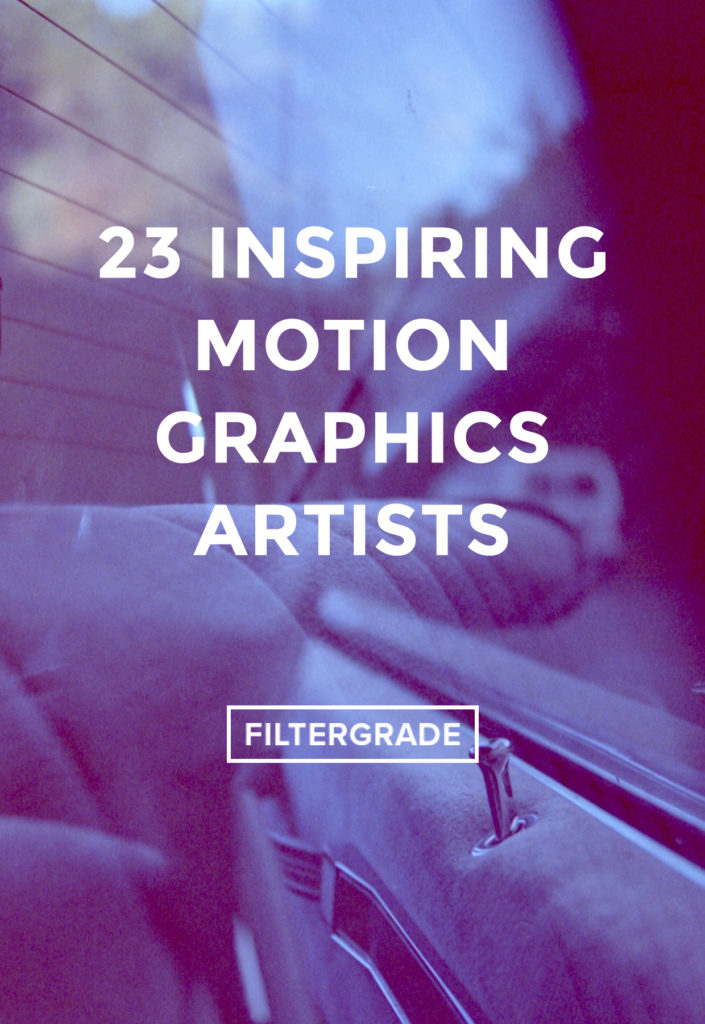 In this list, we’ll be covering 23 unique and inspiring motion graphics artists from all around the world.

Cub Studio is an animation studio based in London that was founded by Fraser Davidson and Ben Skinner. Featured above you can see some of their incredible work from 2017. View all Cub Studio Showreels.

Cub Studio has won numerous awards for their work, including a BAFTA. Their clients include the Super Bowl, NFL, Facebook, ESPN, HSBC, Dropbox, Expedia, and many more.

Mutoff is a Madrid-based digital designer specializing in motion graphics and 3D. Since 2017, he has worked to develop his creative style and considers himself to be the art director of his own projects.

Mutoff has worked with clients such as Prada, Adidas, Converse, and more. Watch his work that he created for Prada Milano’s spring release of the ‘Sandaland’ boot in this short clip above.

Award winning creative director, designer, and motion graphics artist Eric Jordan has been creating and pursuing his passions for 18+ years working with companies such as Panasonic, Nissan, Boeing, Warner Brothers, and many more.

His vast portfolio of work for some of the world’s top companies has spread far and wide and has influenced many. To see more of his work, feel free to check out his portfolio here.

Alexsander is an online designer focusing on User Experience/User Interface, interaction design, and motion graphics. He has worked with brands such as Fiat, Nike, and Calvin Klein and has also worked with individual talents such as DJ Khaled and Taylor Swift.

Digital Brew is a design and production studio that helps brands and companies reflect their brand and message through vision and appeal. From pre-production scripting all the way to motion graphics and special effects in post-production, Digital Brew has their video production down solid.

For more on Digital Brew, check out their showreel here.

Luna is a Toronto-based creative director working primarily on motion graphics, design, and 2D/3D animations. Working with companies like Nike, HGTV, and Shopify, Luna has been able to reimagine a brand’s identity and help them to bring their ideas to life.

Sebastian is a motion graphics designer, illustrator, and art director who has been working since 2001 in an international field for high-end clients such as Adidas, ESPN Network, Ford and more.

Alongside his client work, he has also been featured in numerous design publications and exhibitions worldwide. For an example of his motion design, watch a clip of some of his work for ESPN’s Major League Soccer Playoffs 2017.

Jeton Studio is a group of artists and designers who have come together as a team to create motion graphics, animations, advertising campaigns, and more for clients such as Nike, Bose, TNT. and more.

Dias is an art director and motion artist working to help out companies such as Nike, Adidas, Intel, and more. Her work focuses heavily on well-styled frames with key elements strategically placed in sight to help assemble the whole project.

For more of her work, take a look at her Instagram as well.

Gloria is a motion graphics designer and art director from Berlin, Germany. Using fun animations and engaging effects, Gloria is able to make short clips for various companies to help them promote their products and services.

Check out this short animation that Gloria made for Ryanair!

Cristina Barna is a passionate Italian art director and motion graphics designer based out of New York City and working for the Gentleman Scholar.

The work she is creating now stems from her years of creativity in concepting, designing, and directing ideas to bring them to life.

The team at Negra are incredible idea creators and story tellers who help clients evolve their brand.

Rather than just convey what a company provides or sells, the team at Negra shows how they are changing the way of their industry; how they are innovating, not just existing.

Negra has worked with clients such as Nickelodeon, Siemen’s, and MTV. Be sure to check out more of their work on Vimeo here.

Inspiring millions with his incredible videos and unique motion graphics, Cole Bennett set foot in the music industry nearly four years ago with one goal in mind – “turn dreams into realities.”

Over the past years he’s done this not only for himself, but for his team and many of the artists in his music videos by visualizing the emotions and feelings that his artists and friends are portraying in their songs. For more on Cole Bennett, check out his YouTube channel.

For over 10 years Maloku has been working as a motion graphics artist, collaborating with companies such as Microsoft, Blue Cross & Blue Shield, Lexus, and more to help bring his client’s visions to life.

He has won many awards for his craft and continues to work and pursue his creativity. For more on Ridvan, check out his tutorials here!

Specializing in 2D motion graphics, design, and illustration for TV, web, and other interactive medias, Jerry Liu has worked with many companies and agencies such as ESPN, Spotify, and Google to help provide visuals and graphics to engage their users.

Working as a director, designer, and animator, Fridman envisions ideas and brings them to reality. Whether he’s creating videos for clients or working on the graphics and design, he always has unique visuals, helping his clients stand out from other competitors.

Fridman has worked with companies such as the Boston Consulting Group, Visa, and Capital One.

Boyce is a self-taught motion graphics designer based out of London who has been working in the industry for almost three years now and has worked on various projects for Interstellar, CNN, Shell Gas, and many others.

Working as a motion graphics designer, animator, and art director for the past decade has amassed a diverse range of clients with many different projects.

Francis is based in London and has worked with companies such as the BBC, Google, Cancer Research UK, and more.

Greenwood is an artist and motion graphics designer with over 11 years of experience working with clients such as Toyota, BMW, Movember, Ford, and more.

Also working on many solo projects as a photographer and videographer, Matt Greenwood has been able to connect and work with many unique people throughout the world.

For more on Matt Greenwood, check out his personal project “Take Picture, Don’t Steal” where Greenwood hangs up disposable cameras throughout varies cities to document the community through the eyes of the community.

Down the street is an animation and illustration studio based out of Los Angeles, California. The team consists of three friends and graduates of California State University whom now work together to create incredible visuals and graphics for clients like Microsoft, Wall Street Journal, USA Today, and many more.

Arthur Navet is a French motion graphics artist working over the past few years with agencies all throughout France. Take a look at his motion graphics showreel above to see some prime examples of his work!

Braga is a visual story-teller and art director based in Australia who has won awards from Adobe, Vega, ADC, and more.

Check out his showreel to see some great examples of his motion design work above.

We hope you enjoyed our list with some of the best motion graphics artists from around the world! Feel free to leave a comment with your favorite designer on our list and let us know why. :)

For more inspiring photographers, videographers, and websites check out these articles as well: