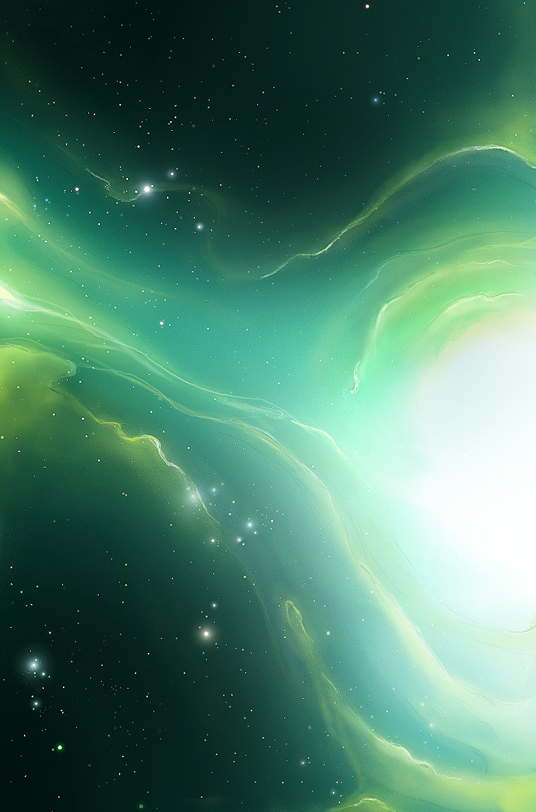 When it comes to photo editing, the first thing that some people gravitate toward is making space-inspired Photoshop manipulations. Often it’s very easy to create an impressive-looking space-themed image in Photoshop, making them an easy draw for beginners. But, the more advanced artists creating work in this area can make some truly impressive pieces. These pieces are seen on concert posters, tattoos, advertisements, and computer wallpapers everywhere. Today we’ll be looking at 21 awesome space-inspired Photoshop manipulations that will make your jaw drop! 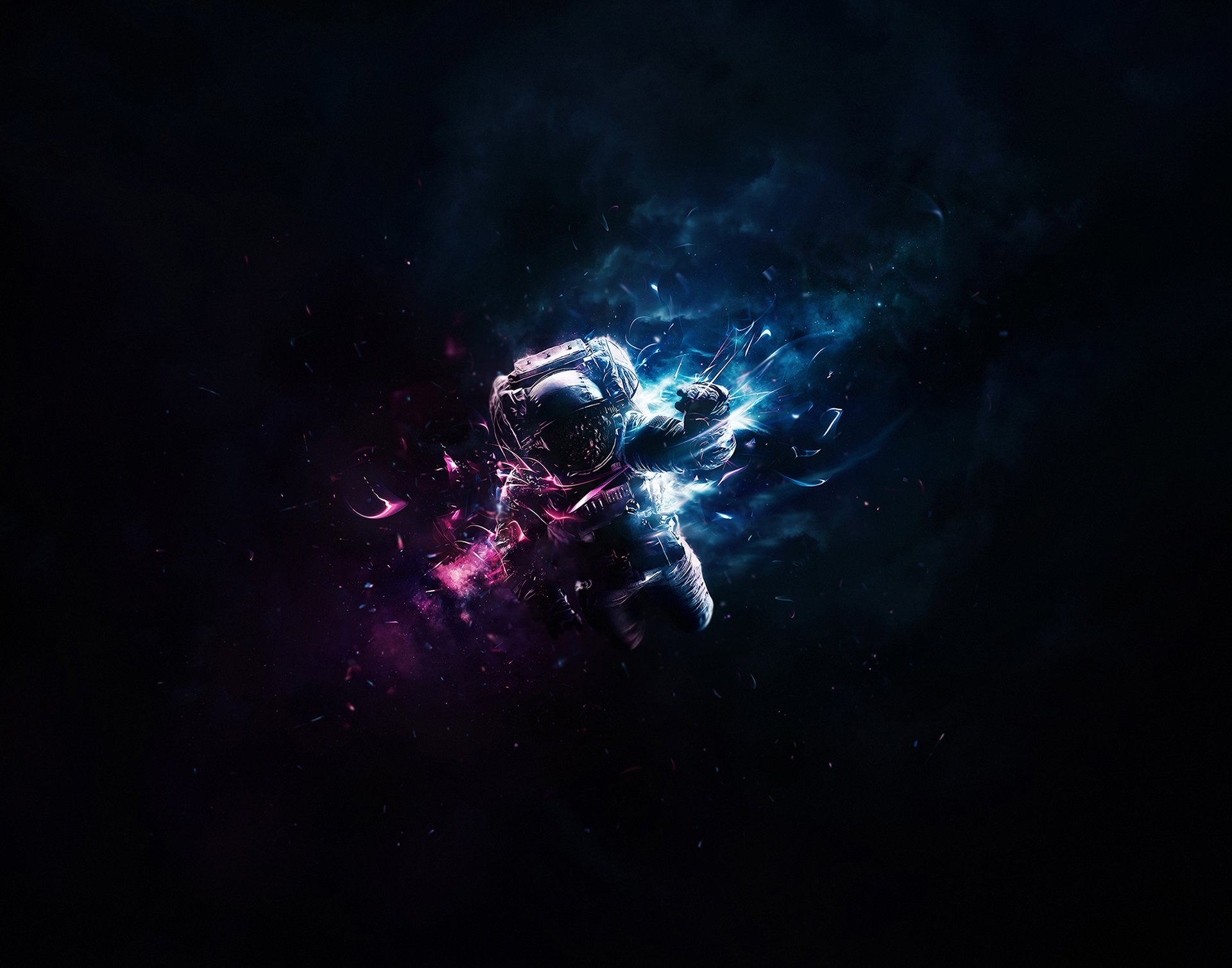 Via Kevin Roodhorst on Behance

2. A Head Exploding with Nature 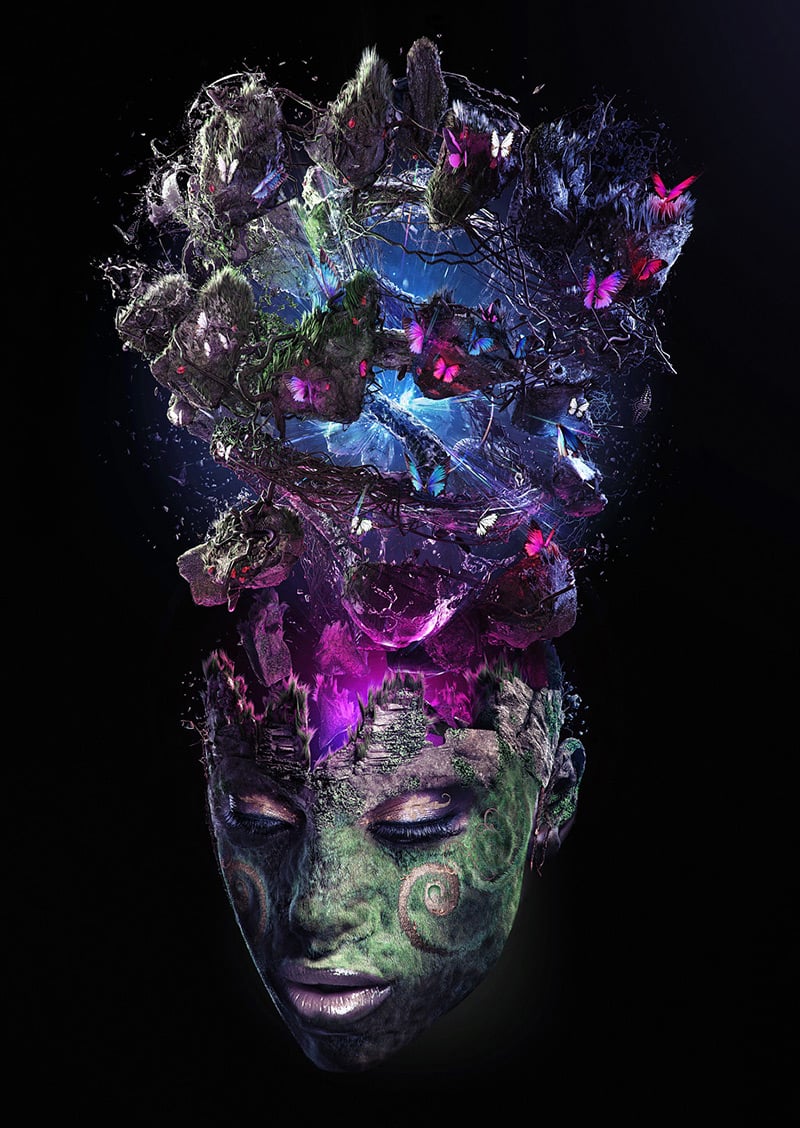 What was once just a head is now bursting with a plethora of tiny details. Bits of earth and glowing explosions of light are featured prominently in this image.

3. First Light on an Alien Horizon 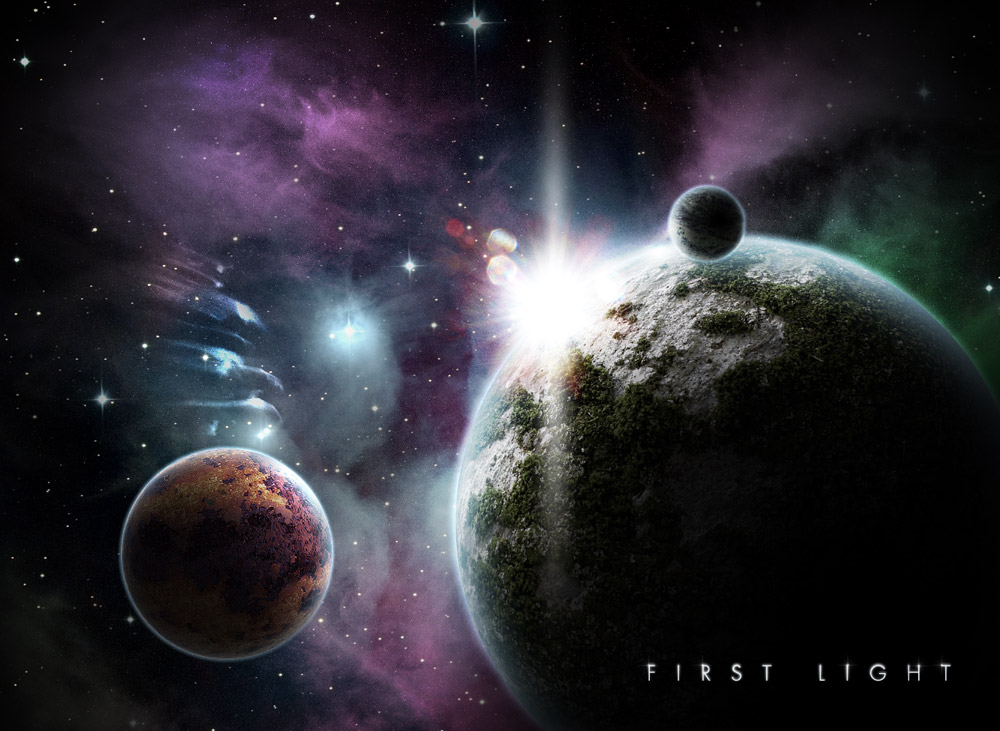 This image is appropriately title First Light. It shows a sun rising over the horizon of a mysterious planet.  There are lots of tiny surprised littered throughout the space in this creation.

4. A Total Eclipse Ring of Light 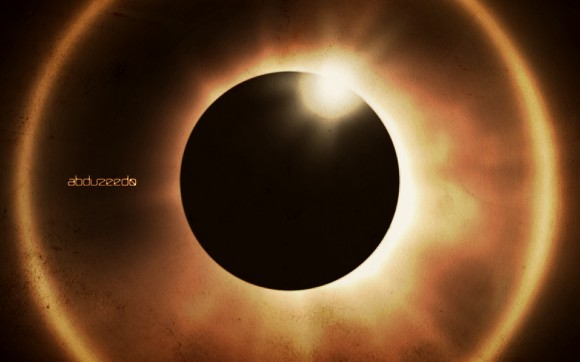 A relatively simple image to make, this eclipse halo is still an epic creation. Just use some shapes and layer effects to create this! Follow along with the full Photoshop tutorial on Abduzeedo.

5. Astronaut Surrounded by Asteroids and Lights 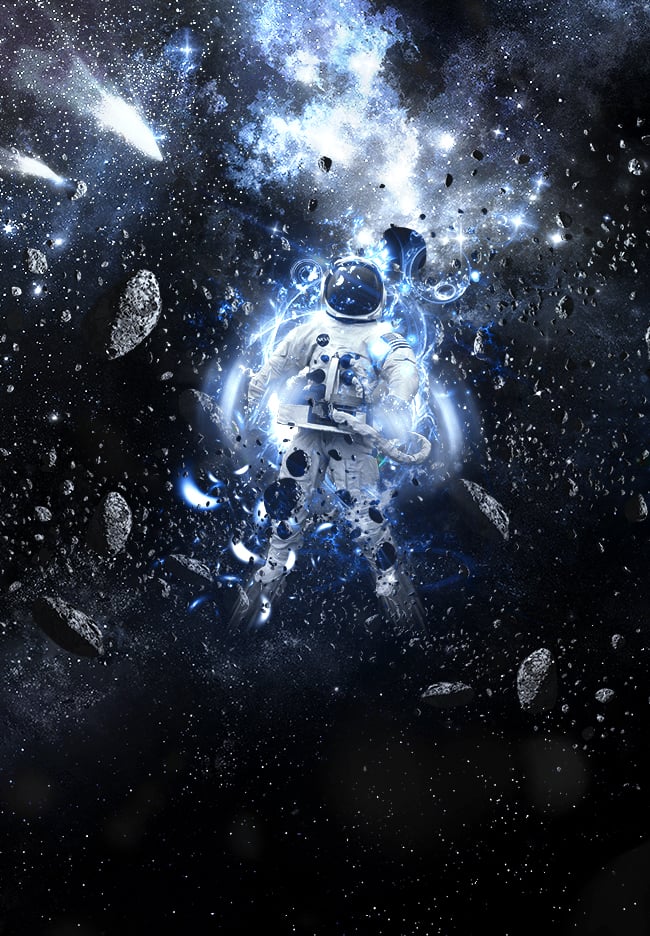 This image features an astronaut swirling with blue energy, amidst a field of asteroids. The real image of an astronaut blends perfectly into this edit.

A truly imposing image! This sun about to engulf a much smaller planet is an impressive image. It looks like there was a lot of work behind it. In reality, it may be simpler that it looks! 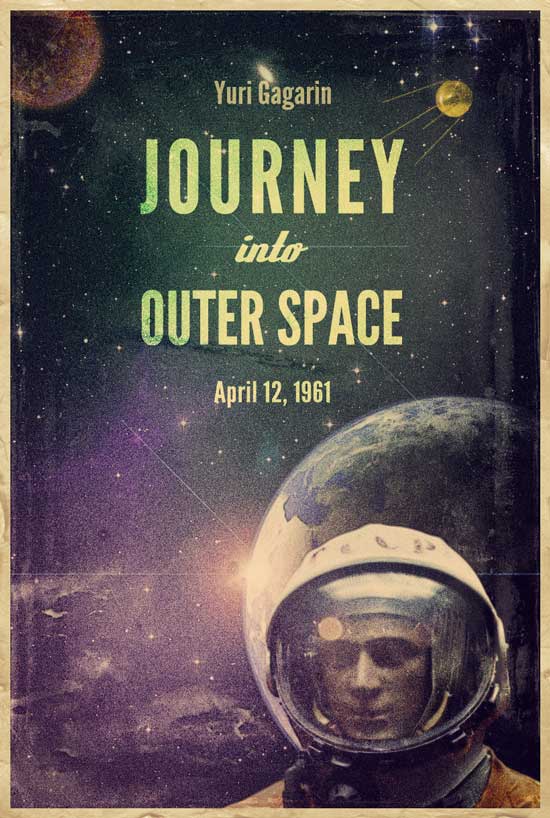 Here’s something different. This  is a vintage space poster that without its noise filters, might look as modern as the other images presented here.

8. Earth Impacted by a Asteroids 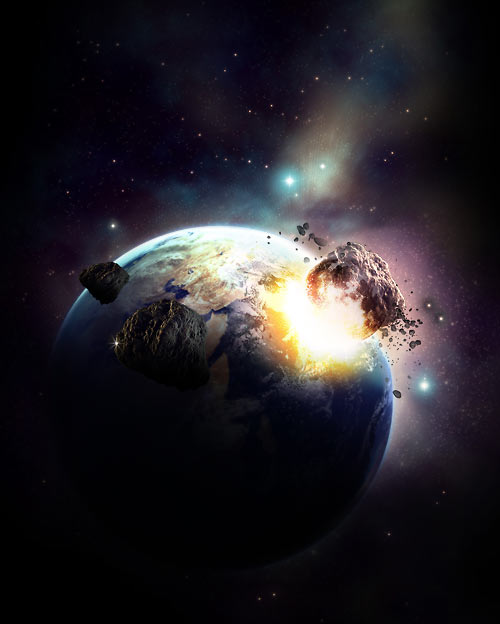 An uncomfortable thought, this image is the earth being impacted by asteroids. From the background space effects to the impact effects, this is an impressive edit.

For a more hand-drawn look, check out these green swirls made with various Photoshop brush heads. 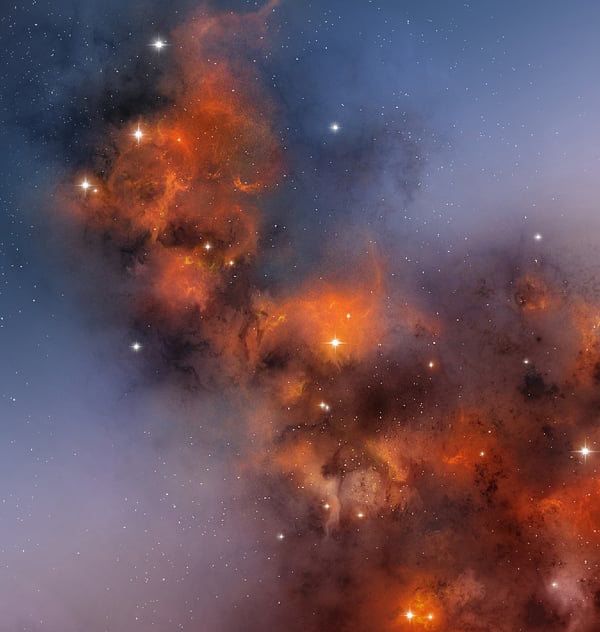 These star-flecked red clouds are all about painting dust and adding highlights and shadows. It’s a complicated looking piece but definitely impressive! 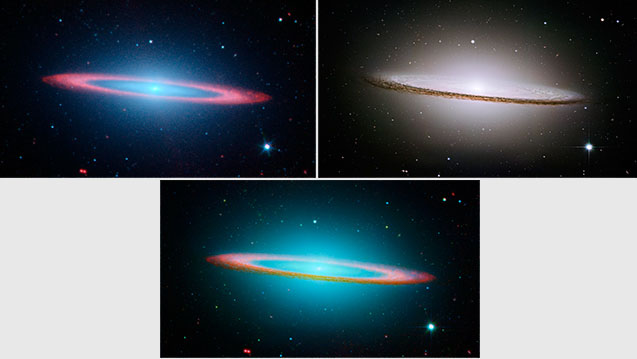 Space can be beautiful enough on its own, but a little Photoshop can go a long way. The images above are an infrared and a visible light image combined in Photoshop to create an HDR image of sorts. The final image of the Sombrero Galaxy is stunning. It’s something that could have been created from scratch. 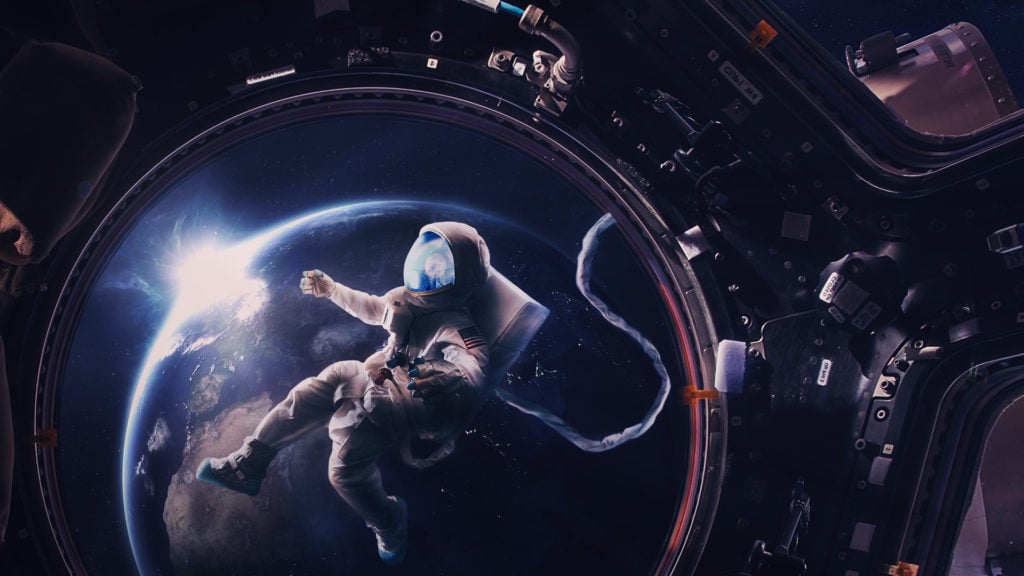 Via Andrew Adel on Behance

This image of an astronaut floating in space is an amalgamation of several images, including a window, the earth, and an astronaut. The final result looks natural and slightly disconcerting! 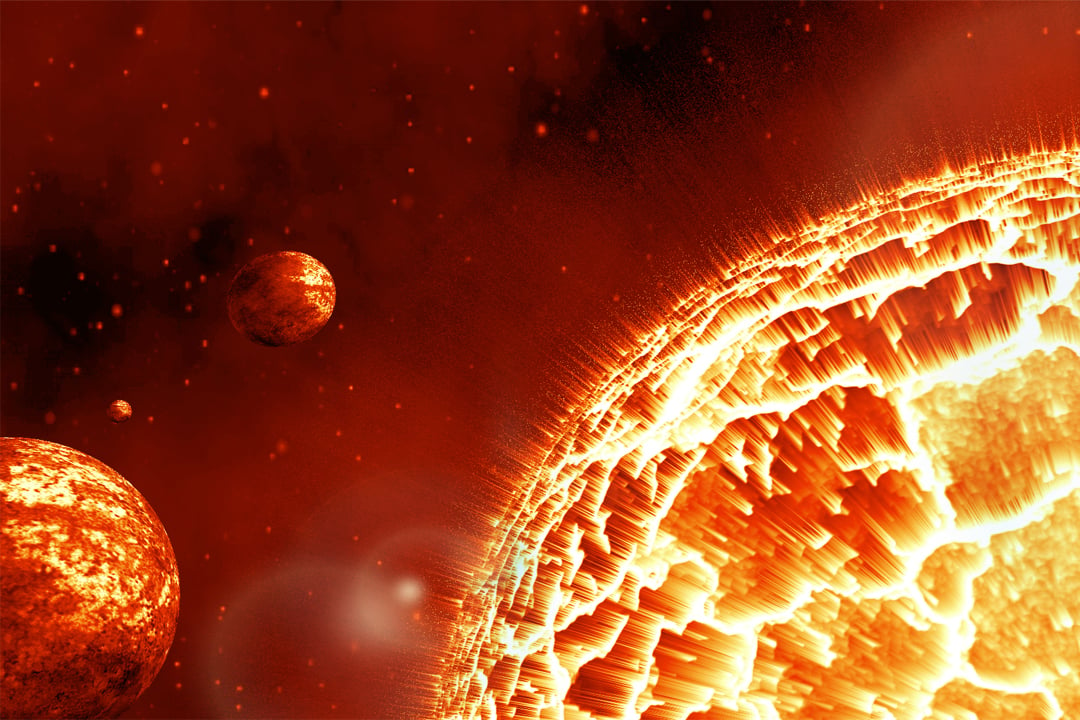 This image is made using stars and planets created through textures and filters. These objects were used expertly to make a red and emotional scene of a solar system. This space galaxy explosion composition involves using various blend modes and effects to create a glowing image. 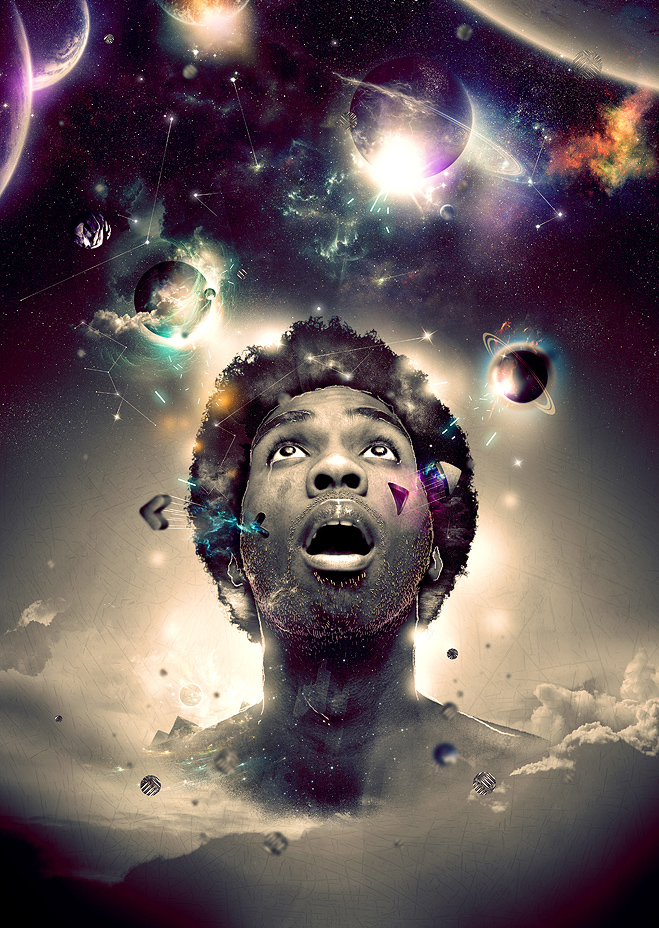 Via Craig Shields on Depthcore

There is a lot going on in this image. A man gazes straight up in shock at a series of glowing planets. From the color grading to the light particle effects, this is an image full of surprises. 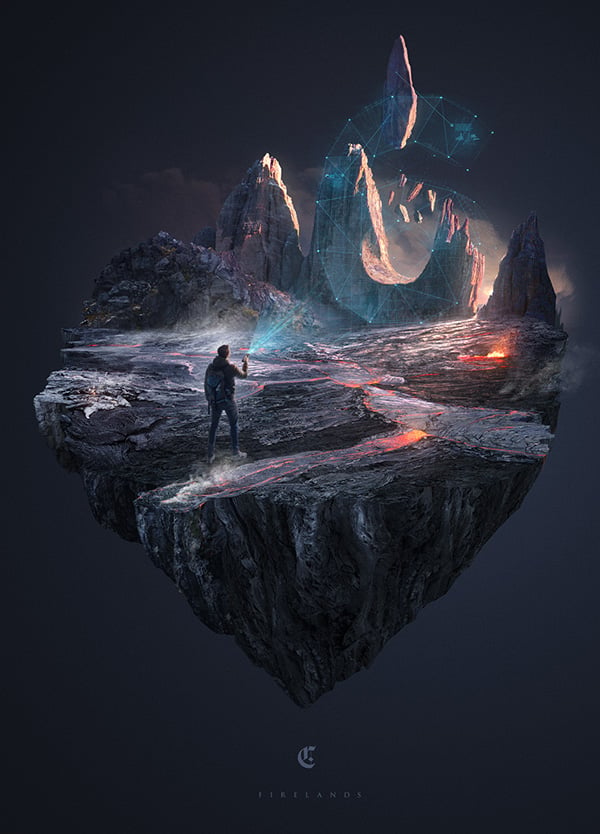 Via Roberto De Rose on Behance

This surreal sci-fi image features a man standing on a lava-filled rock floating in space, with a number six being scanned. Who knows what’s happening in this image, but it is certainly impressive! 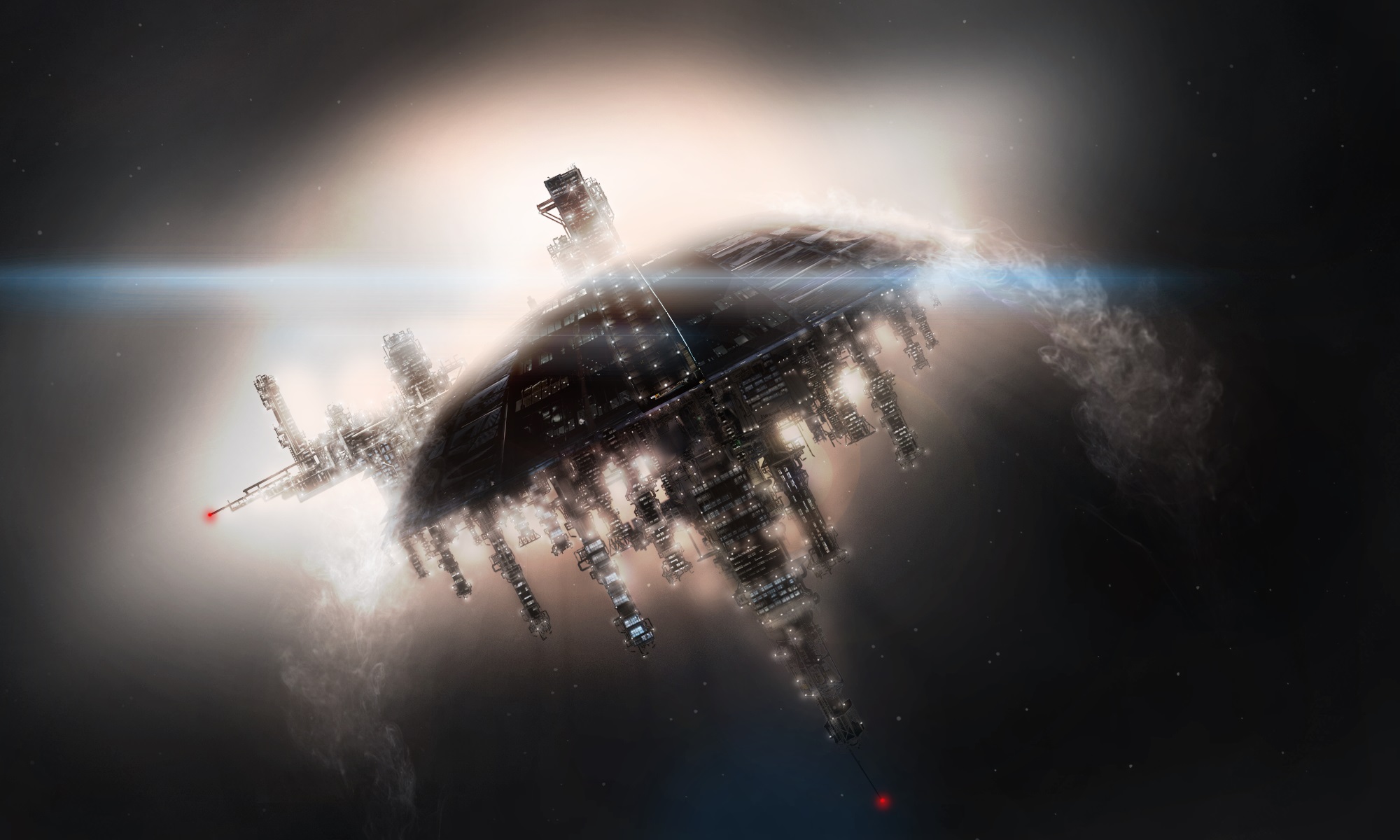 This space station is made from a variety of parts cobbled together and with a lot of adjustments applied to them. The end result is something that looks like a convincing piece from a sci-fi movie! 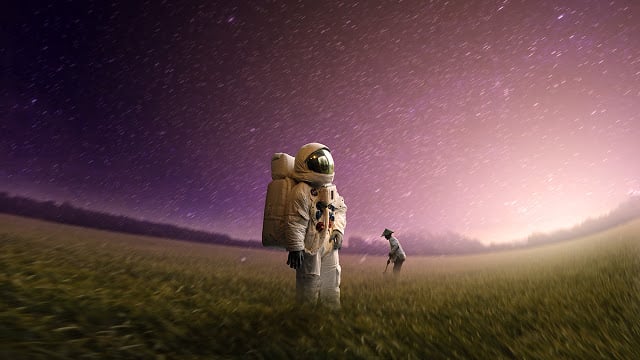 This image of a confused astronaut is both surreal and impressive. It also looks fairly simple to create. Go ahead and give an image like this a try! 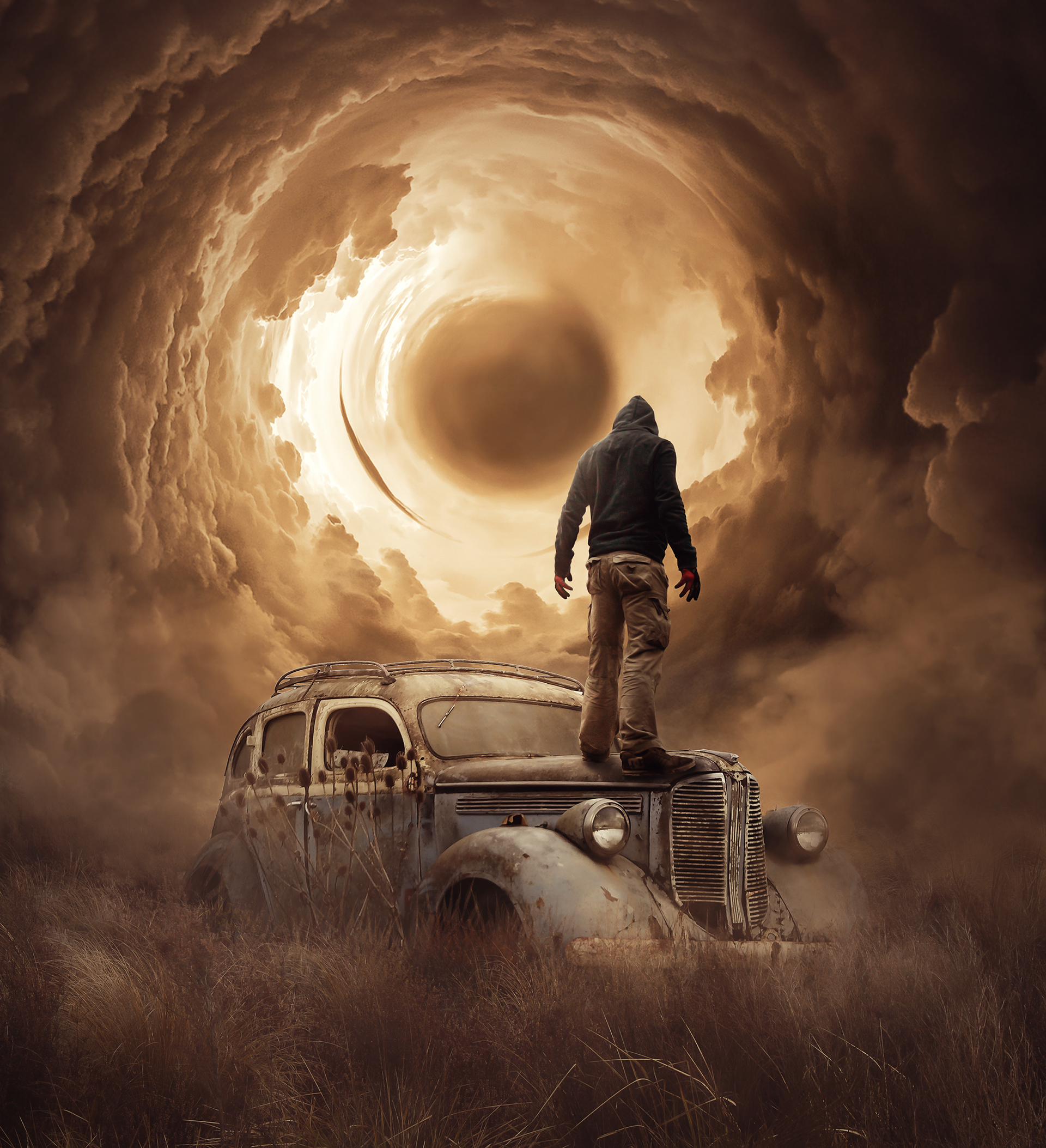 Via Nik Buzhan on Behance

This photo manipulation features a man standing on a car in a dusty field, while a swirling portal of dust looms overhead. The man and the car look like separate images composited together, but all of the elements blend nicely into a final image. 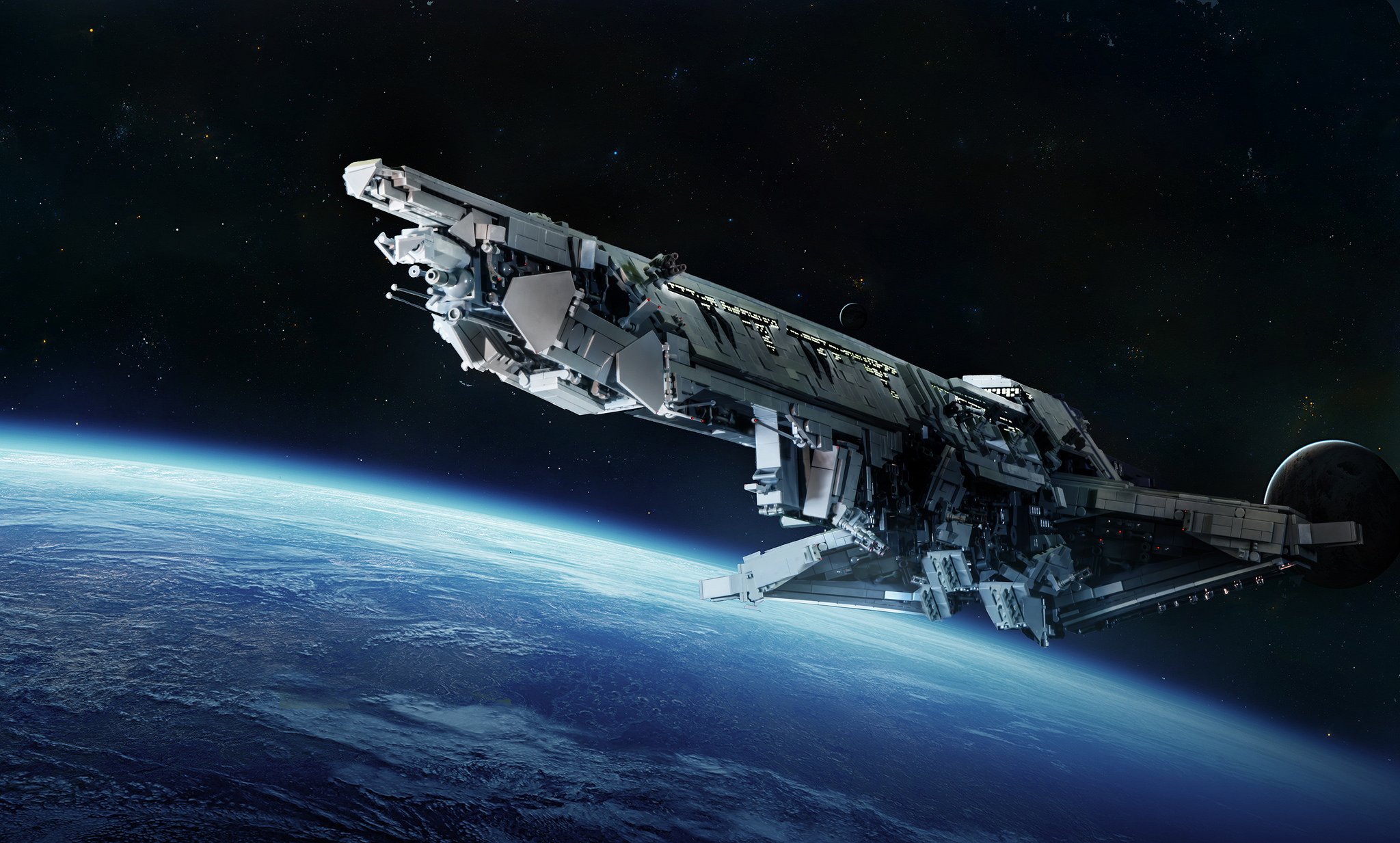 This sci-fi ship is made out of Lego! It blends perfectly with the space background, with the designer expertly adding lighting effects to his model to make it appear naturally in the scene. 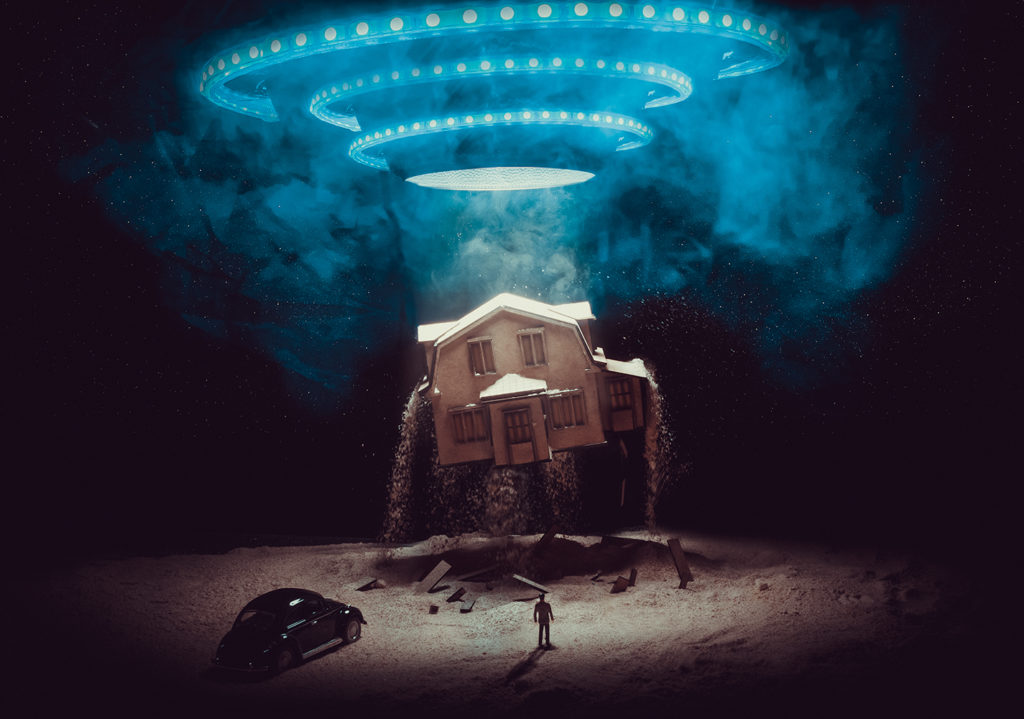 Via Amr Elshamy on Behance

This whimsical image is made using scale models and awesome Photoshop effects! This is a great example of mixed media, and will get you thinking about using practical effects rather than just stock images to create something great. 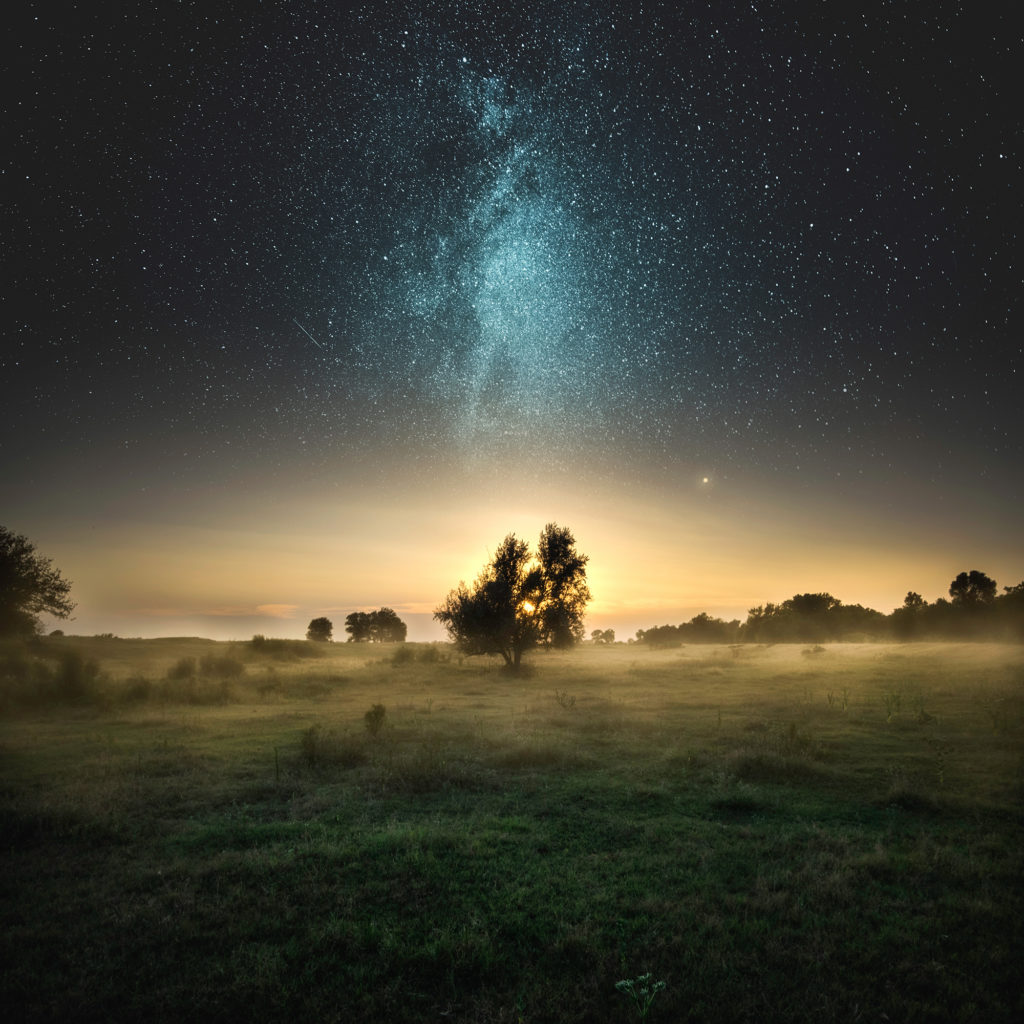 For our last image, here is something from Photoshop themselves. This is a relatively simple composite photo of a foggy plain and a starfield, resulting in a stunning sunrise scene.