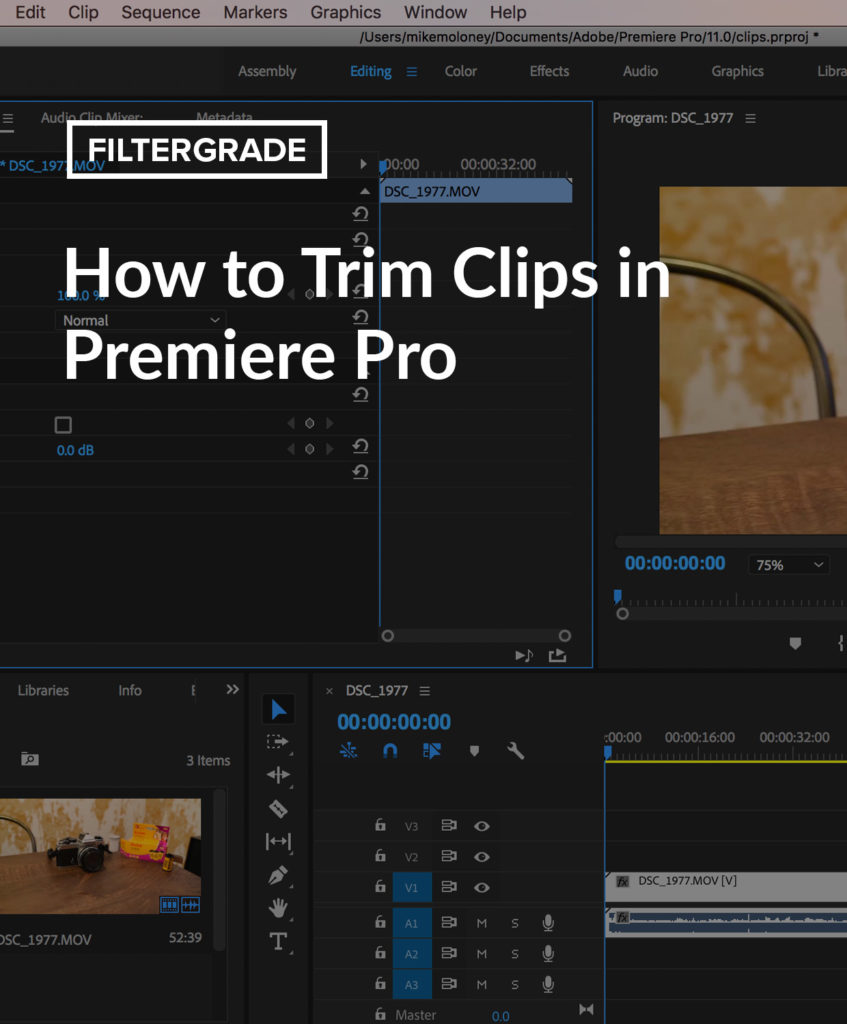 Adobe Premiere Pro is one of the best video editors out there, and certainly one of the most popular. That popularity isn’t just due to the Adobe name, though. It’s also very easy to learn and start editing amazing pieces of film. Today we will be going over one of the essential functions of Premiere, the one function that lets you even start editing in the first place – how to cut video in Premiere Pro!

A Note on Terminology

The word “trim” will be used frequently in this article. It is important to know that Adobe Premiere Pro uses this term as both an additive and subtractive action, rather than the normal connotation of subtracting from something. So, trimming can be done forwards or backwards, to extend or shorten the clip, respectively.

In and Out Points

The first way to trim clips actually happens before you even drag a clip into your timeline. Often your footage will have a lot of unusable footage at the start and end of the clip. This process is actually quite simple, despite forcing you to do a bit of editing outside of the traditional methods. Just double click the clip from your project panel and it will open in the Source Monitor. There will be a blue slider that you can move around to accurately select Mark In and Mark Out points. These points are where the clip will start and end when you drag it into your timeline. You don’t have to be totally accurate since you can always edit further in the timeline, but this will give you a much cleaner piece to work with.

The advantage of this method is that your footage will be much easier to work with when you get down to the real editing. If you pre-trim clips to just have the usable footage, you will only drag that trimmed portion into your timeline. This is especially useful if you may have to use a certain clip more than once, or if you have a lot of dead space at the start and end of your footage.

You can move the In and Out points together, by dragging the In/Out Grip, which is shown by three lines in the center of the two points. This keeps the duration the same, while moving the points themselves.

In case you put a point in the wrong spot, you have a few options. If you simply dragged the point to the wrong frame, you can drag the In or Out point bracket to a different time. If you want to get rid of it entirely, select Markers then Clear In, Clear Out, or Clear In and Out, depending on which markers you would like to clear. This won’t work on clips already in the timeline.

Trimming in the Timeline

It’s easy to cut video in Premiere in the timeline, and the program gives you a few different tools to work with. What you use will depend on what kind of trimming you need to do. The easiest way is with the Selection tool in use. Simply click and drag an edit point on your timeline, and the clip will extend or shorten with the Trim-in or Trim-out icon, depending on which direction you drag, and if there is footage to spare. If you shorten the clip, you may find that you now have a gap between clips. With some of the other trimming methods, you can avoid this problem.

You can use the Ripple Edit tool to trim clips, which works in much the same way as using the Trim-in and Trim-out methods with the Selection tool. However, this tool will automatically fill any gaps. For example, if you want to trim the end of a clip, it will shift everything after it in the timeline to the left to fill in the gap. If your only goal is to fill the gap, this is perfect. But this tool won’t be useful if you need to stay in sync with a music track, since all of your work that can be moved over will be.

Holding down on the Ripple Edit button reveals other options, including the Rolling Edit tool. This is a similar tool to the Ripple Edit, but will not shift any clips around. If you want to trim the end of a clip, trimming with the Rolling Edit tool will fill in the gap by extending the corresponding end of the next clip. The tool will only let you trim as much as can be filled in, so this won’t work if your other clip is marked In at the very beginning of its source clip. Think of this like how a Fade effect works; a fade requires a bit of extra footage so that the important parts before and after the fade don’t get cut off.

Trimming in the Program Monitor

Another similar way to cut video in Premiere is in the Program Monitor. This is where your timeline plays back. By double clicking near an edit point, the Program Monitor will convert to Trim mode. You will see buttons with ‘1’ and ‘5’ on them. This is to trim by 1 or 5 frames at a time, respectively. This mode allows you to get very precise, but is really a matter of preference.

The trimming tools will work the same in Trim mode, but by using them on the actual footage in the Program Monitor. Play around with both methods, and see which suits your style more.

If you want to edit multiple edit points at once, select the edit tool you want and select edit points while holding the Shift key. Then you can Ripple or Rolling Edit all of these at once, for example if you wanted to cut or extend several overlapping clips to the same point on the timeline.

It is pretty easy to cut video in Premiere Pro, and Adobe gives you multiple ways to do so. Experiment with these different methods, and find what situations call for the use of certain tools. Trimming is one of the most basic video editing functions, and mastering it will make editing so much faster!